Each year, we commission a different artist to create our Annual cover. The process starts with a simple brief – to create a letter ‘A’ – but artists have interpreted this in a surprising range of ways, rendering the letter in everything from pollen to ice and solid marble.

“Annual collaborators tend to be unique in their field, and doing something creatively that really intrigues or excites us,” explains our Art Director Paul Pensom.

“We’re always looking for people who can bring a different angle to the Annual. We’ve gone from warehouse to microscopic-sized type made from living cells, from crowdsourced interactive digital letterforms to solid marble, and pretty much everything inbetween. We always try to break new ground.”

This year, we went one step further, teaming up with HP and New York-based artist and designer Alex Trochut to create a one-of-a-kind cover for each copy of the issue.

The cover was created using HP Mosaic – a software which can be used to produce unlimited variations of a design in a single print run.

After discussing the possibilities of Mosaic with HP, we invited Trochut – who has created album covers for Katy Perry and The Rolling Stones as well as artwork for the likes of Nike and The New York Times – to create a design using the software.

Long-time CR readers might remember our 2012 collaboration with Trochut, when he created an illustration inspired by Franco Grignoni’s Woolmark icon for the cover of our Logos issue. The project took Trochut in a new visual direction, inspiring him to explore line-based Op Art – a style that we felt would be well suited to this project.

“Alex has long been one of our favourite typographic artists,” says Pensom. “His cover for our Logos issue was one of the most memorable of recent years and we agreed immediately that his Op Art/Lance Wyman-influenced aesthetic would be a good fit. Alex is fantastic on colour too, so I knew he’d be able to to get the very best out of HP’s proprietary inks,” he adds.

Trochut’s cover design builds on his ongoing experiments with RGB colour channels. “I’ve always been a big fan of Op Art – Franco Grignani especially and these striking black-and-white illustrations where the repetition of lines creates an effect that becomes the concept of the artwork itself,” he tells CR.

“I wanted to bring colour into this and after playing with RGB channels, I found that if you separate the RGB [components of] a black-and-white image, you get this fractionalisation of colour,” he explains.

The resulting effect reminded Trochut of the work of Carlos Cruz-Diez, the Venezuelan artist known for his vibrant kinetic artworks which reveal new colours as viewers move around them. “This is a different technique but it’s close – [though] with this, you can use more colours and bend lines,” he adds.

He has since used the technique to create a range of striking designs, some with straight lines and some curved. “I’m still very much developing this language, and I’m trying not to put meaning to it. It’s just nice to look at,” he adds.

After developing the concept, Trochut fed his design into Mosaic along with possible colour options (users can set parameters within the software to ensure a degree of control over the outcome). The program then generated thousands of variations by switching up colours and manipulating aspects of Trochut’s design.

The project is the first time Trochut has experimented with Mosaic. Artificial Intelligence is something that has been met with a degree of fear in the creative industries, but Trochut sees Mosaic as an example of how this technology can help the creative process.

“The fact that you can have this collaboration with an algorithm is a good side of the future that I didn’t foresee,” he says. 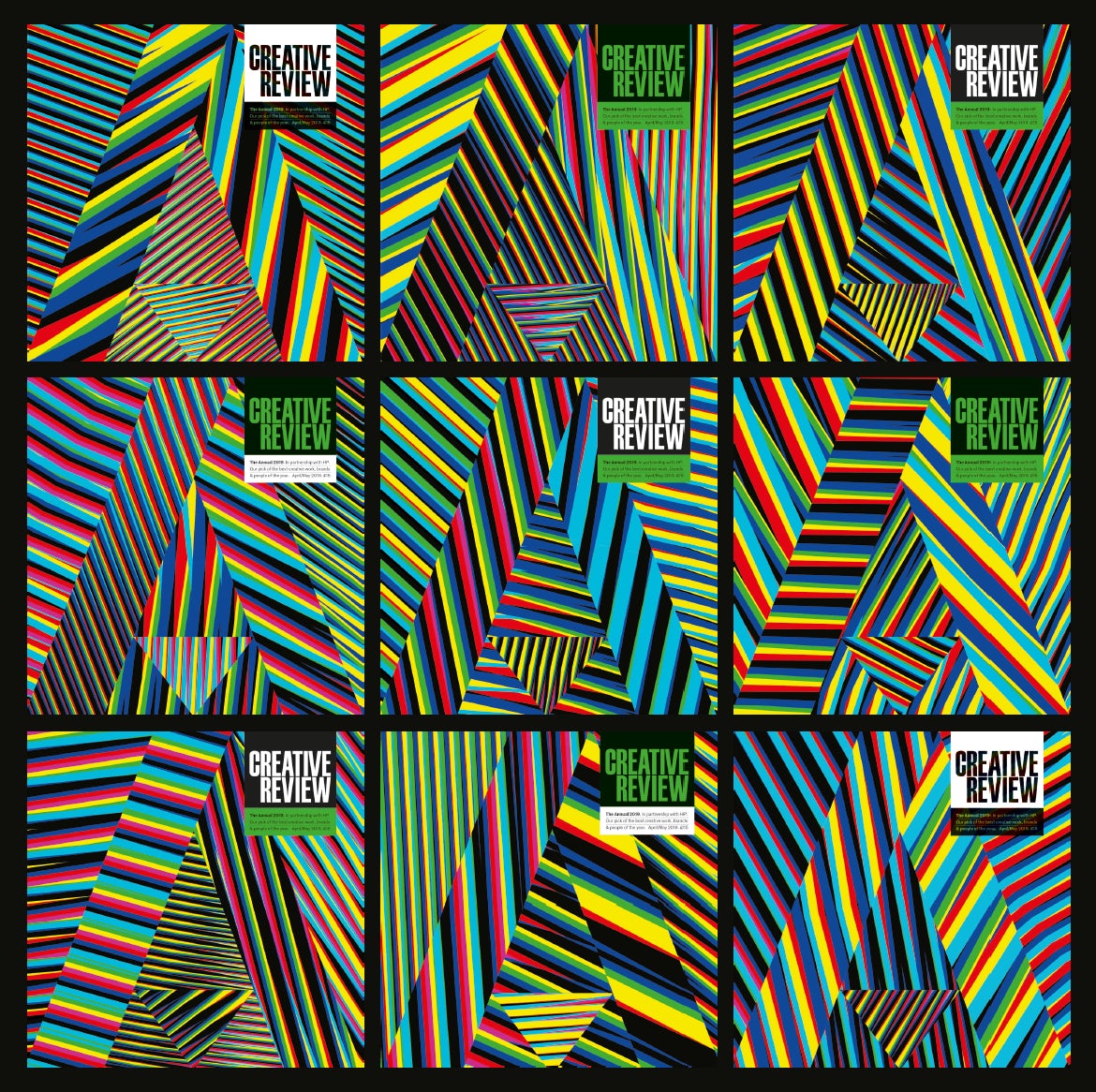 “When I work, I like to look at many variations and choose the one that somehow has that perfect accident, because often, the best ideas don’t come from your intentions – you just see something and you think, ‘that’s beautiful’. The fact that [with Mosaic] you can allow a machine to place factors, and make different combinations and select the best one from that is exciting. There are so many options that you wouldn’t create yourself.”

Trochut worked closely with HP throughout the process, speaking with software engineers to understand how Mosaic works. The cover was printed by London printer F.E. Burman using proprietary inks developed by HP.