Football had been put on ice for months while the coronavirus pandemic took hold around the world. But just in time for the lifting of lockdowns, and the restart of leagues, Berlin-based football app OneFootball is unveiling a fresh look developed by DesignStudio that aims to capture the spirit of its Gen Z target audience.

DesignStudio teamed with insights and straetegy consultancy Crowd DNA to unpack OneFootball’s audience and decipher what their rituals, passions and preferences are.

“[OneFootball] needed a brand that adapted to Generation Z,” explains Vinay Mistry, design director at DesignStudio. “Generation Z is a generation of contrasts: they’re constantly adapting, they’re constantly changing, and football’s actually very similar. The rhythm of the game changes constantly as well. It made us think, actually there’s some lovely synergy there – can we define a personality for OneFootball that represents that?”

At the core of the project was the creation of a new logo. While researching the existing logo, the design team noticed its resemblance to the pictograms developed for the 1972 Olympic Games held in Munich, and also felt it was too similar to WhatsApp’s logo.

However, the team didn’t scrap the old logo altogether. Instead, they broke it down to its key parts – legs and football – and repurposed these elements into a new graphic forming a number one and a football in reference to the brand name. The new design is immediately more contemporary, partly because it does away with the gendered implications of the old logo. 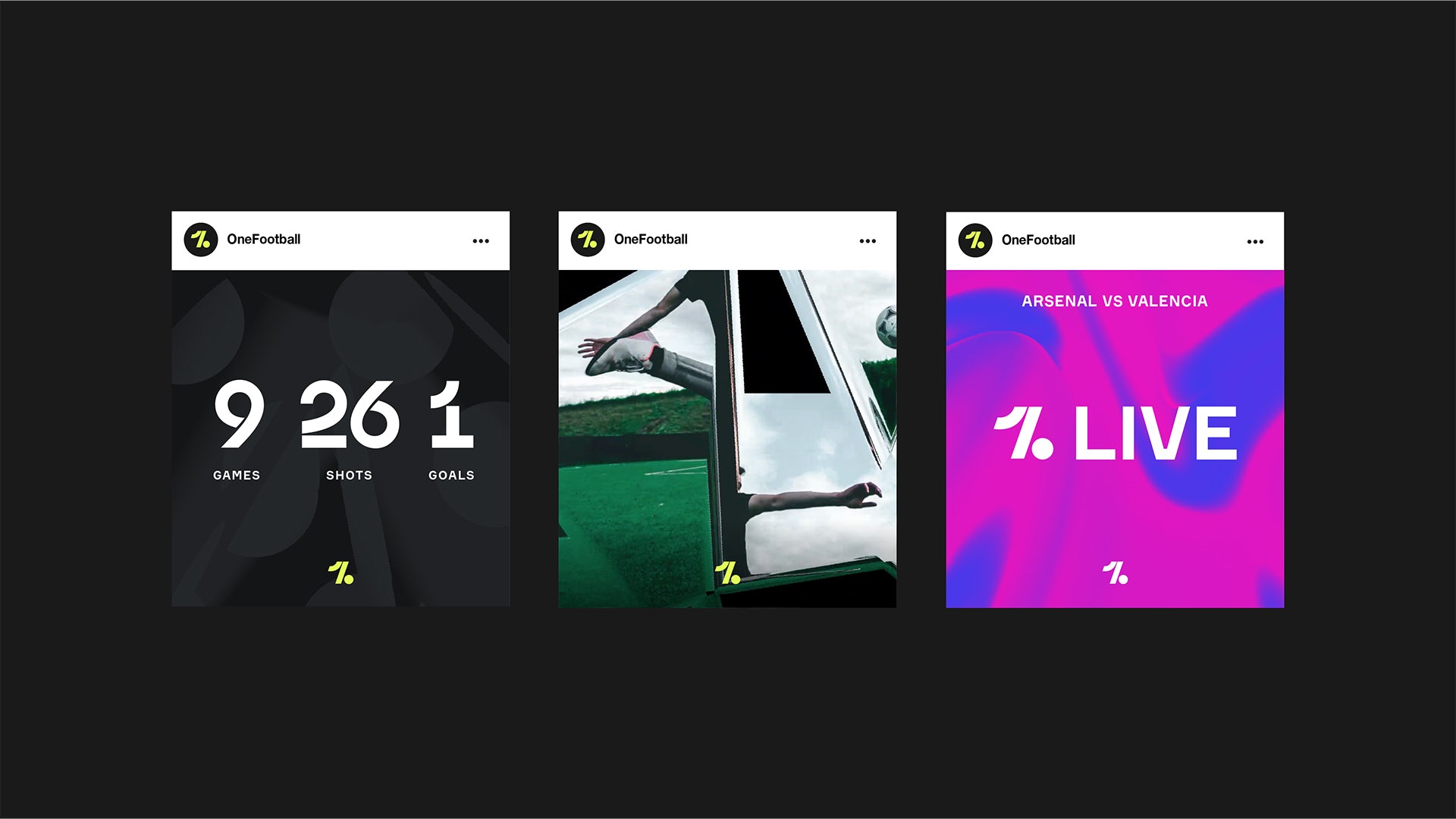 The visual language and tone of voice has been constructed around the concept of a ‘vibesmith’, someone who knows how to hype a crowd. “This ‘vibesmith’ – OneFootball – they’re the people that understand the mood. They set the tone, and they generate the buzz before the game, after the game, during the game,” Mistry explains.

The team aimed to create an identity that was adaptable, and could be used to transmit big events, such as goals or transfer news, but also convey quieter moments. Key to this was the development of a generator that produces bespoke visuals, created by DesignStudio and interactive studio Artificial Rome.

The generator takes inputs – a logo, pattern, photograph or type – that can be transformed by rotating, multiplying or changing the colour. The resulting visual can then be enhanced by altering the character and animation style based on a sliding scale, or “hype dial”, that goes from Fracture, Neutral to Flux.

“This generator actually creates every single visual that you see in OneFootball,” he adds, “so every single pattern that you have, the typography, when it starts to move around or glitch, it’s all coming from that one generator.” The tool immediately expands OneFootball’s visual language, with an outcome that feels truly dynamic with little effort.

The redesign is launching to coincide with the return of leagues in Europe, something fans around the world have been eagerly awaiting for months. While the Premier League and its counterparts have kicked off again, the impact of Covid-19 is still felt, namely in the empty stadiums and artificial crowd sounds. The situation isn’t lost on OneFootball either, which has adjusted its new merchandise range accordingly. “A few weeks ago they actually sent me a OneFootball face mask,” Mistry says. “It’s moved on from tote bags to face masks!” 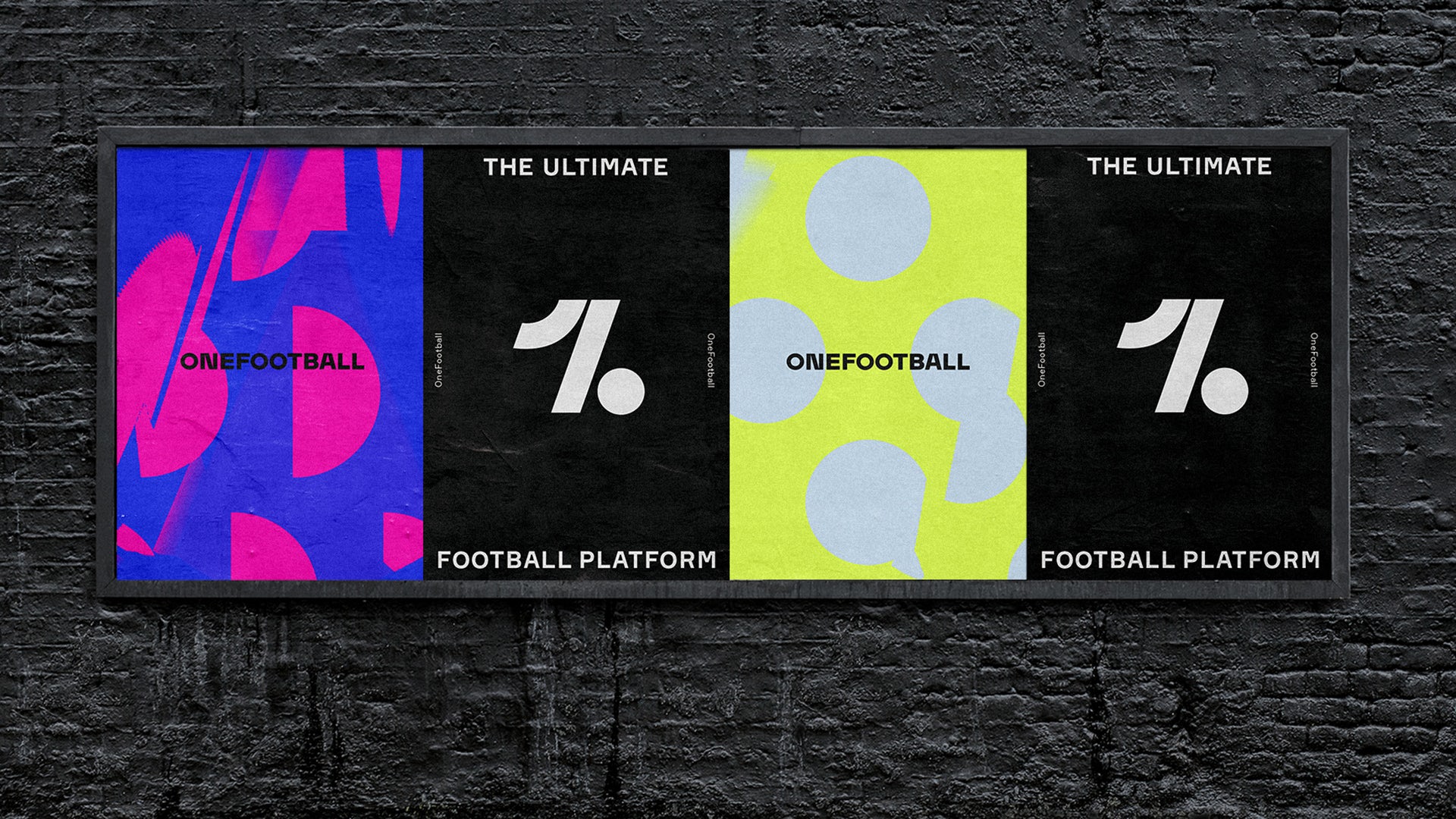 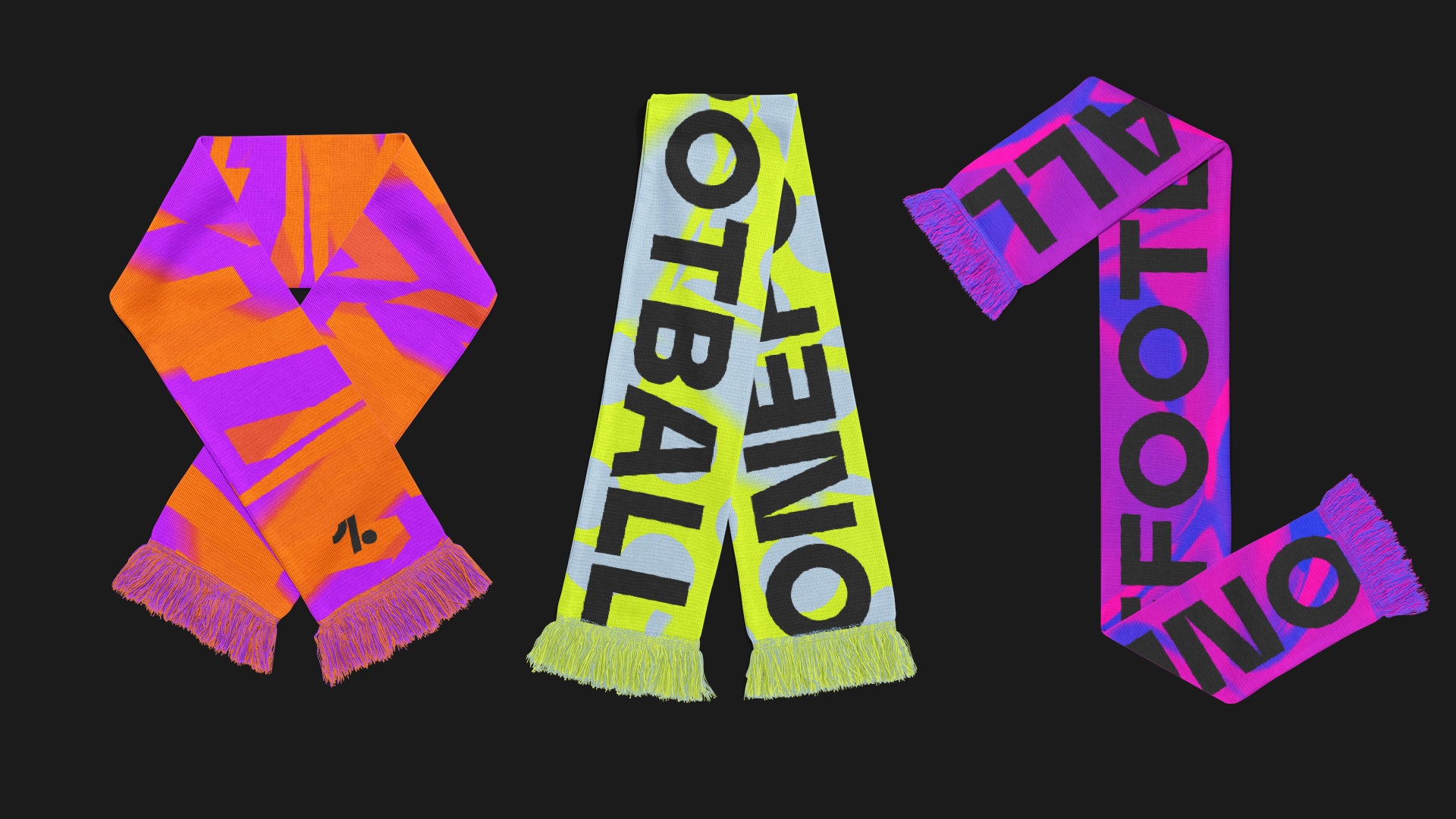 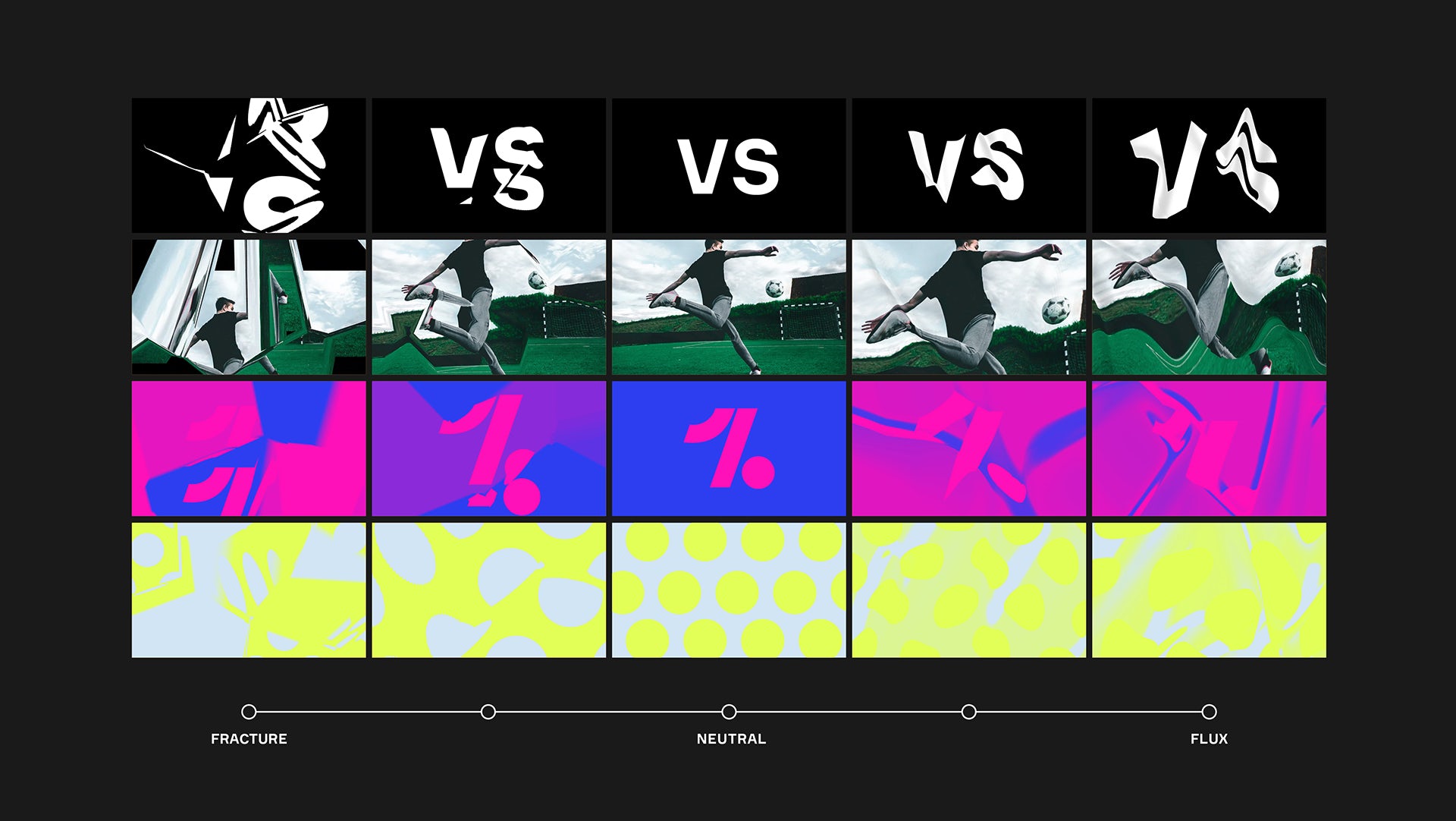 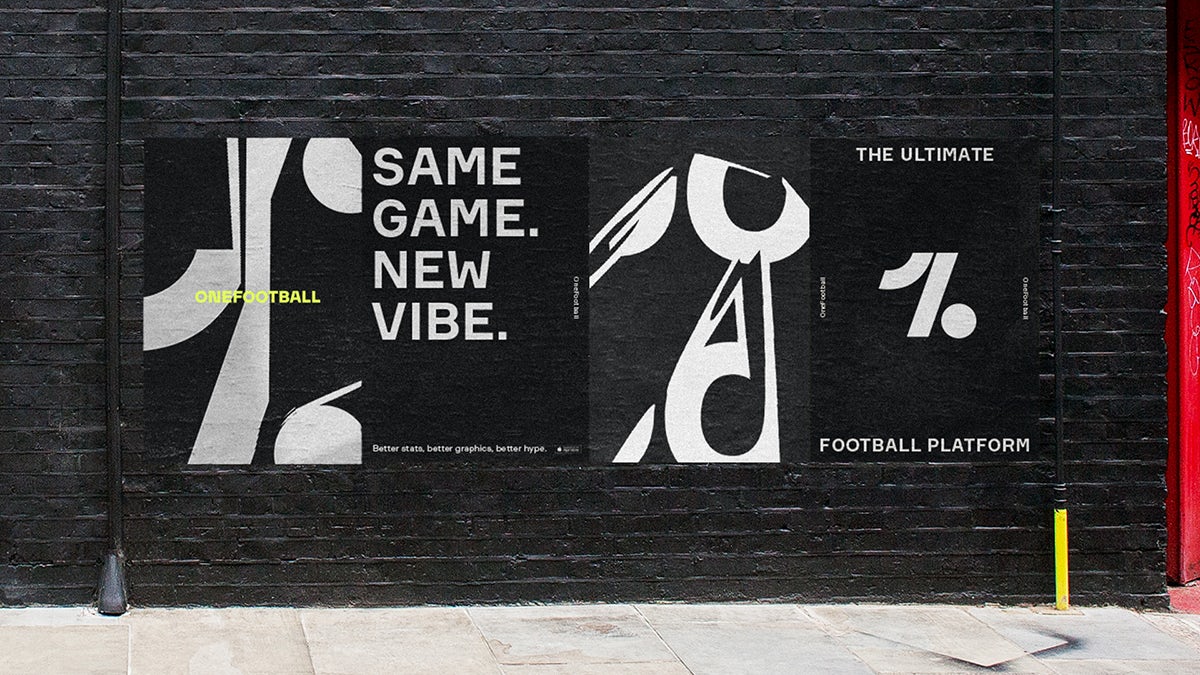