In the 1940s, Polaroid’s co-founder Edwin Land transformed photography with the launch of the instant film camera. His invention made photography more accessible – allowing anyone to instantly document events – and automated a complex process: thanks to the wonder of self-developing film, all consumers had to do was click a single button on their camera and watch images appear as if by magic.

It was this ease of use and simplicity that made instant film so popular – until digital cameras and smartphones came along and offered an even easier way to take pictures. After years of falling sales, Polaroid ceased production of instant film in 2008 and closed its last remaining film factory in the Netherlands.

That same year, New York collective The Impossible Project was founded with the intention of keeping instant film – and the Polaroid brand – alive. It took over Polaroid’s factory and began restoring vintage Polaroid cameras and producing instant film. In 2017, the company rebranded as Polaroid Originals, acquired the rights to the Polaroid brand name and launched the OneStep 2 – a homage to Polaroid’s hugely popular OneStep camera from the 1970s. 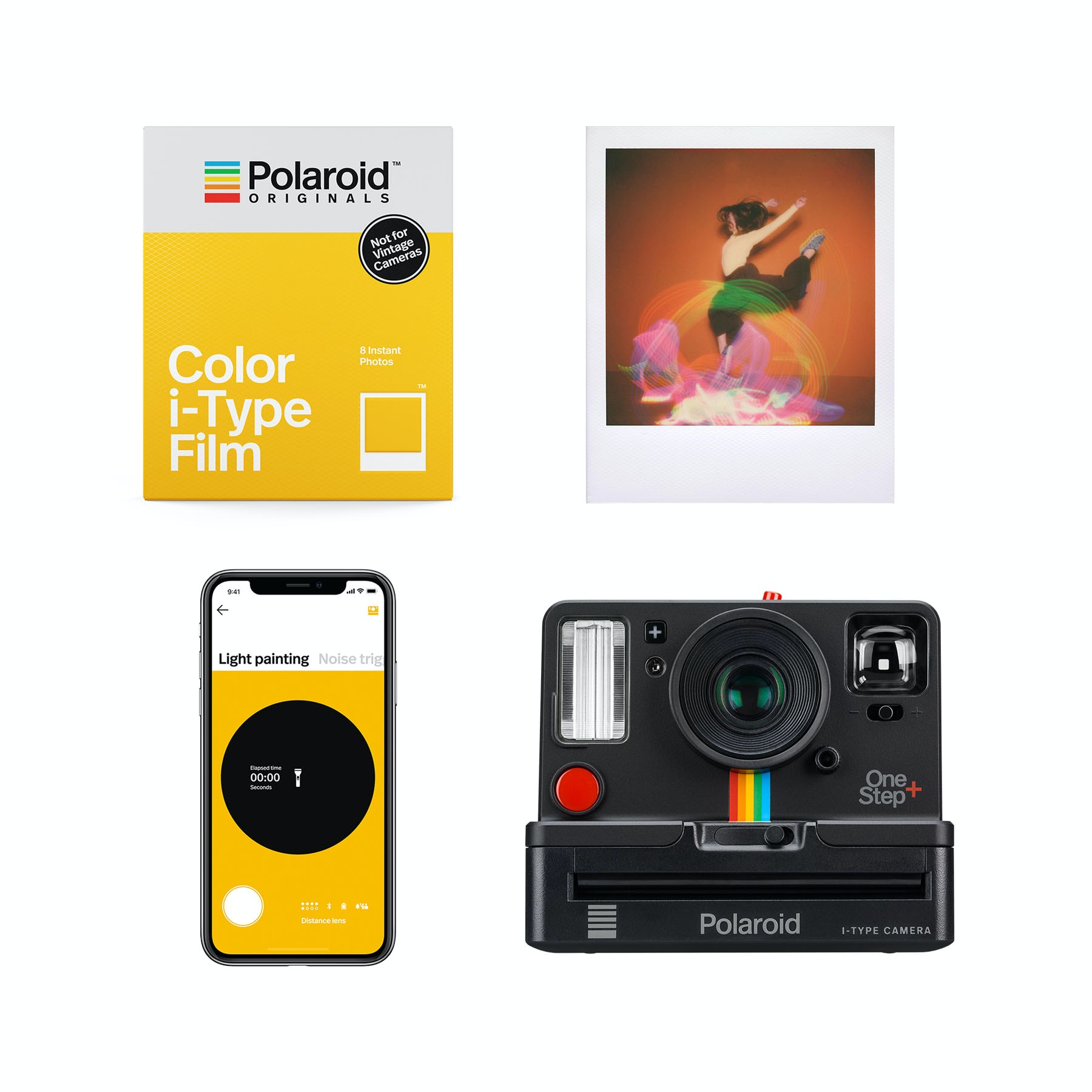 This week, Polaroid Originals revealed a new product, the OneStep+. The camera has the same simple design as the OneStep and OneStep 2, but comes with a range of new additions – from double exposure and light painting modes to a portrait lens allowing users to take more detailed close-ups.

The camera can be used on its own or connected to the OneStep+ app to access six new shooting modes. Double exposure mode lets you capture two images in a single frame, while the light painting feature creates long exposure photographs of moving light sources. There’s also a manual mode for controlling shutter speed, aperture and flash intensity, plus a 25-second timer, remote trigger and noise trigger functions.

The app encourages users to share their images on social media: a scanner feature identifies photographs, corrects glare, adjusts and crops images, removing the faff that usually comes with taking a decent picture of a Polaroid with your phone. Alongside this, an inspiration section will showcase creative collaborations with photographers (something Polaroid was once famous for) and advice to help users get the most out of their camera.

Polaroid Originals hopes the app will inspire users and help them understand the fundamentals of photography. Speaking to CR at the Polaroid Originals factory in Enschede earlier this year, CEO Oskar Smolokowski, who joined the brand six years ago, says he sees the OneStep+ as a device that will give people more control over taking pictures – something that has been lost with the arrival of smartphones.

“It’s about empowering people to do stuff,” he explains. “There’s this two-way communication thing going on, so we can explain to people something that’s not obvious to them…. 99% of people who shoot on an iPhone don’t know what happens when they change the aperture. Most people can guess what happens when they change the shutter speed, but the general mechanics of this stuff is not something that most people understand, [and] it’s a lot of fun when you learn to control your photos.”

Just as Nintendo Labo and Kano have done with physical computing, Polaroid Originals is hoping to inspire people through combining physical products with digital technology – and in the process, open their eyes to the creative potential of instant film (a medium that has inspired some of the world’s leading photographers from Wim Wenders to Ansel Adams).

Smolokowski believes this focus on creativity was lost in Polaroid’s final few years of producing instant film, but it’s something that Polaroid Originals wants to put back at the heart of its products.

“When you stop taking care of what happens after people buy the product, that’s the beginning of the end, and I think that’s what happened when Polaroid was getting out of [the instant photography business]. They were maximising profits, but not really thinking about interesting ways for people to use [instant cameras],” he says.

“The art programmes died down – they were very strong at the beginning, but they got shelved – and it became [more] about, ‘how do we make the cheapest camera? How do we sell the most units?’ It turned into this big machine, but we’ve kind of reset things from scratch. We started [making products] in really small numbers and have tried to build that back up again.”

He also hopes the app will allow Polaroid Originals to update the camera’s functionality over time and offer new features. “It’s not a here and now but we have some ideas on how to upgrade this with time, which is something I love – this idea that the product grows with its users.”

The OneStep+ allows people more manual control, but Smolokowski says this is intended to demystify the process of taking a picture, rather than making it more complicated.

The design of the OneStep+ – like the OneStep2 – is heavily influenced by classic Polaroid cameras from the 1960s and 70s (it looks almost identical to the One Step 2 and the original OneStep, but comes in black instead of white).

Polaroid’s focus on ease of use and simplicity – coupled with fun elements such as the rainbow stripe on its devices – was key to the success of its products, and paved the way for companies like Apple. (Steve Jobs allegedly counted Land among his biggest inspirations.) This approach to product design can also be seen in Polaroid Originals’ new devices, which are designed to appeal to anyone from photographers and tech enthusiasts to children who have never picked up a camera before.

“The big thing that Edwin Land brought to the table was this idea that products are for humans and not technology for technology’s sake,” explains Smolokowski. “He was always really focused on this idea that [you should be able to] pick up a product and figure out how to use it intuitively, before anyone else really cared about that stuff. So we’re trying to do the same thing here.”

“[Polaroid’s] products were all simple, they were all this one-button, one-step operation, and we try to have all of that infused in [Polaroid Originals’ products],” he adds. “We also came to this idea of playfulness – all these products really inspire this idea of play – so they’re just as fun for kids to use as they are for artists.”

Polaroid has always had a passionate user base – not just among professional photographers but amateurs who pinned pictures to their bedroom walls and filled albums with analogue selfies from parties, holidays and family get-togethers. That community never went away but now, Polaroid Originals is looking to inspire a new generation.

In the past three decades, the instant film camera has gone from a mainstream device to a niche, novelty product. People no longer need an instant camera – not when they can capture every minute of their lives on a smartphone – but by putting the focus back on fun and creativity, Polaroid Originals is hoping to create something that people want and something that will reignite people’s excitement around instant film. And if the success of the OneStep 2 (which quickly sold out on-pre order) is anything to go by, there’s still a healthy appetite for the medium.

The OneStep+ camera is available at polaroidoriginals.com and other retailers and is priced at £149.99. The Polaroid Originals App is free and available on Google Play and the App Store. Read our interview with Polaroid Originals’ Creative Director Danny Pemberton about the brand’s visual identity here.