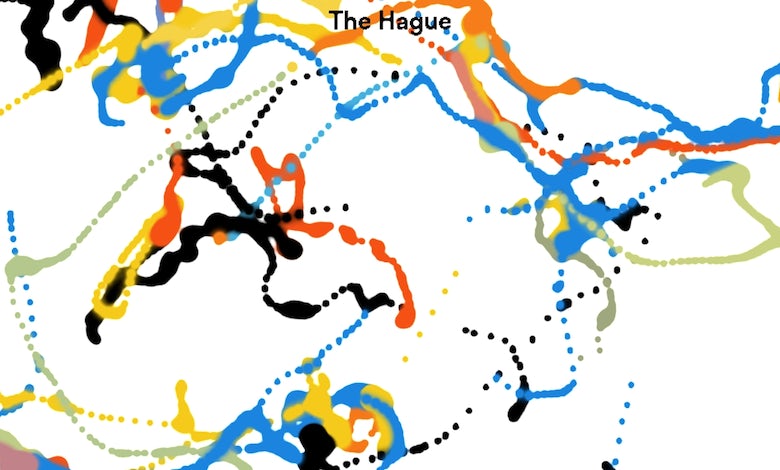 Designed as an enormous collaborative canvas, the web app tracks users’ location and movement, and uses the phone as a ‘paintbrush’ to turn that into brightly coloured dots and lines. The paintings reflect how fast someone is moving, with dotted lines representing speedy walkers and puddles of colour created when standing still.

Painted Earth works around the world and lets up to 200 people contribute to areas at once, with images created in real-time – meaning users of the site can watch artworks being formed. Once created, lines that have been added to the Painted Earth canvas are permanent.

“We spent way too much time finding a satisfying way to distribute ink on the canvas that works with thousands of lines synced over more than 100 devices on any given location on the earth,” explains Studio Moniker founder Roel Wouters. “We tried ‘marching squares’, ‘liquid simulation via feedback loops’ and ‘marching cubes’, but finally settled with ‘metaballs’ that we created by putting a threshold over a blurred gradient.”

Painted Earth is already displaying people’s inky traces – although at the time of writing London only had a single yellow dotted line drawn through it. Studio founder Roel Wouters says he hopes people will team up to create collaborative paintings around the world.

The online app marks the launch of Amsterdam’s Galileo Reference Center which monitors the EU’s network of Galileo navigation satellites.

“Normally the Galileo system is used as a service for wayfinding, monitoring the movements of tectonic plates and in medical instruments,” says Wouters. “We thought it would be interesting to see whether it also can be used as a tool for creation. It works by nature on a global scale.”

The project follows the Dutch tradition of spending some of a new building’s budget on an artwork – although usually these are tactile objects, rather than pieces of digital design.

“Just like the scientist who designed this infrastructure we can be tech optimists,” adds Wouters. “The commissioner of the Dutch State Architect, Gijs Frieling, who scouted us for this job saw a good fit. For us it was clear to make something social that works for everyone. The fact that it became digital only came as a result of that.”