Pentagram partner Paula Scher has teamed up with social activist and fashion designer Kenneth Cole on his new collaborative initiative, the Mental Health Coalition. The Coalition’s mission is to destigmatise mental health conditions, and address the ongoing public health crisis around mental health in the US, which has been compounded due to the Covid-19 pandemic.

“Cole wanted to take away the stigma of mental health conditions,” Scher tells CR on why she took on the project. “He equated it to the stigma that surrounded AIDS. I thought he was right and it was a great cause.” Scher’s identity centres around an icon that represents the idea of a ‘square peg in a round hole’, a common symbol of not belonging, and a feeling that manifests itself in various ways for millions of people globally.

“Cole’s hope was that everyone sometimes has emotional issues and that everyone needs to be able to feel like it’s OK to feel that way and to talk about it and get help if they need it,” Scher explains. “I equated that feeling of not being emotionally stable to feeling like a square peg in a round hole. I wanted to create a symbol and system that could be universally recognised and take away the sanitarium aspect of mental health.”

The icon illustrates that there is no ‘normal’ when it comes to mental health and that everyone fits despite how it might feel. Set in the typeface Druk by Commercial Type, the chunky black letterforms are set against a rainbow of colours, which has been applied to business cards, stationery, the website and a set of posters which feature powerful phrases. 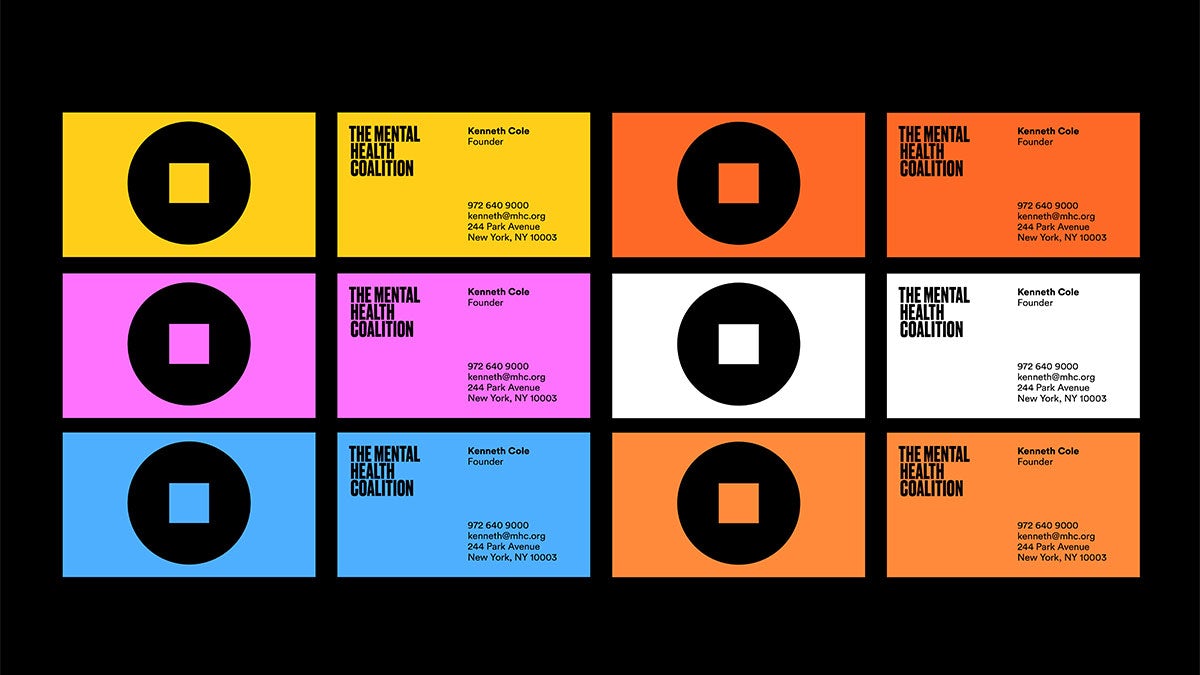 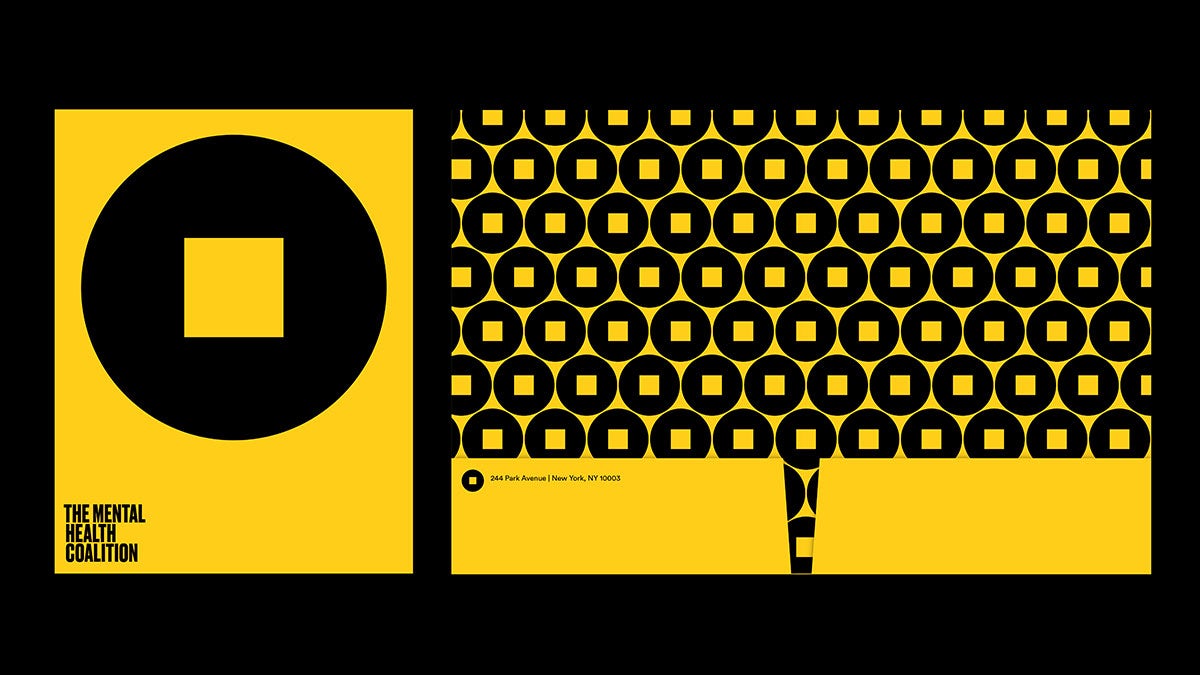 The simple mark is also applied to the branding Pentagram has created for a digital storytelling platform that forms part of the Coalition titled, How Are You, Really? The platform aims to be a space for those seeking help and guidance around mental health, while also encouraging individuals to share their experiences and stories, and to start conversations about their issues. Here visitors will also find the voices of celebrities, influencers and advocates discussing mental health in an “open, authentic and provocative way”.

The Druk typeface is used again here to signal its connection to the Coalition. Likewise a bright but slightly more varied colour palette has been applied to represent the broad spectrum of mental health conditions, while also capturing a sense of optimism and hope. 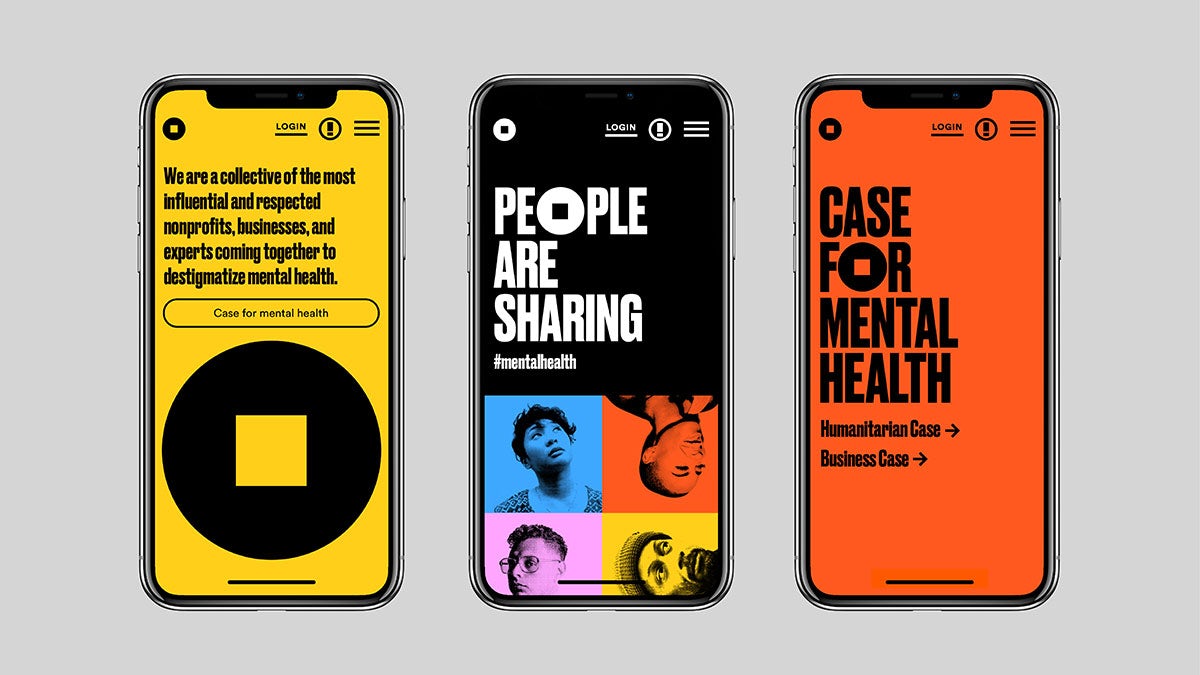 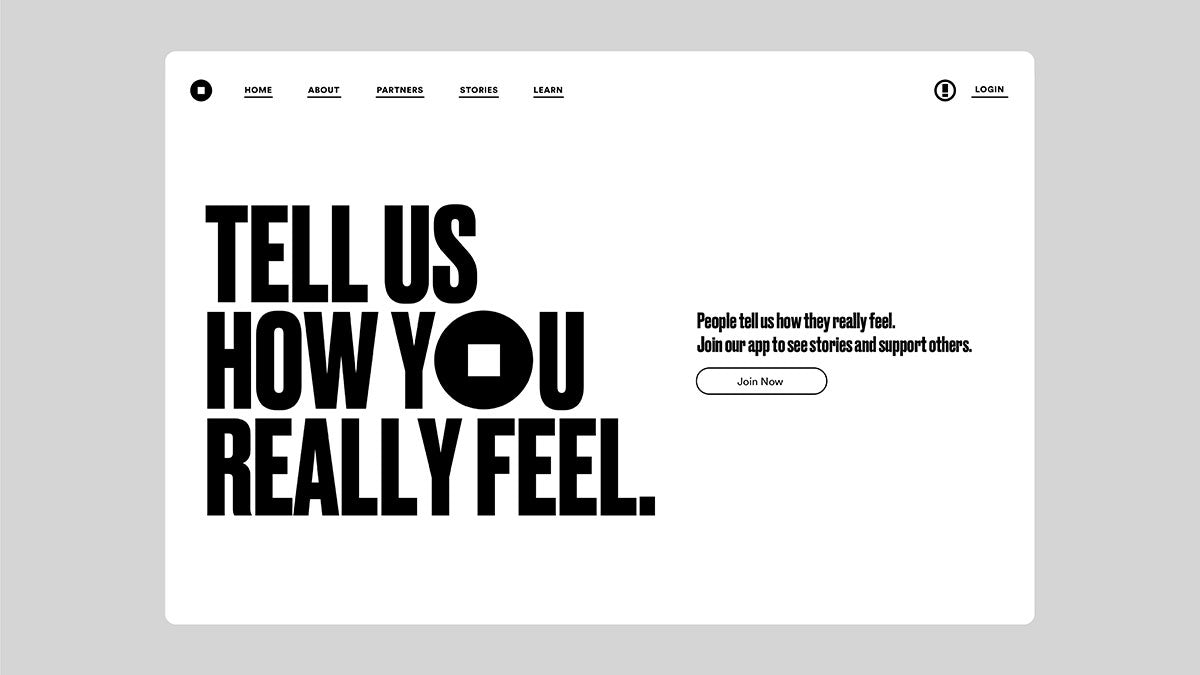 “I like the way that Pentagram captured the How Are You, Really? identity, as distinct from but still cohesive with the Mental Health Coalition,” says Cole. “The platform’s identity is appropriately muted and calm, as it will be a hub for often serious discussion, but it is also interwoven with pops of colour and fun to lighten the mood and increase engagement.”

For Scher, she felt it was her and her team’s responsibility to create an engaging but safe space. “I think the graphics have to be powerful and accessible, not timid or sedate, and allow people to feel like it’s OK to come into the site and participate,” she says. 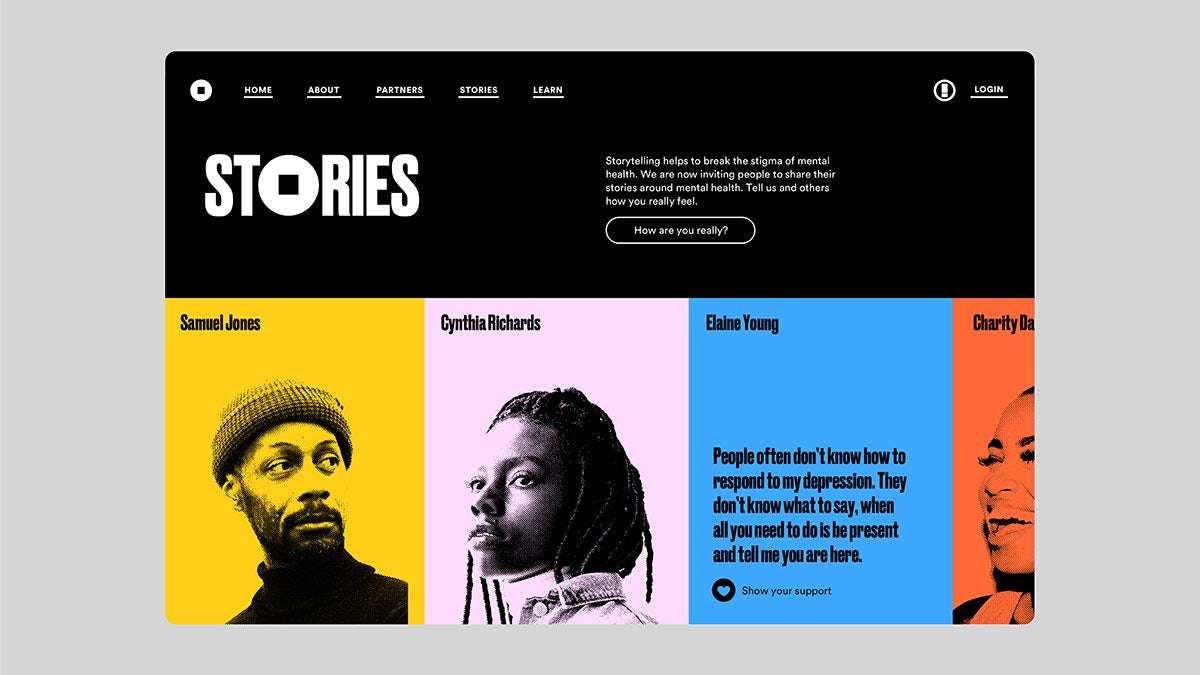 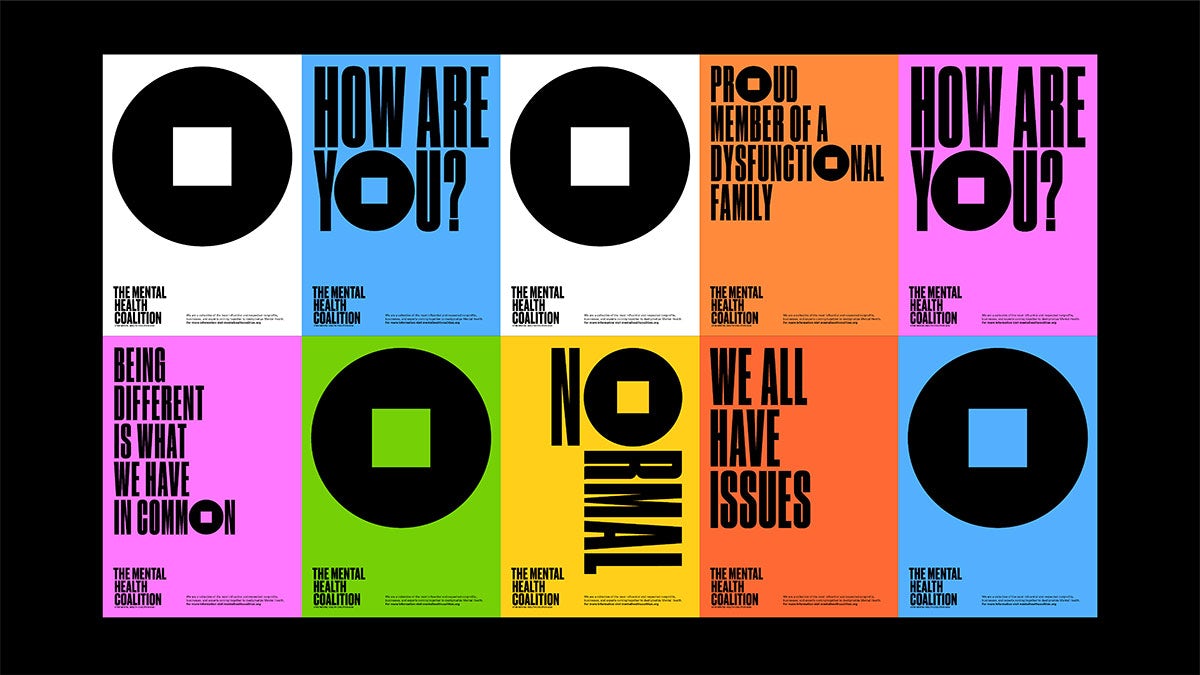 Cole adds: “We wanted to create a platform where our users feel safe to connect and be vulnerable. Pentagram understood our vision from the start and ultimately created an engaging and welcoming aesthetic for How Are You, Really? which we know will encourage users to share authentically – helping us toward our goal of destigmatisation.”

According to the World Health Organization, one in four people will experience a mental health condition at some point in their lives, and with the impact of lockdown being felt by many, it seems more important than ever that initiatives like this exist and offer support.

The Mental Health Coalition’s platform How Are You, Really? is set to launch this month for Mental Health Awareness Month and will be accompanied by the #howareyoureallychallenge on social media, which will ask people to share how they are feeling and then nominate friends to do the same. 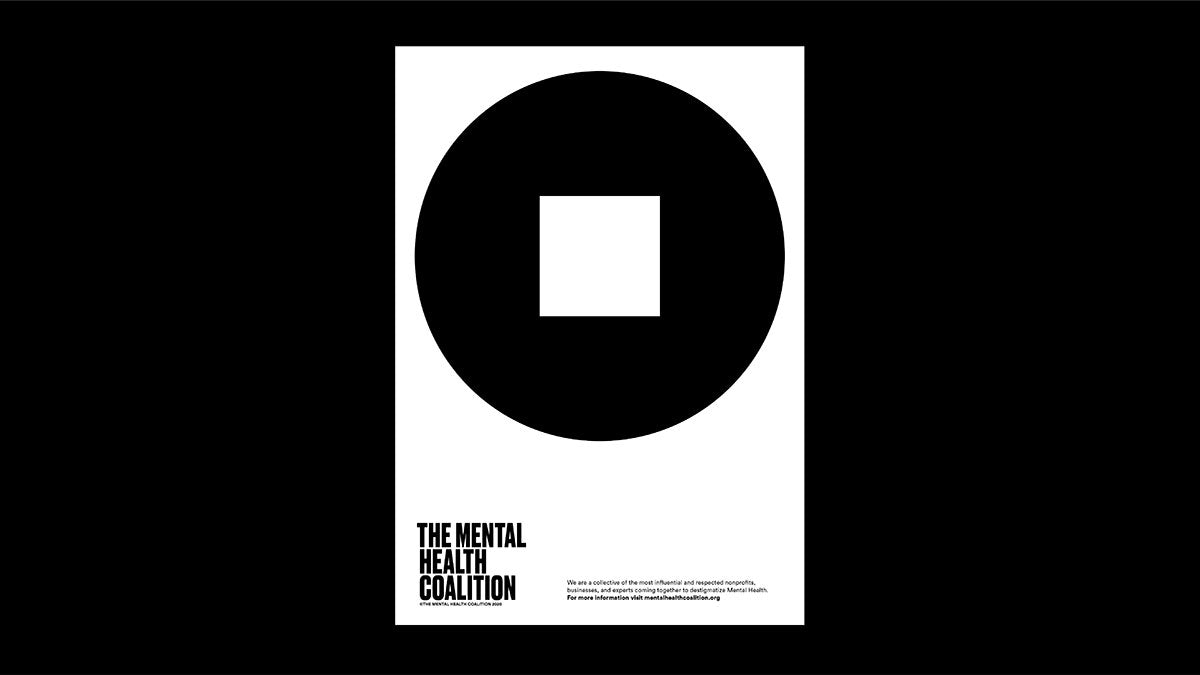