The more strait-laced (and legal) cousin of graffiti, supergraphics have long represented an effective method of communicating to the masses in a way that can transcend traditional posters or billboards. First rising to prominence in the 1970s, large-scale designs have been transforming public spaces for decades, taking the form of decorative murals, wayfinding signals and branding symbols.

Given their transformative, creative potential, supergraphics seemed like a fitting way to celebrate the addition of plant life along the stony façade of the Hammersmith Flyover in West London. The initiative, led by Hammersmith & Fulham Borough Council, comprises a combination of planters and an ivy barricade, which help to reduce the impact of harmful emissions and improve the air quality underneath the flyover. To mark the completion of the work, the council enlisted Fieldwork Facility to find a creative way of highlighting the positive difference that plants can make towards pollution.

During the research phase of the project, Fieldwork Facility unearthed stories about Hammersmith’s horticultural heritage, as well as its overlapping ties with notable historic figures in the design community. The resulting motif, painted by Peter Barber, paid homage to polymath William Morris, best known for his textile designs during the 19th century – his trademark aesthetic inspiring the leafy designs that adorn the concrete flyover. “Pulling on this horticultural thread a little, we discovered William Morris wrote about Hammersmith in News from Nowhere, a utopian novel about pastoral paradise,” explains Robin Howie, who runs Fieldwork Facility. “We quickly discovered Morris lived within a mile of the project site and so we thought it would be appropriate to try adapting his famous designs to inform the project.” 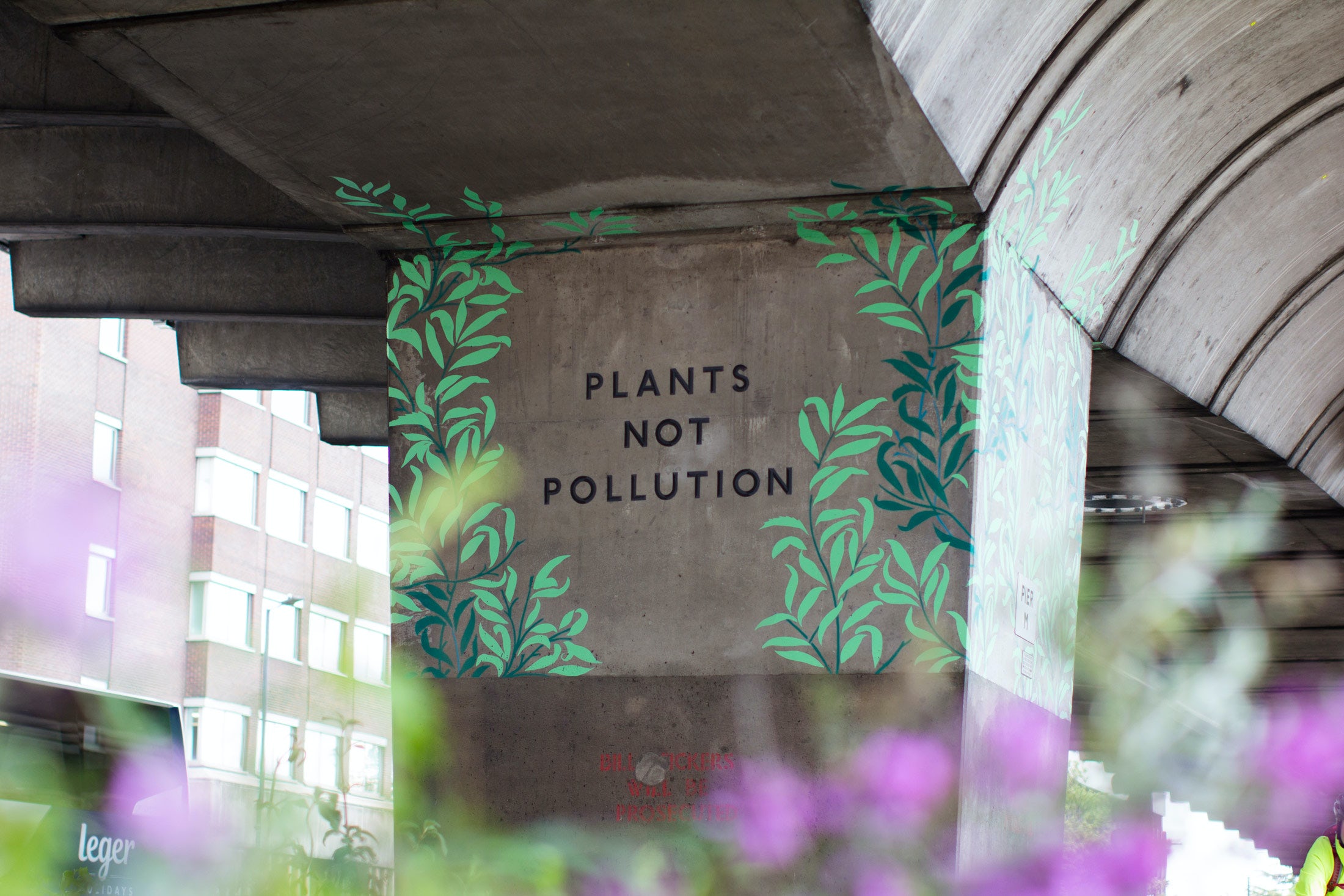 At the centre of the mural was the slogan ‘Plants not Pollution’, painted in a style influenced by that of Edward Johnston, who famously created the typeface used across London’s tube signs. “We also found out that Edward Johnston lived just a short walk away too, with the tube literally running under the site,” continues Howie, adding that the supergraphics can be seen from the Piccadilly Line. “It just felt right so we incorporated Johnston’s eponymous typeface for the headline.”

The project evolved from its initial starting point, ‘Plants Eat Pollution’, which “would have looked much the same, but instead of paint we would have used stencils and high pressure water jets”, Howie says. “So the Willow Bough pattern would literally have eaten away the build up of pollution across the flyover and surrounding pavements.” However, they switched the concept to paint so as to make it more permanent.

This isn’t Fieldwork Facility’s first foray into environmental causes and social responsibility, with previous endeavours including branding for a Low Carbon Hub in Oxfordshire, as well as work for The Nest Project, which aims to encourage bird life in inner-city areas. However, though these themes are by no means a prerequisite for working on a project, Howie believes that, for Fieldwork Facility, “it’s our ethics that guide us to have a positive impact on our work,” adding that “social responsibility is ever-present through all of this…. It’s just how we think and do business.” 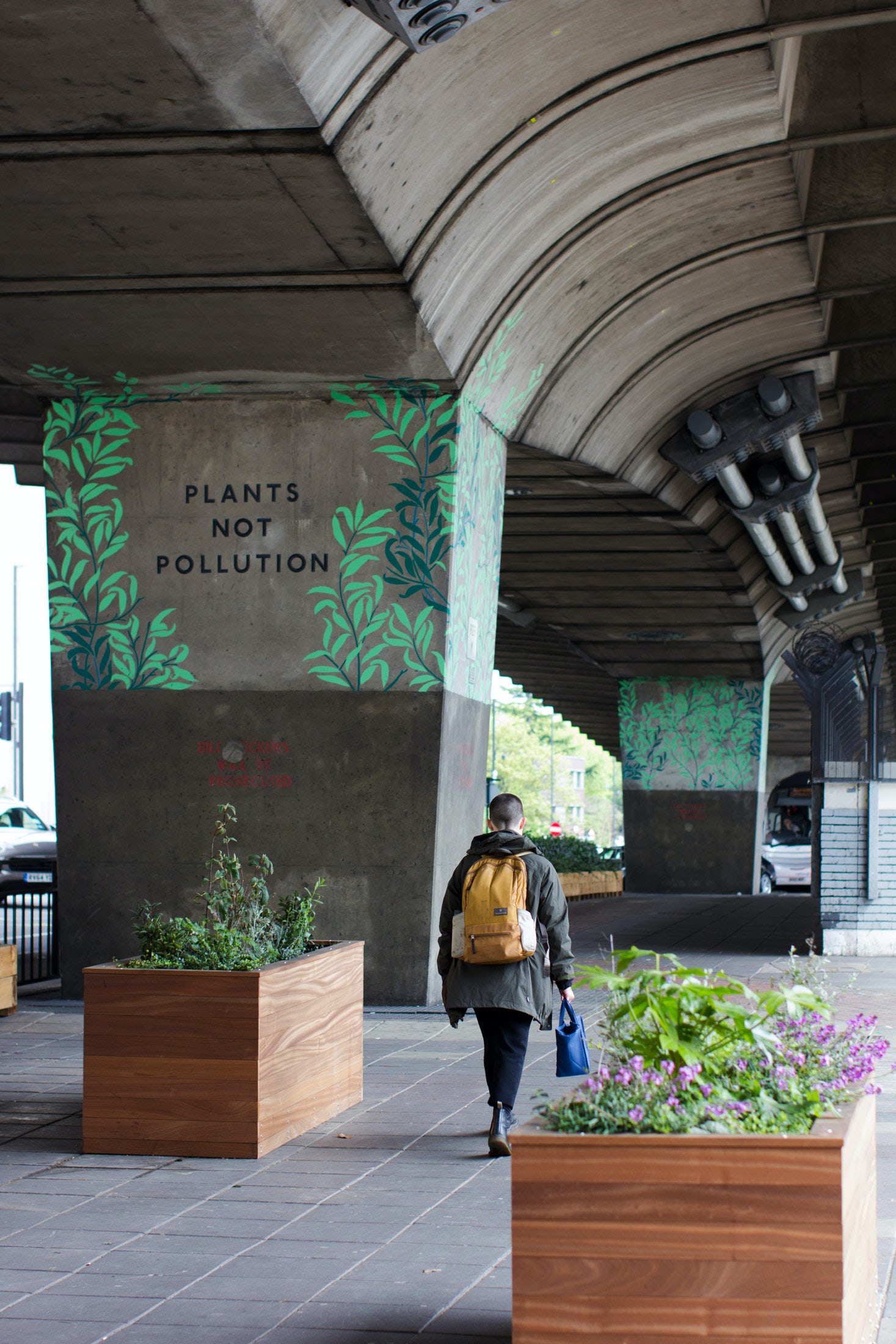