As the coronavirus pandemic continues to play havoc with our lives, arts organisations, which rely on a steady footfall of visitors to live events and exhibitions, have particularly struggled. While some venues are allowing in visitors in limited numbers for safety, others have had to cancel exhibitions and performances entirely.

Inevitably, we have also begun to see museums and arts spaces experiment with the possibility of hosting exhibitions online instead, and this week sees two well-established annual art events – the Royal Academy in London’s Summer Exhibition and Bloomberg New Contemporaries – go digital.

The two organisations have taken varying approaches in presenting the work to the public. The Royal Academy has partnered with WeTransfer to showcase the Summer Exhibition, in a collaboration that was conceived by Uncommon Creative Studio and is a first for both parties. 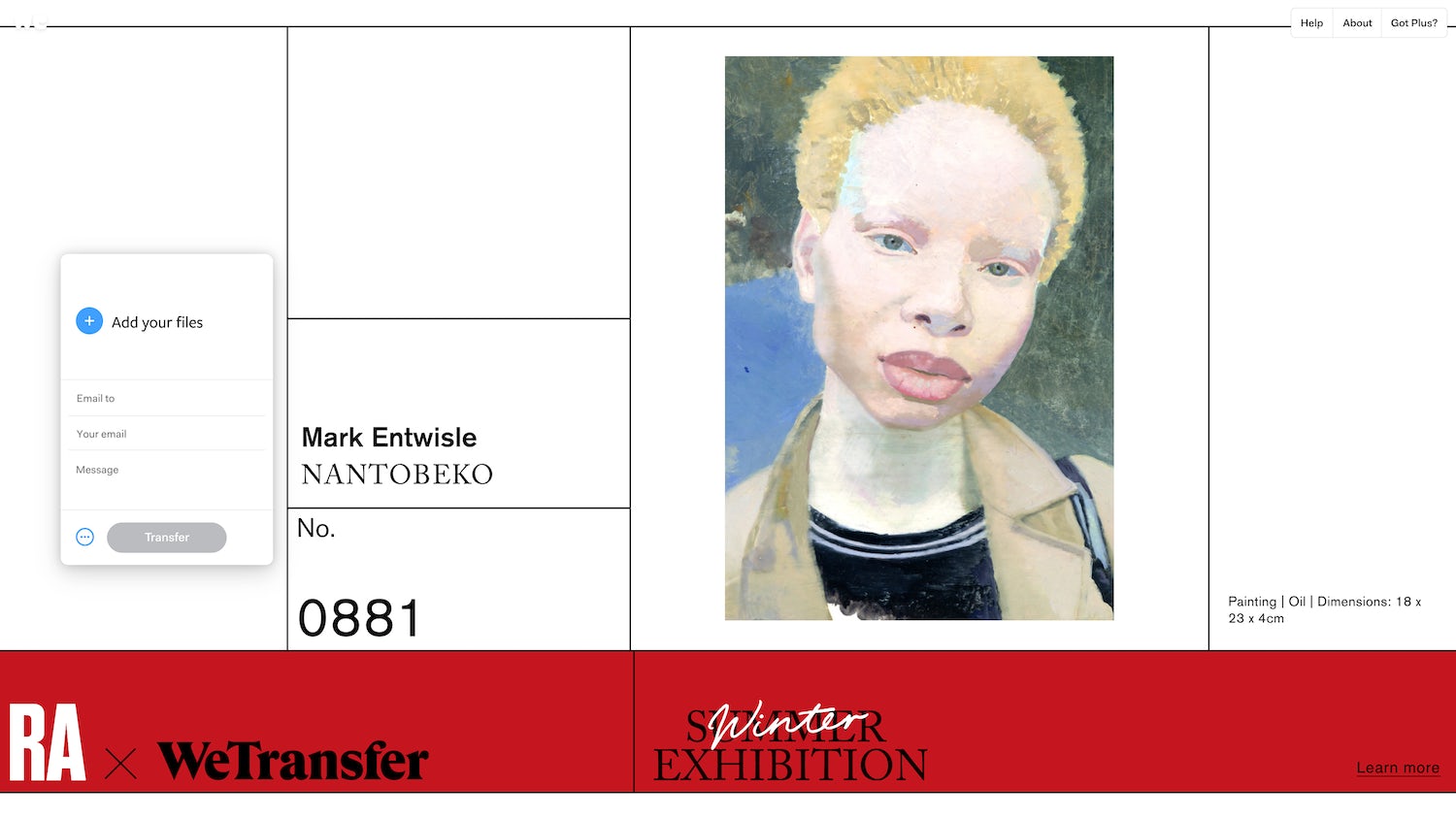 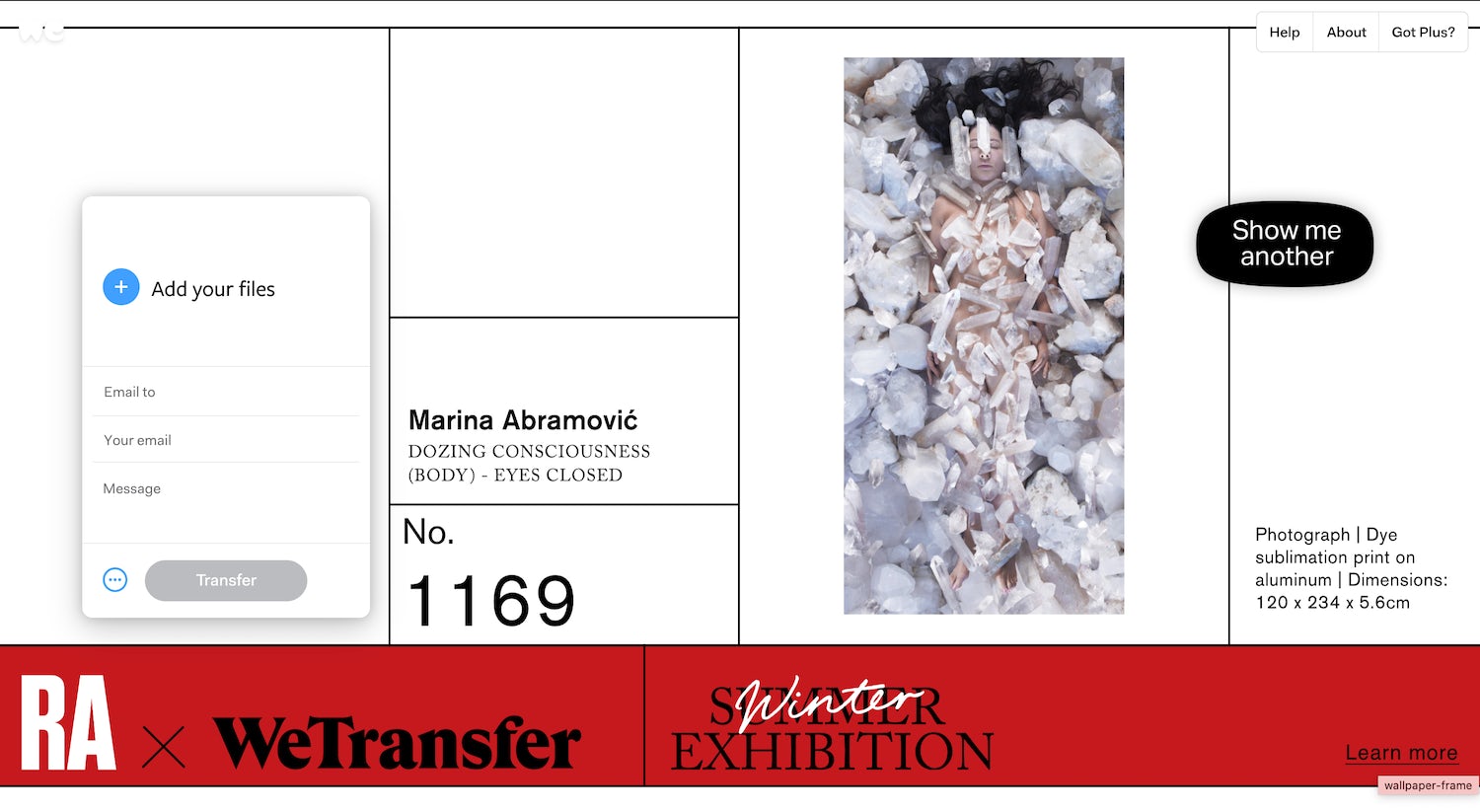 The co-ordinators of this year’s Summer Exhibition, Jane and Louise Wilson, along with the Summer Exhibition Committee of Royal Academicians, selected work this year from over 18,000 submissions. They settled on a final group of 1,172 pieces, which are featured in the Royal Academy itself and also available via WeTransfer’s fullscreen background images (the ‘wallpapers’ which appear when you are sending files via the site).

The artworks will appear on WeTransfer in a ‘lucky dip’ format, with new artworks appearing each time you click on the wallpaper. WePresent, the editorial arm of WeTransfer, will also spotlight commentary from curators so viewers can learn more about the artists, themes, and ideas behind each piece of work — in the hope of creating an experience that’s analogous to a guided tour. 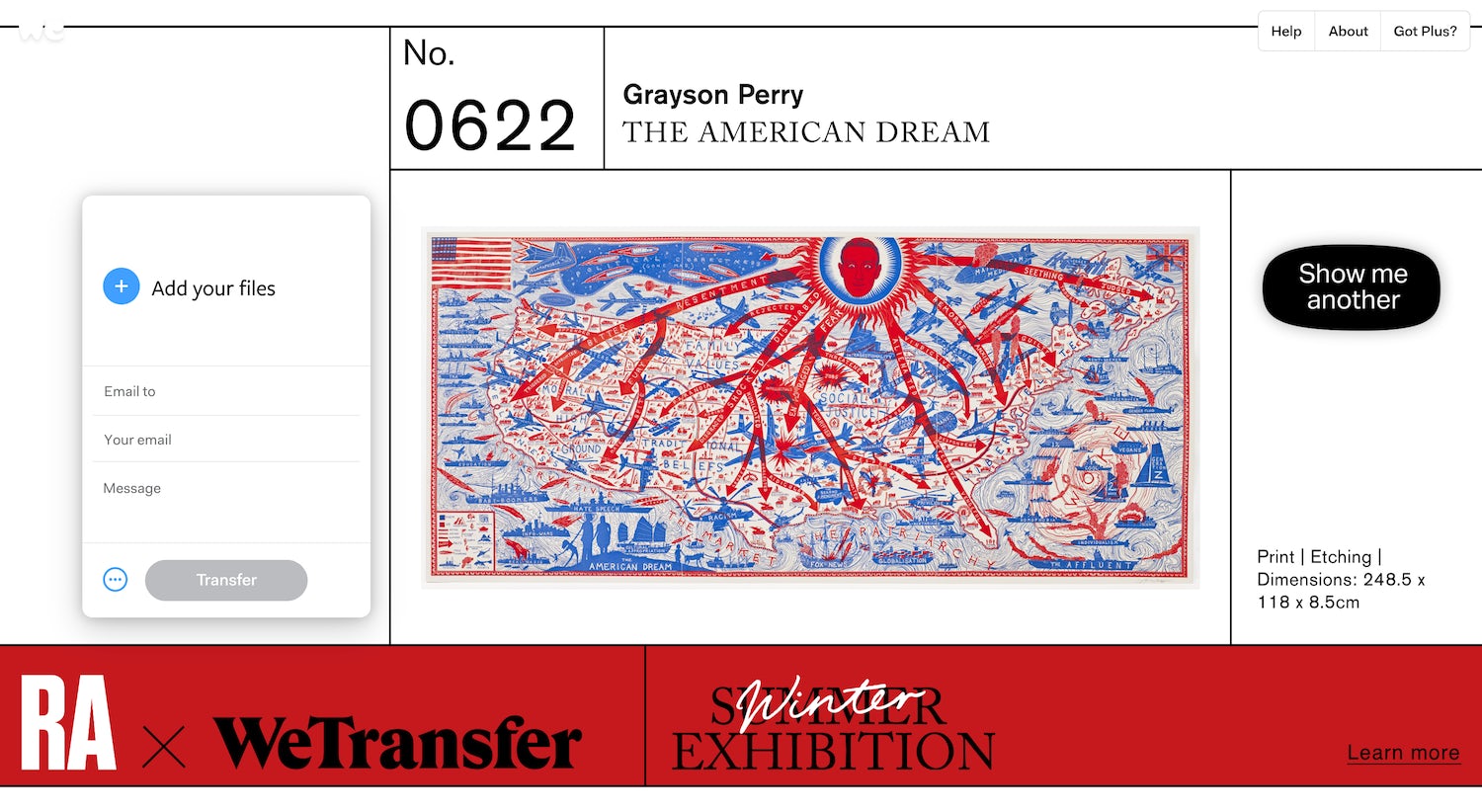 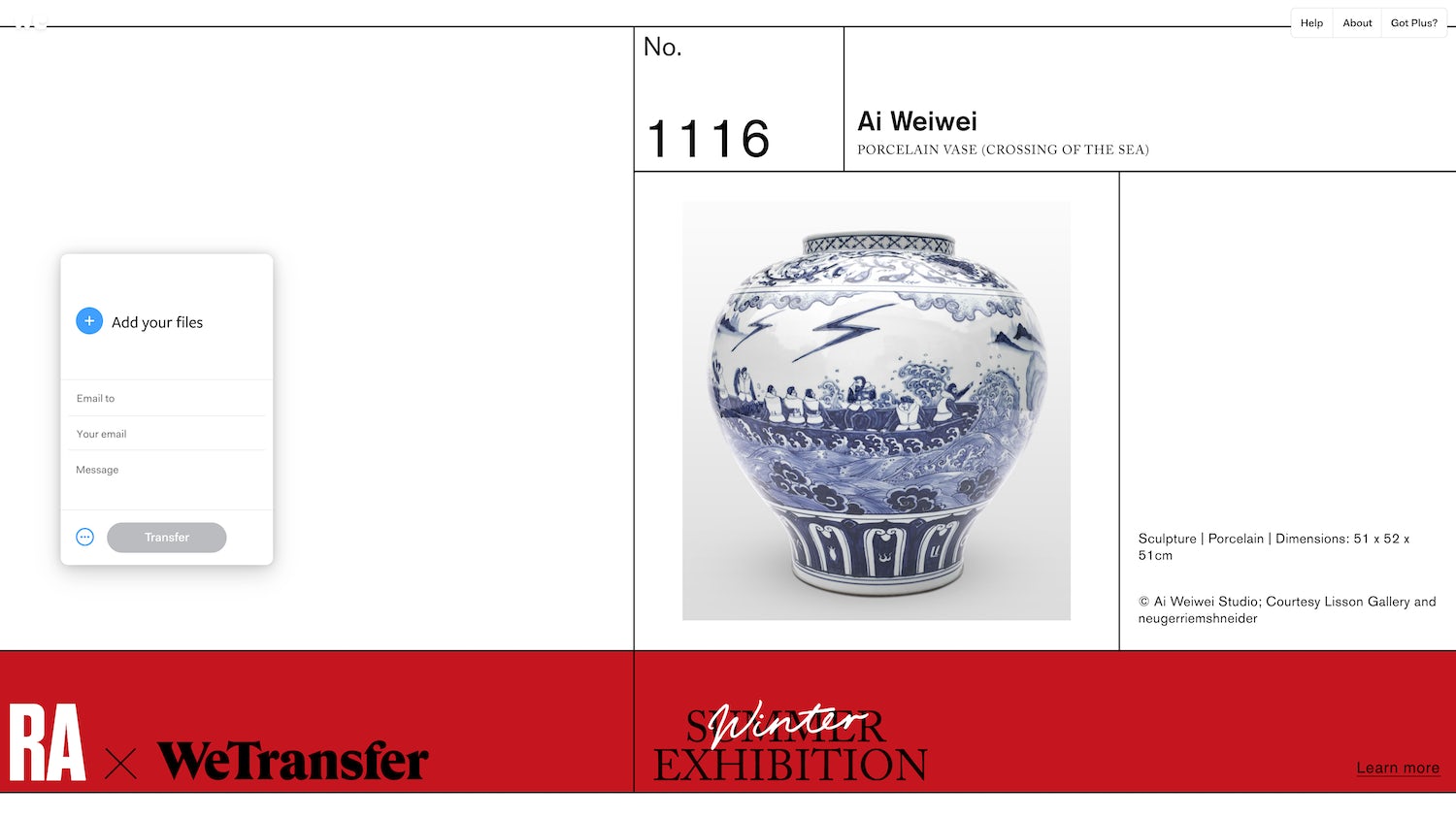 Both the ‘live’ version of the Summer Exhibition at the Royal Academy (which requires pre-booked tickets and is on until January 3) and the WeTransfer version open this week, having been postponed from earlier in summer due to the pandemic. The hope is that the digital version will allow the show to reach a larger audience than ever before.

“The Summer Exhibition has taken place every year since 1769, even throughout the war years, and is embedded in UK culture, supporting the artistic community and art education,” says Edith Devaney, head of summer exhibitions and contemporary curator, Royal Academy of Arts.

“This open, inclusive and democratic show gives our visitors a much-anticipated display of creativity and joy. We are delighted to have WeTransfer as our digital partner this year. As some of our visitors may not be able to visit in person, due to Covid-19, this partnership will enable us to enhance the reach of the Summer Exhibition globally so that everybody can experience contemporary art made now.” 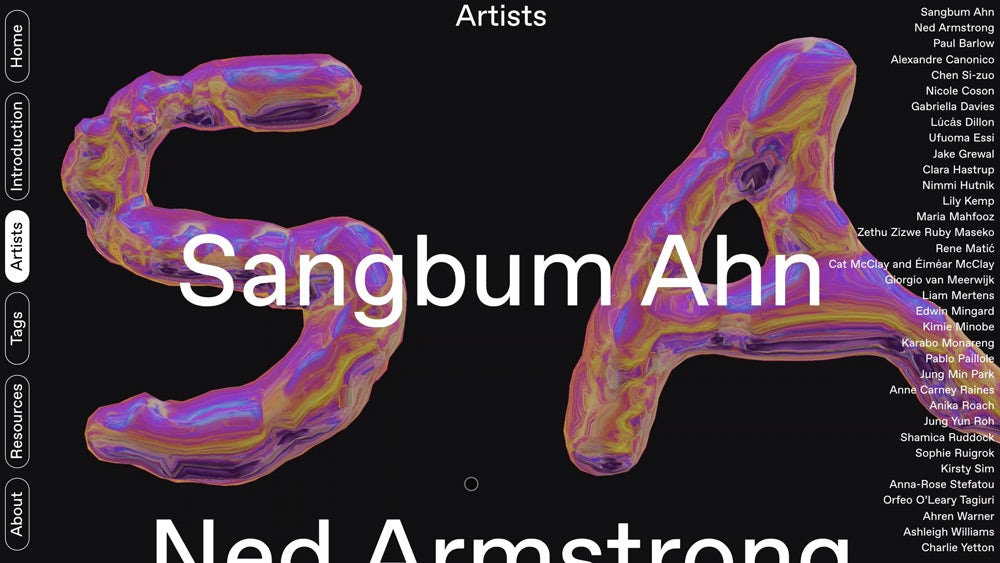 In contrast to the RA show, Bloomberg New Contemporaries has taken a more traditional approach to an online exhibition, by creating a bespoke website to showcase the work of the artists picked this year. In typical years, BNC is a touring show and it was scheduled to launch at Humber Street Gallery and Ferens Art Gallery in Hull in September. But in June, the organisers took the decision to launch digitally instead, with the first real-life exhibition of the work to take place at the South London Gallery in December.

The design for the website, created by Hato, was influenced by the times we’re in, and draws heavily on the theme of ‘bubbles’. Each of the 36 artists picked this year have their own section on the site, featuring imagery, videos and texts about the work, plus they all worked together with Hato to create the bubble-like identity.

The basis of the identity was built on a web-app that facilitated the 36 participating artists to engage in co-designing the identity in real time. Using a simple painting gesture the app allowed each artist to fill and occupy their own digital bubble in sync with the other members of the collective. “The animated metaball ‘bubbles’ geometry was manipulated through the action of subtracting and adding matter with each stroke,” say Hato. “The 3D bubbles were programmed to move and mimic the actual physics of a soap bubble, each letter form comprising 200 metaballs that, when combined with the artist’s manipulations, resulted in the final bubbly letter structures.” 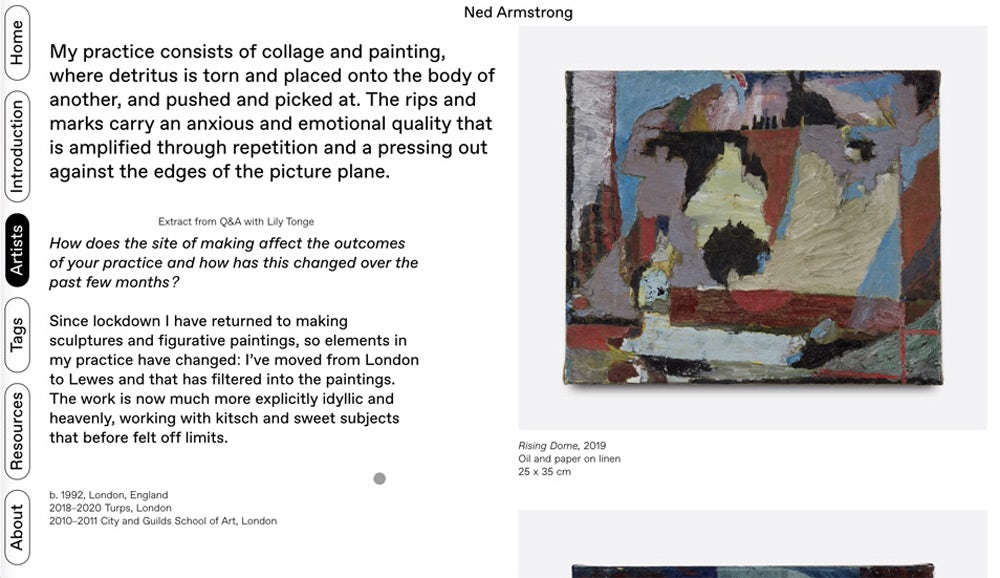 “Hato’s design concept has helped us build a collective space, virtually, with the bubble font identity that is used throughout acting as a motif and a metaphor for connectivity and community, as well as being a tangible result of the artists working together by using an online tool to create the letterforms collaboratively,” says Kirsty Ogg, director New Contemporaries, in an introduction to the online exhibition.

Ogg also points out that while the pandemic has been immensely challenging for arts organisations, it has opened up new ways of thinking. “Throughout our history, we have remained responsive to the ever-changing needs of artists and a constantly evolving sector,” she says. “At this moment of change, it feels doubly important that we remain attentive to artists’ needs and the conditions of how their works are made public when working online and IRL.

“The digital space has opened up conversations around access, global reach and engagements from a range of perspectives, and where this platform initially launched as an alternative way of presenting this year’s cohort, in subsequent years we will continue to test how we address these critical concerns. I have been truly heartened by the enthusiasm of those that have joined us on this journey.”