Heineken Refreshes the Parts Other Beers Cannot Reach’ was written by Terry Lovelock in 1973, when he was a copywriter at the Collett Dickenson Pearce ad agency. It was a golden time in British advertising, and CDP was at its peak: led by Frank Lowe the agency set a benchmark for creativity in ads. Despite this, the gestation period for the Heineken line was a painful one. “The Heineken thing was the nearest I ever came to suicide,” says Lovelock now. “Normally you get a brief that’s a few pages of information, but on this occasion all we got was a piece of yellow card that said ‘refreshment’. That’s what they wanted to convey: refreshment…. After about six weeks, I was ready to chuck myself out the window, because I couldn’t think of anything original enough to say.” 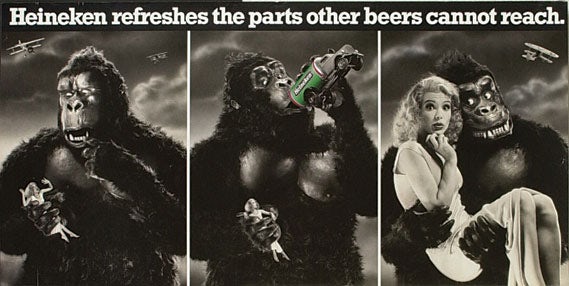 Lovelock headed to Marrakech in Morocco for inspiration, on the back of a Ford shoot that was taking place there. The line came to him at 3am one night and he wrote two scripts based on it. Lowe’s response was typically restrained. “I took the scripts back to Frank and his words were ‘oh, they’ll buy this’,” says Lovelock. “I thought that’s about as positive a reaction as you’ll get. And they did – he sold it.”

As with so many of the slogans on our list, the expression is now part of everyday speech, despite the fact that Heineken stopped using it in the late-90s. It even received royal approval in the early 1990s, when Prince Charles pronounced in a book on watercolours that “painting transports me into another dimension which, quite literally, refreshes parts of the soul which other activities can’t reach”. Advertising accolades rarely come higher.