When architecture studio Unknown Works was tasked with creating a quintessentially British fish-and-chip shop in China’s Chengdu, it knew it would need more than just Union flags and bulldogs. “There are some very stereotypical British tropes, veering on the kitsch,” directors Theo Games Petrohilos and Ben Hayes told CR. “So the idea came into our heads of literally transporting fish-and-chip shops, including their fascias and idiosyncrasies, over to China.”

In what must have been the most enjoyable research project of their careers, the team spent months touring chippies around the country. Using photogrammetry – taking a series of hundreds of photos around a particular object – they were able to document tiny details from each shop, such as tiles, plaster mouldings, wallpaper and even the fabric grain on aprons. They also used LiDAR scanning, which involves a machine on a tripod spinning a laser, to capture entire rooms in detail. 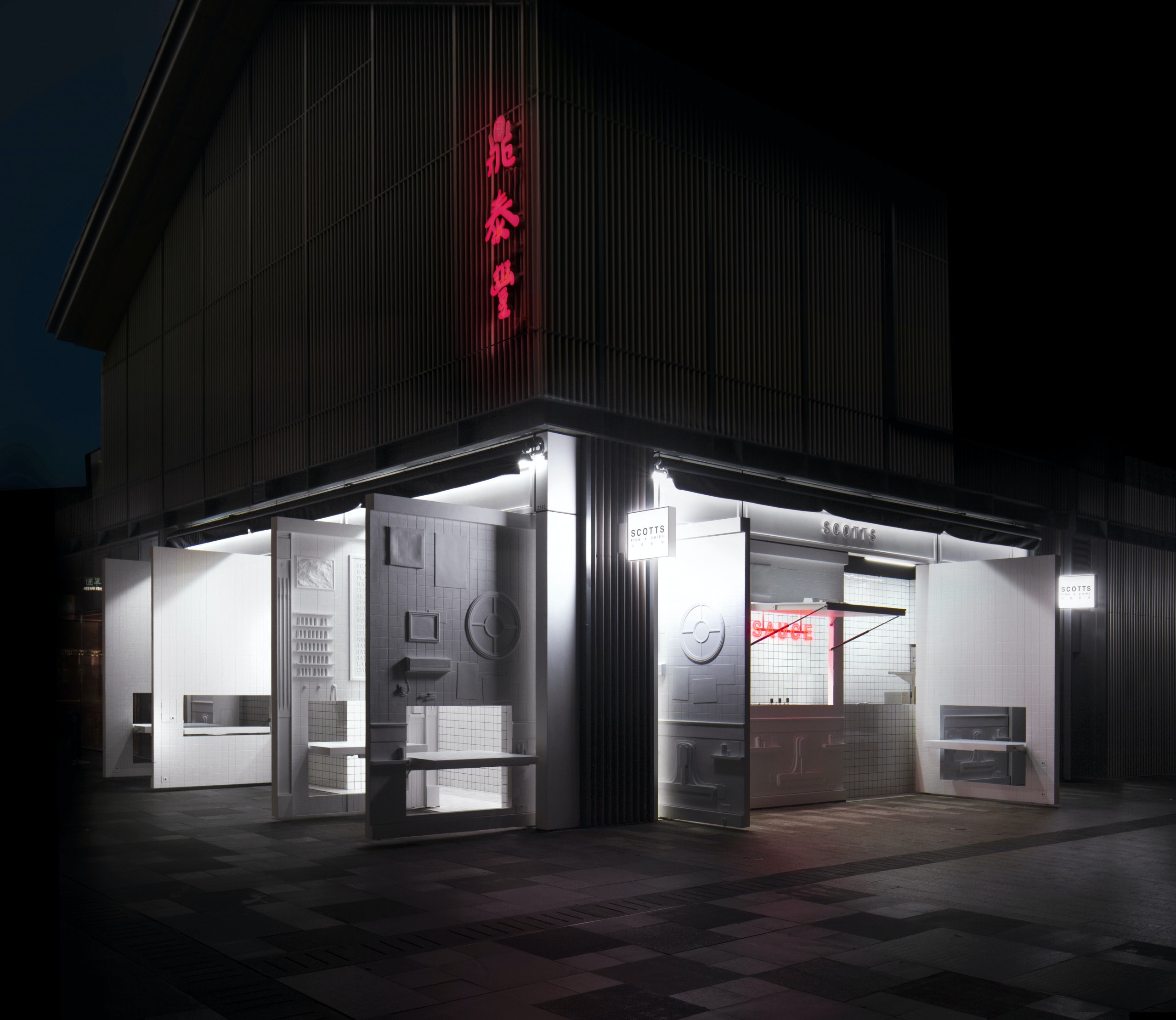 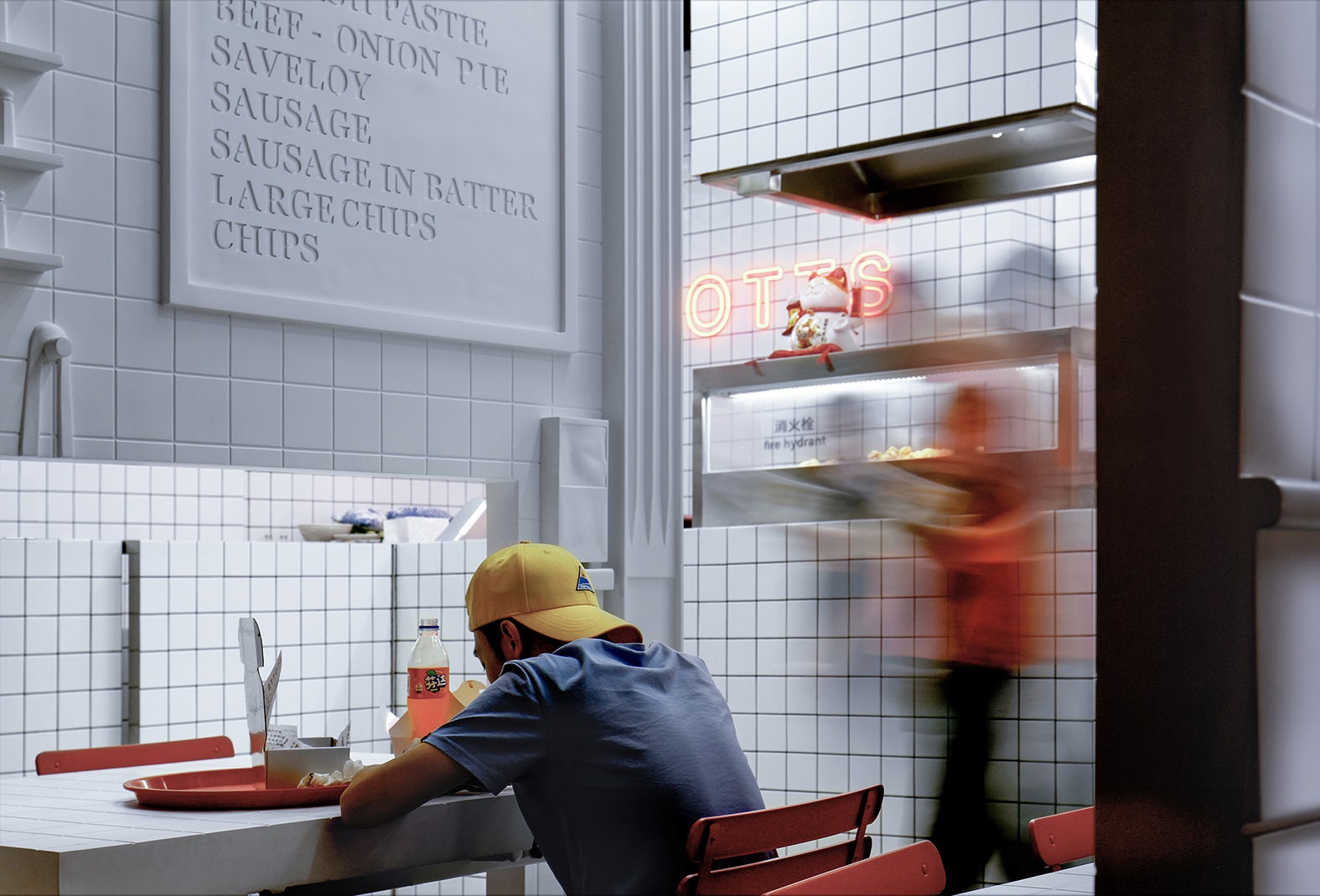 At the end of it – and after a lot of free portions of cod and chips – they’d built up a library of objects, surfaces and architectural fragments from the shops. Taking elements from this, Unknown Works designed a foldable façade for Scotts Chengdu, which is dotted with details most British people will recognise. There is, of course, the white tiles that are de rigueur for any chippie worth its salt, but there are also folded aprons, wall menus, decorative bits of plaster, and salt and pepper pots, all embossed onto the surface.

To create the exterior, Unknown Works had to find a fabricator that could recreate each part in faithful detail. In the end they chose a company that makes characters for Disney theme parks, which was able to produce huge panels of glass-reinforced plastic that repli-cated all the minute elements from the design team’s original scans. “We wanted to literally copy those elements and take them to China, as a play on ideas of China copying certain things,” the pair explains. “But it’s also this cultural exchange from Britain and China.” 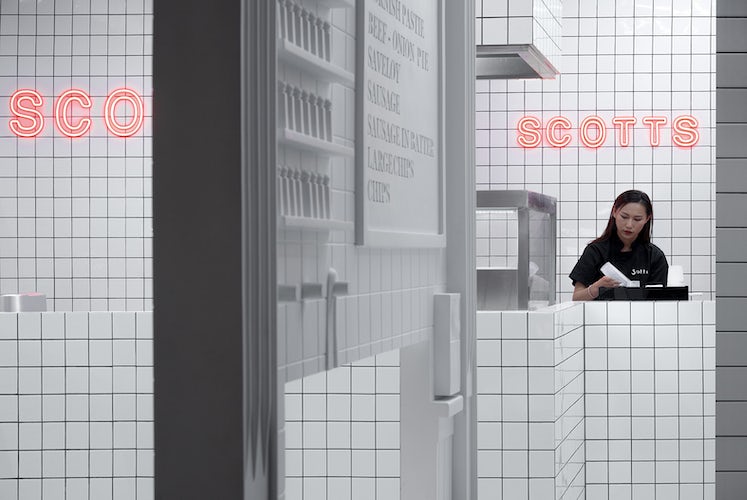 The fold-out doors perform an important practical role as well, adding outdoor space to the shop, which is squeezed into a 33-sqm space. Portals between the panels allow diners to converse and, according to the pair, have given rise to some interesting encounters – for example, the local monks, in full orange regalia, chatting with teenagers. The panels do shut at night, when the store converts into a hole-in-the-wall for takeaway orders.

Unknown Works say Scotts Chengdu has been popular so far, which is no surprise, considering Chinese tourists flock to the original Scotts in Yorkshire, following President Xi –Jinping’s trip there in 2015. What is perhaps unexpected is how popular the space has been as the backdrop for art events and fashion shoots. “We wanted it to operate as an international outpost,” say Games Petrohilos and Hayes. “Some sort of exchange or discussion about food, British commerce and traditions, but also relating to different industries. So, it’s a nice, odd mix between fish and chips and fashion and shoe labels and the British consulate.”

Apparently, Chengdu has even put its own twist on British tradition, introducing a Szechuan ketchup that’s flying off the shelves. According to Unknown Works, the mushy peas haven’t quite taken off yet. 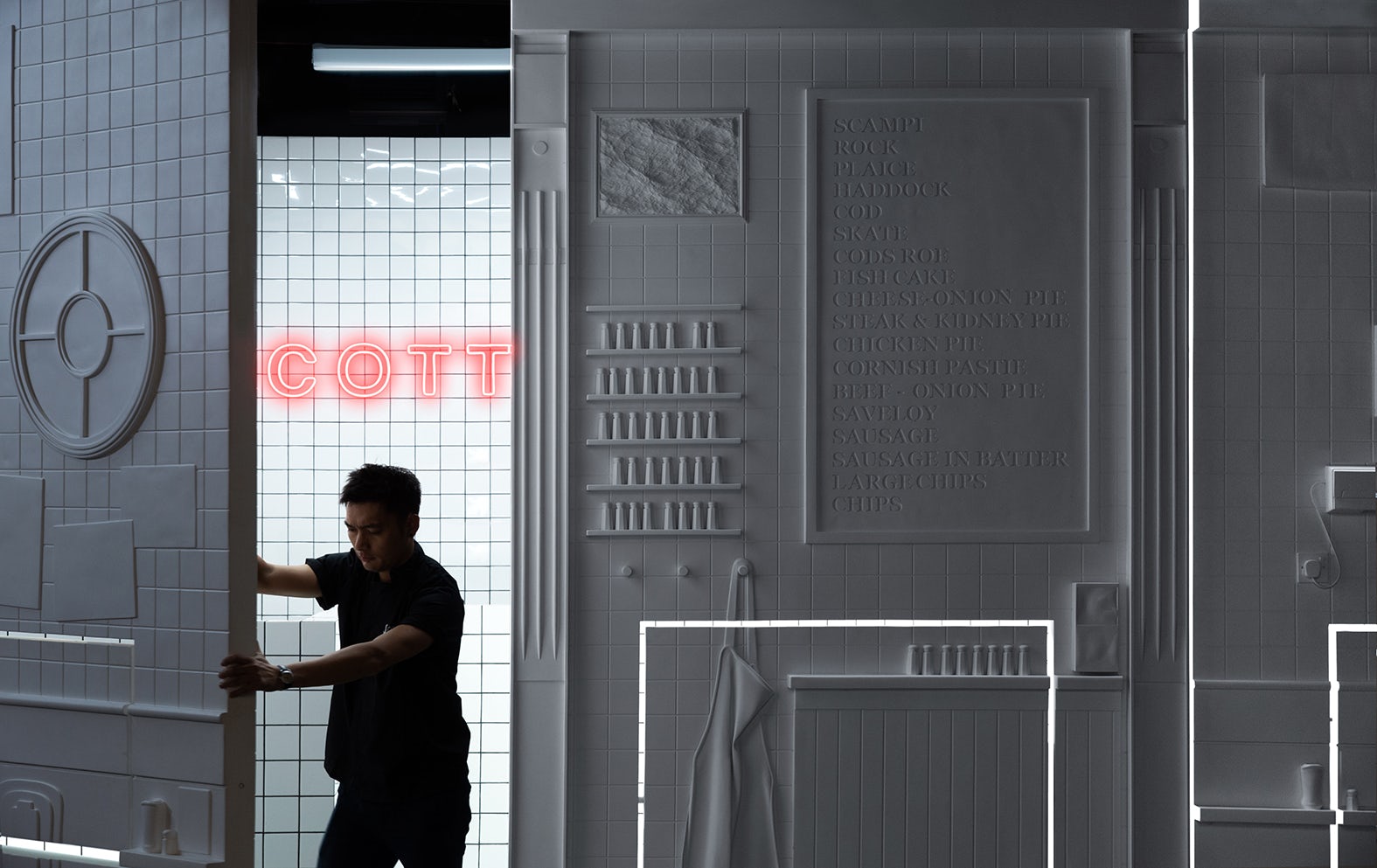 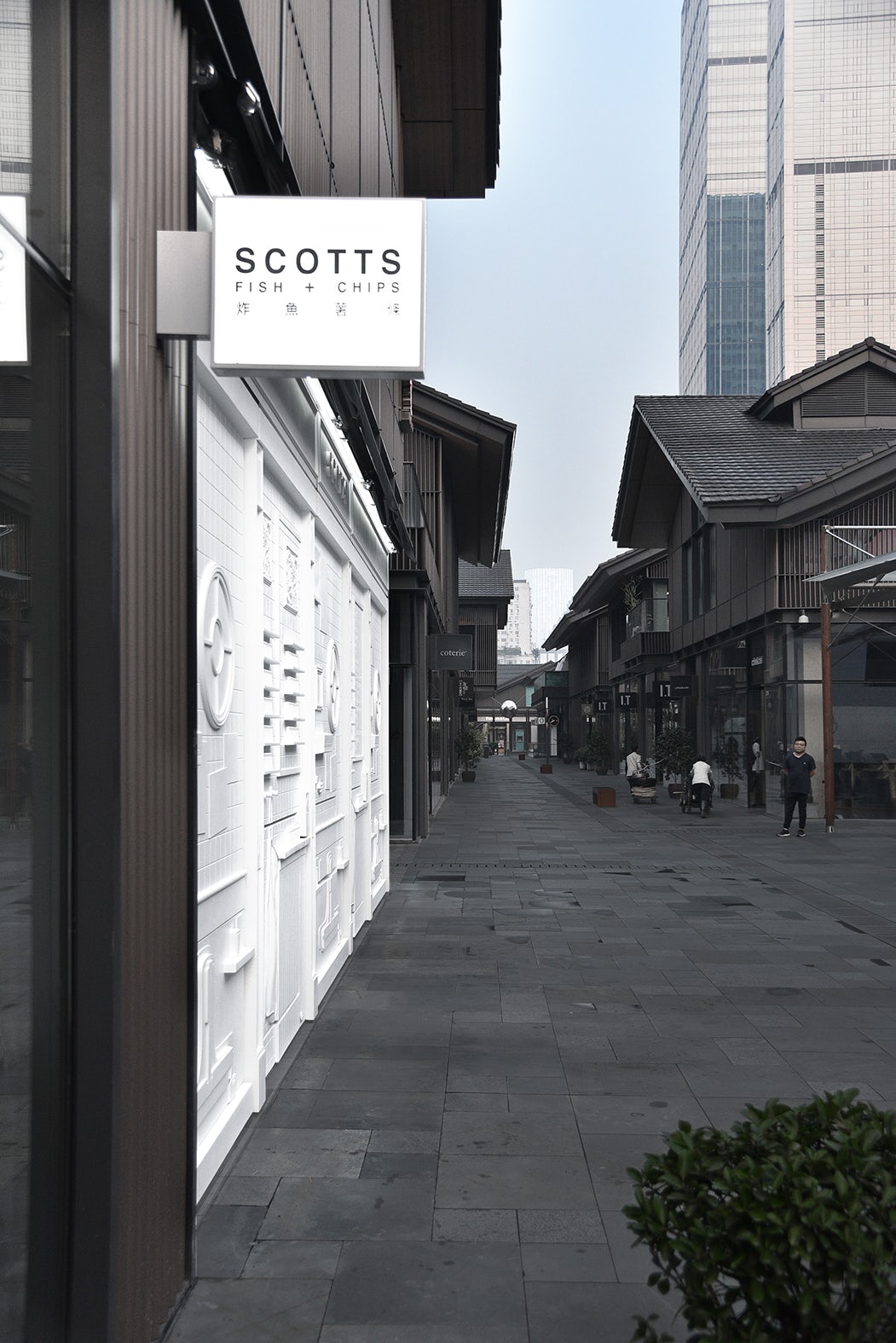 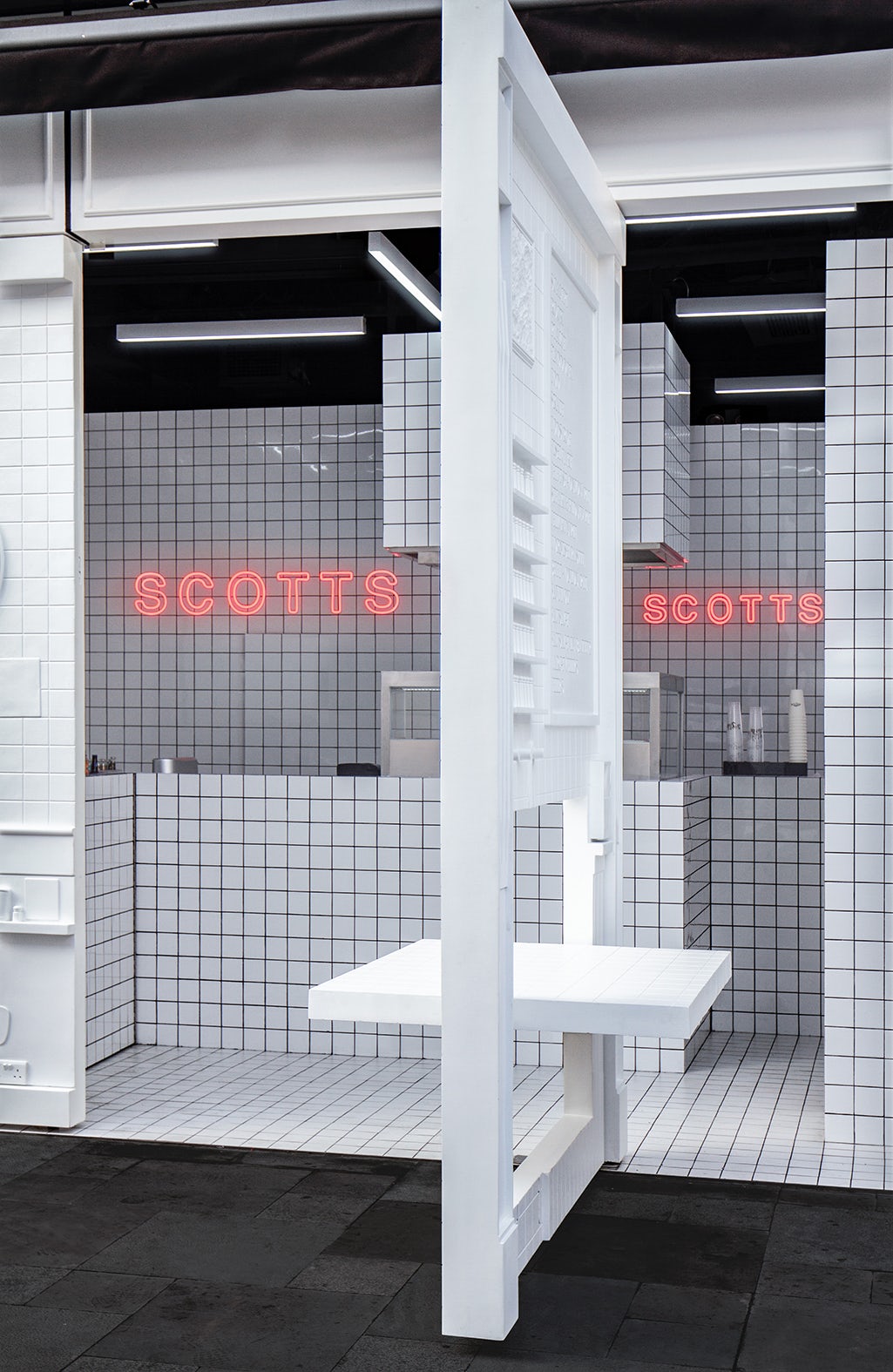 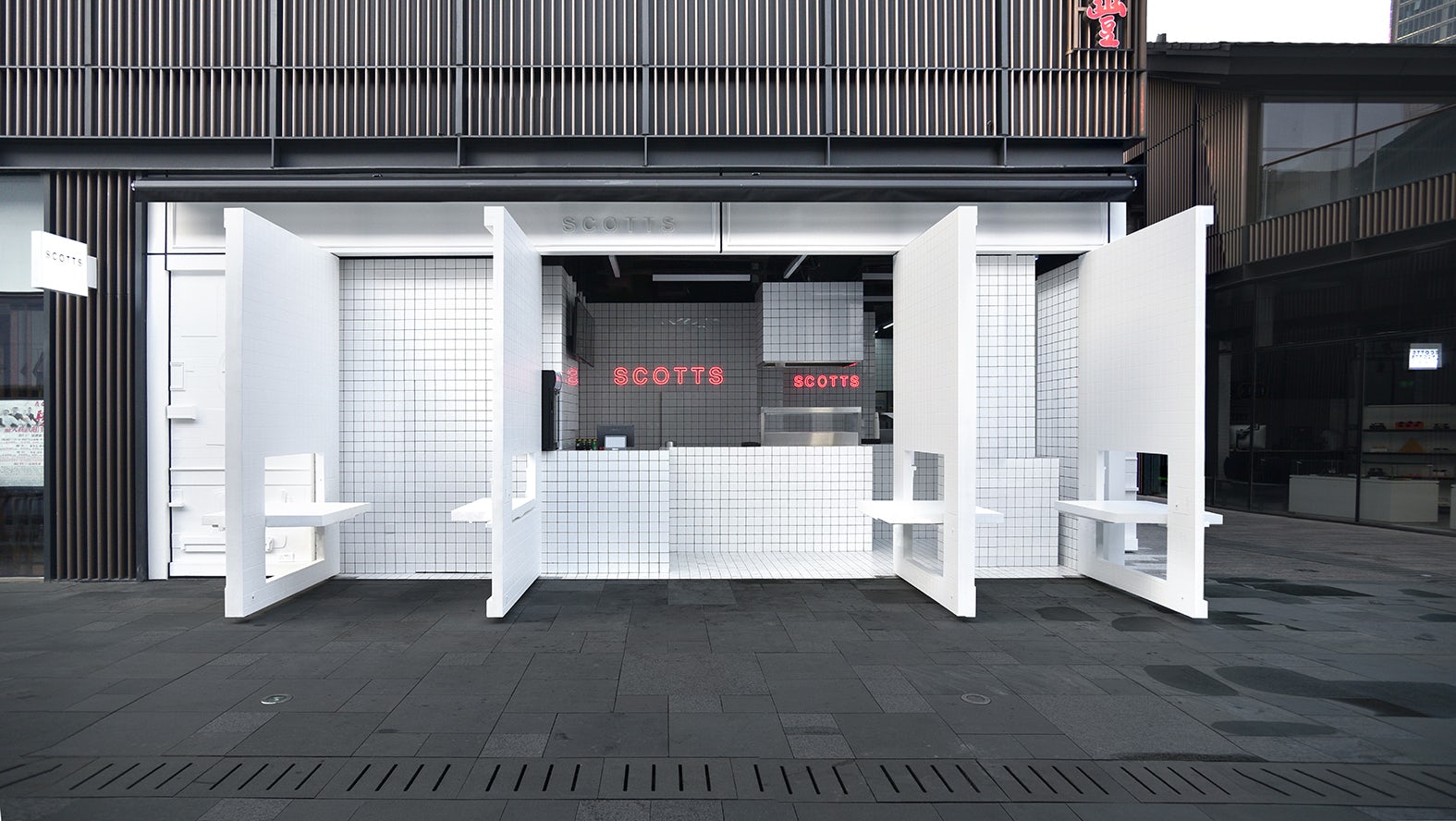