Sherwood Forest’s history dates back to the Medieval era, when it stretched across thousands of acres of Nottinghamshire and was used as a Royal hunting forest. It became a playground for kings and aristocrats, along with folklore hero Robin Hood and his band of Merry Men.

Today, Sherwood Forest has lost over 90% of its heathland and much of its woodland due to deforestation, but remains a popular destination for both tourists and locals. 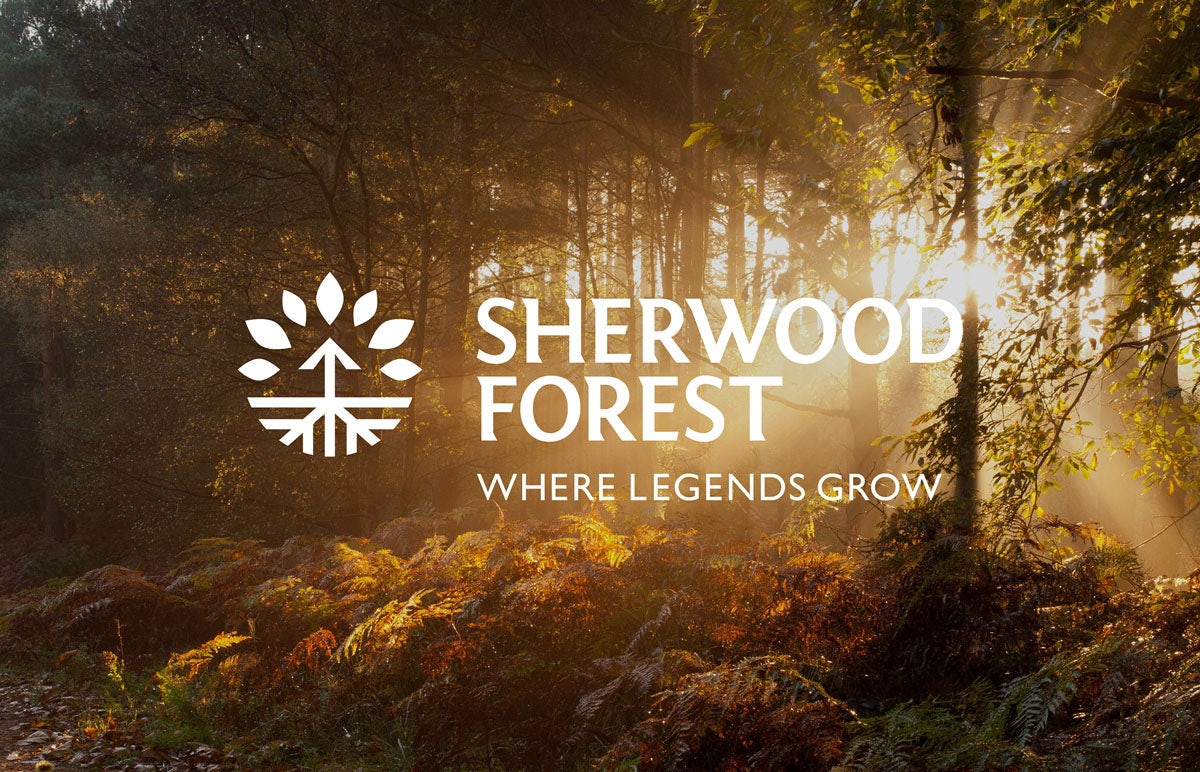 The Royal Society for the Protection of Birds (RSPB) took over management of the forest earlier this year, and has since expanded its conversation work and introduced a range of new activities for visitors.

The organisation’s work has culminated in a new, multi-million-pound Sherwood Forest visitor centre, as well as a new visual identity to coincide with its opening. 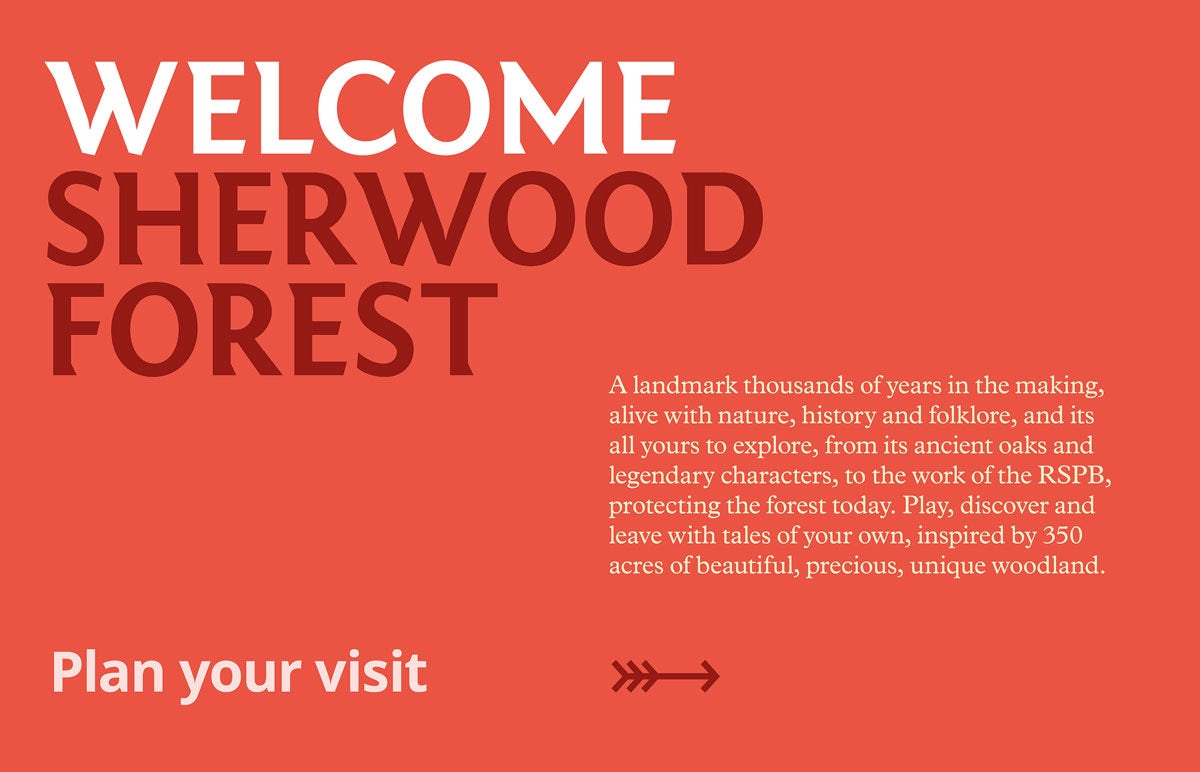 Sheffield-based studio Cafeteria was brought in to work on the rebrand, which needed to appeal to existing visitors but also attract a wider audience and nod to the forest’s new management.

“From the outset we all knew that it was not an RSPB branded reserve – Sherwood holds a unique place in the landscape, both real and imagined,” says Cafeteria. “The brand would need to represent a new era for the forest … but with the potential to withstand future changes.” 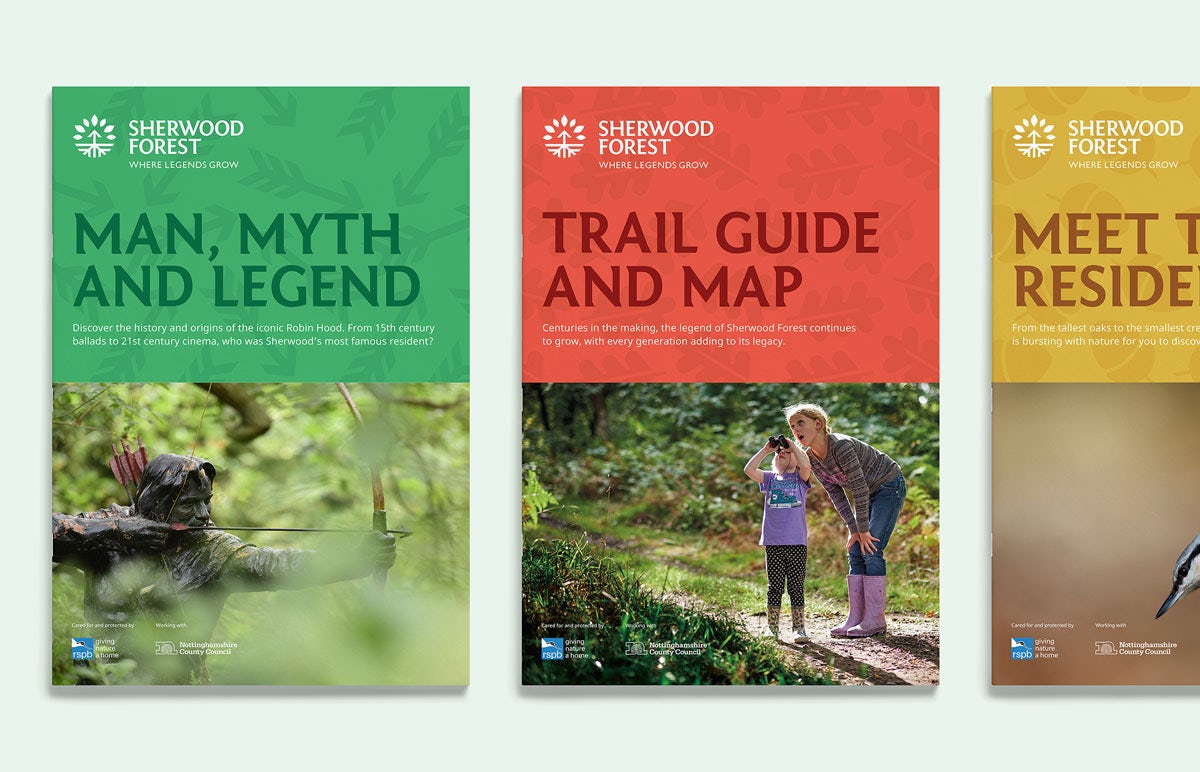 Conscious of avoiding clichéd ‘ye olde’ references, the studio has created a simple, graphic logo depicting a tree canopy with roots shaped like an arrowhead, shaft and fletching of an arrow, as a nod to the legend of Robin Hood.

Any allusions to Robin Hood have deliberately been kept subtle since the character has taken on various forms in popular culture over the years, whether it’s actor Kevin Costner’s interpretation from the 90s or Disney’s animated fox version. 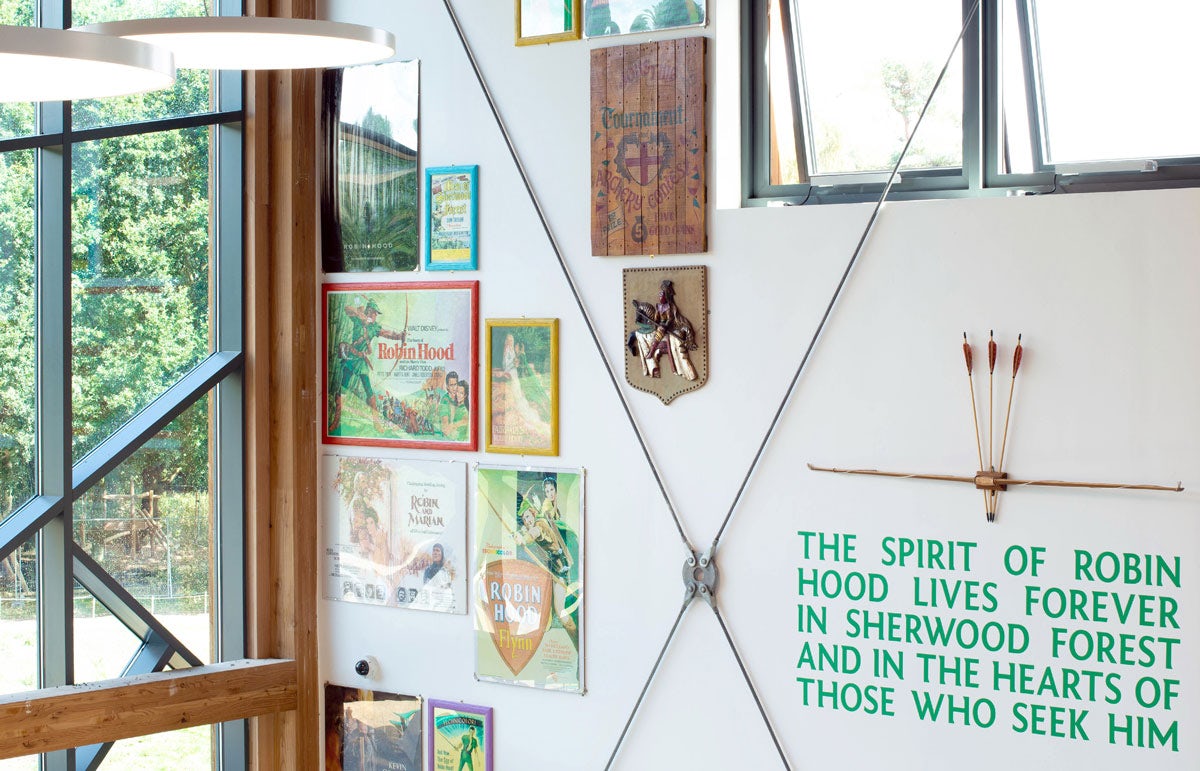 “Everyone has their own idea of Robin Hood,” says Cafeteria. “There is no singular depiction as that would become restrictive longer term and would overshadow the wider mission and experience of Sherwood. We didn’t need to reimagine the character, but we did want his story to feel a part of Sherwood’s.”

The name Sherwood Forest is set in a customised semi-serif font, Sherwood Sans, which is used as a headline font throughout the rest of the identity, and the logo is accompanied by the new strapline: ‘Where legends grow’. 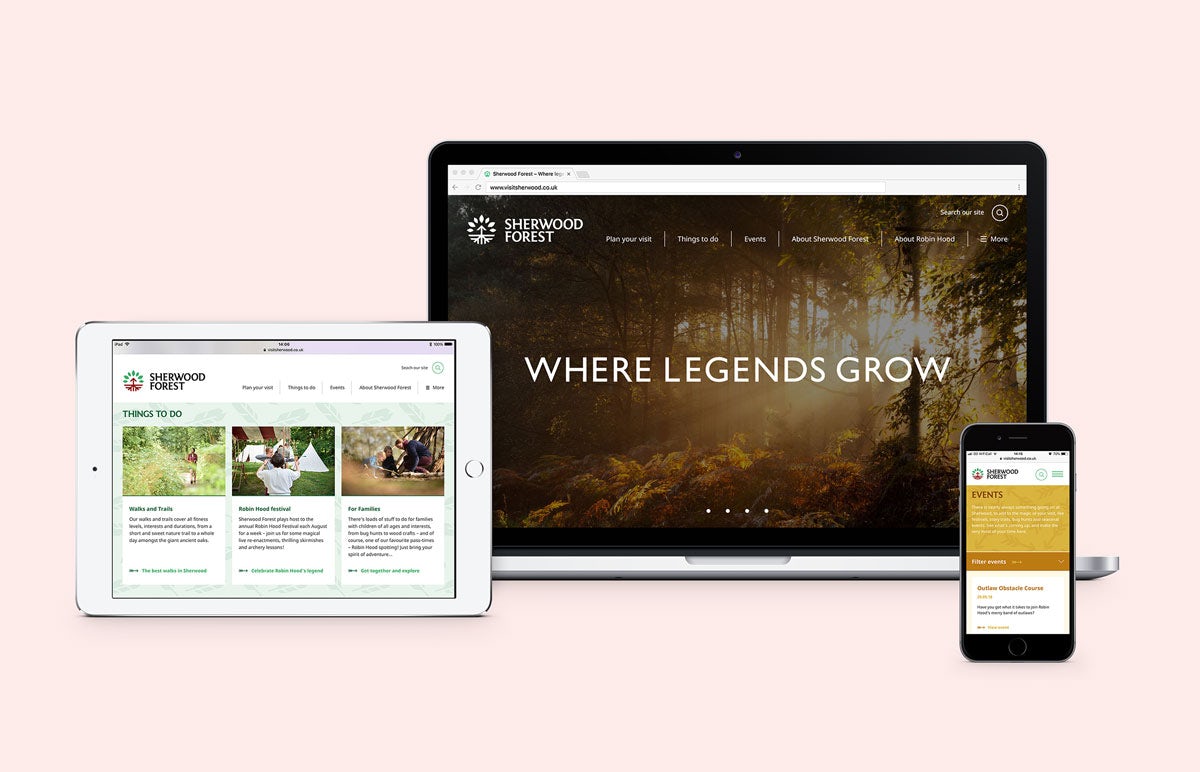 “It’s an idea that captures the magic of Robin Hood, the majesty of the forest’s oaks and presents the forest as a place to discover, explore and leave with new memories and tales to tell,” says Cafeteria.

Along with the new branding, the studio has also worked on the website, promotional materials, wayfinding system and the environmental graphics inside the new visitor centre. 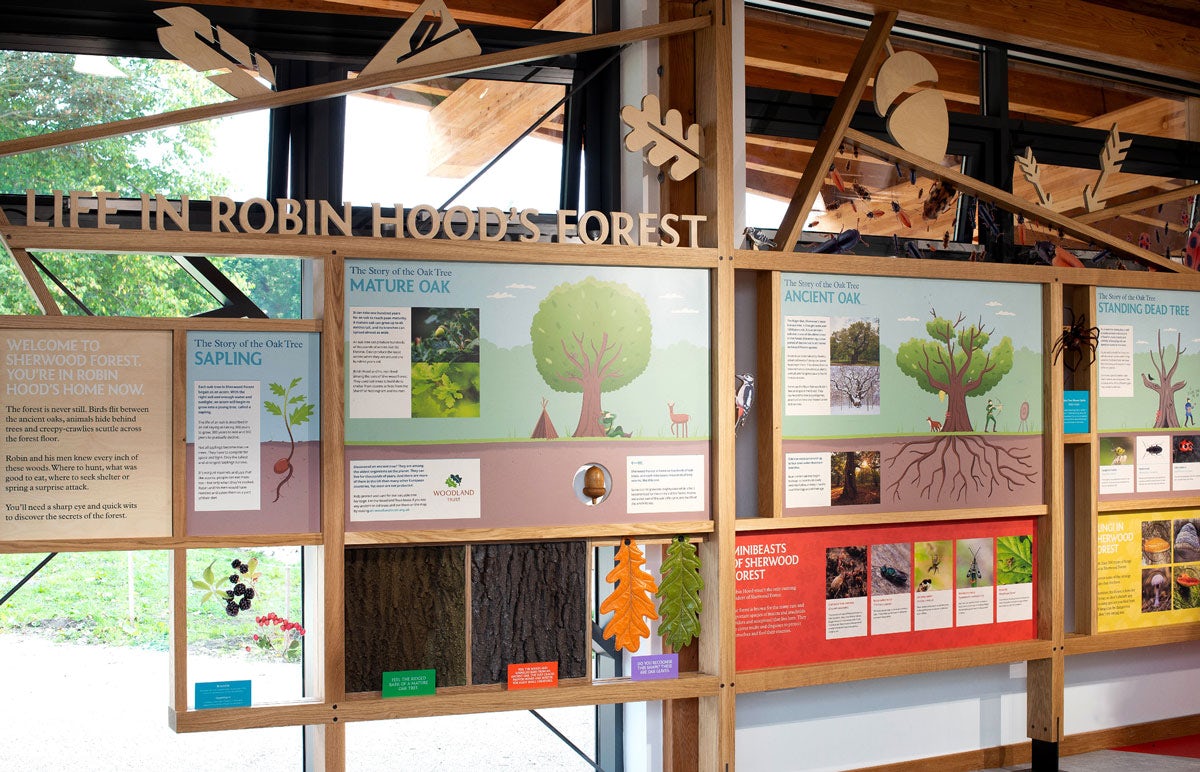 A colourful illustration of the forest, for example, is the first thing that greets visitors as they enter the centre. Created in collaboration with illustrator Tom Wooley, it fittingly depicts Robin and the Merry Men among the many dog walkers, picnickers, flora and fauna seen in the forest today.