Photographer Simon Norfolk used to photograph conflict zones and spent ten years in Afghanistan, Bosnia and Iraq to capture ruined landscapes and the impact military invasion had on daily lives. A couple of years ago the charity Project Pressure approached Norfolk to take what he knew about conflict and apply it to glaciers.

“On the surface it seemed like a huge leap, but when I started to research different locations, I realised that this is ‘ruin photography’,” Norfolk tells CR. “It was a very natural transition, except instead of [capturing the impact] of the forces of the American military, it’s the forces of climate change and our use of petrochemicals.”

Collaborating with Danish photographer and filmmaker Klaus Thymann, the results of Norfolk’s research is Shroud, which is currently on show as part of the Belfast Photography Festival, on till the end of this month. Norfolk and Thymann have photographed the ice-grotto tourist attraction at the Rhône Glacier, in the Swiss Alps, where local Swiss entrepreneurs have wrapped a significant section of the ice-body in a thermal blanket to preserve it.

Shroud refers to the “melting glacier under its death cloak” and confronts the viewer with a stark portrait of man’s attempts to feebly stop the effects of global warming, asking us to consider the role of community action in the face of environmental catastrophe. 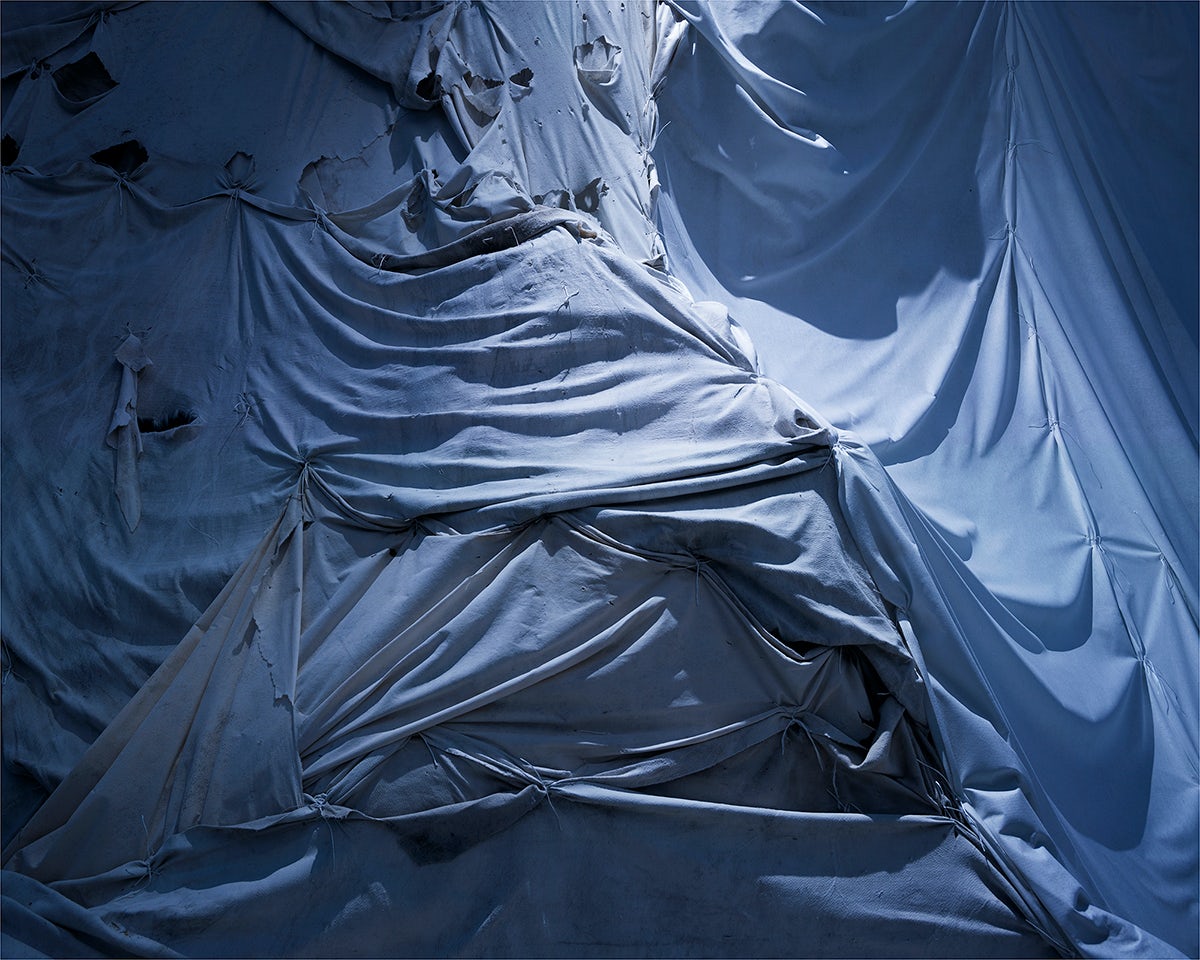 “It was very collaborative in terms of the look of the pictures. They are lit with a helium balloon, about the size of a car that is stored in the back of a minivan. The balloon lifts the flashgun while the camera is positioned on the glacier on a tripod,” says Norfolk of their process. “I would take the pictures while Klaus would control and position the balloon. In the pictures, the flashgun hangs just above the frame of the picture – and that’s the lighting that I wanted.”

The lighting in Shroud sets the bleak mood and Norfolk says they intentionally wanted it to look like the light you would get on a surgical table. “Klaus is holding the cable of the balloon and between us we’re just floating, letting it drift downwind, lifting it,” says the photographer. “I wanted it to be positioned exactly above to give us a light that looks like a mortuary slab. As a piece of kit, it’s like having your own personal moon.” 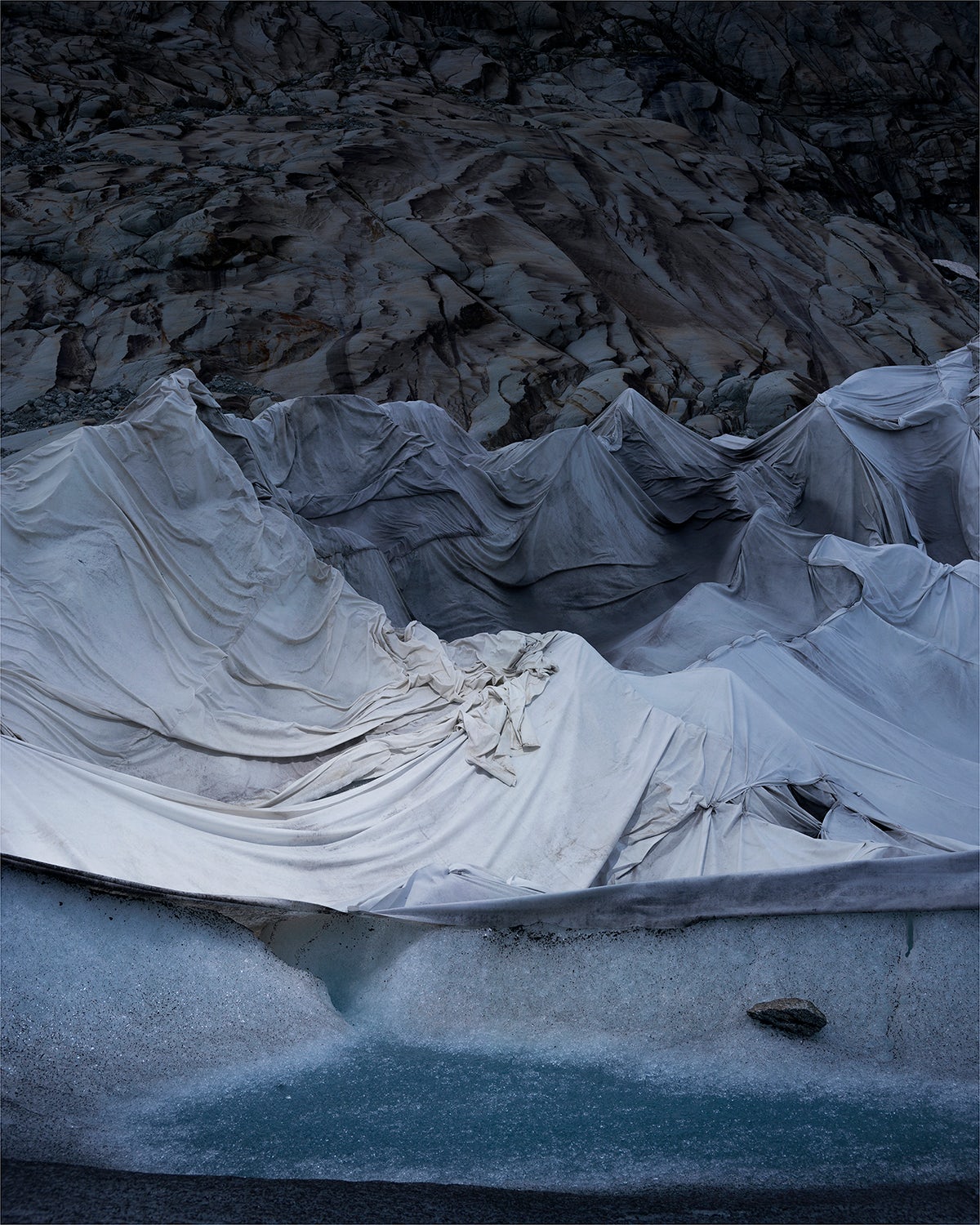 Before the shoot, Norfolk says Thymann was in charge of the science and making sure that what they were saying was journalistically correct and scientifically accurate. “My job was coming up with the metaphors; the idea of the shroud, how it looks like a ‘death cloth’, its resemblance to Carrara marble,” he says. “The very first time I saw the glacier it looked like it was being wrapped in a shroud to prepare it for its own funeral. I wanted it to look sepulchral.”

The images focus on the outside of the glacier, with the viewer only getting a peek at the grotto, a tourist attraction next to a main road in Switzerland that people are charged to walk through and which contains a gift shop. “The problem is that every year the glacier is disappearing, the grotto melts and is dumped into the lake, so they have to dig it every year,” Norfolk explains. “The glacier is disappearing further and further up the hill, so they put the blankets on to try and keep the business going. The blankets aren’t on for any scientific, aesthetic or ecological reason, it’s just money. They’re trying to stay in business.” 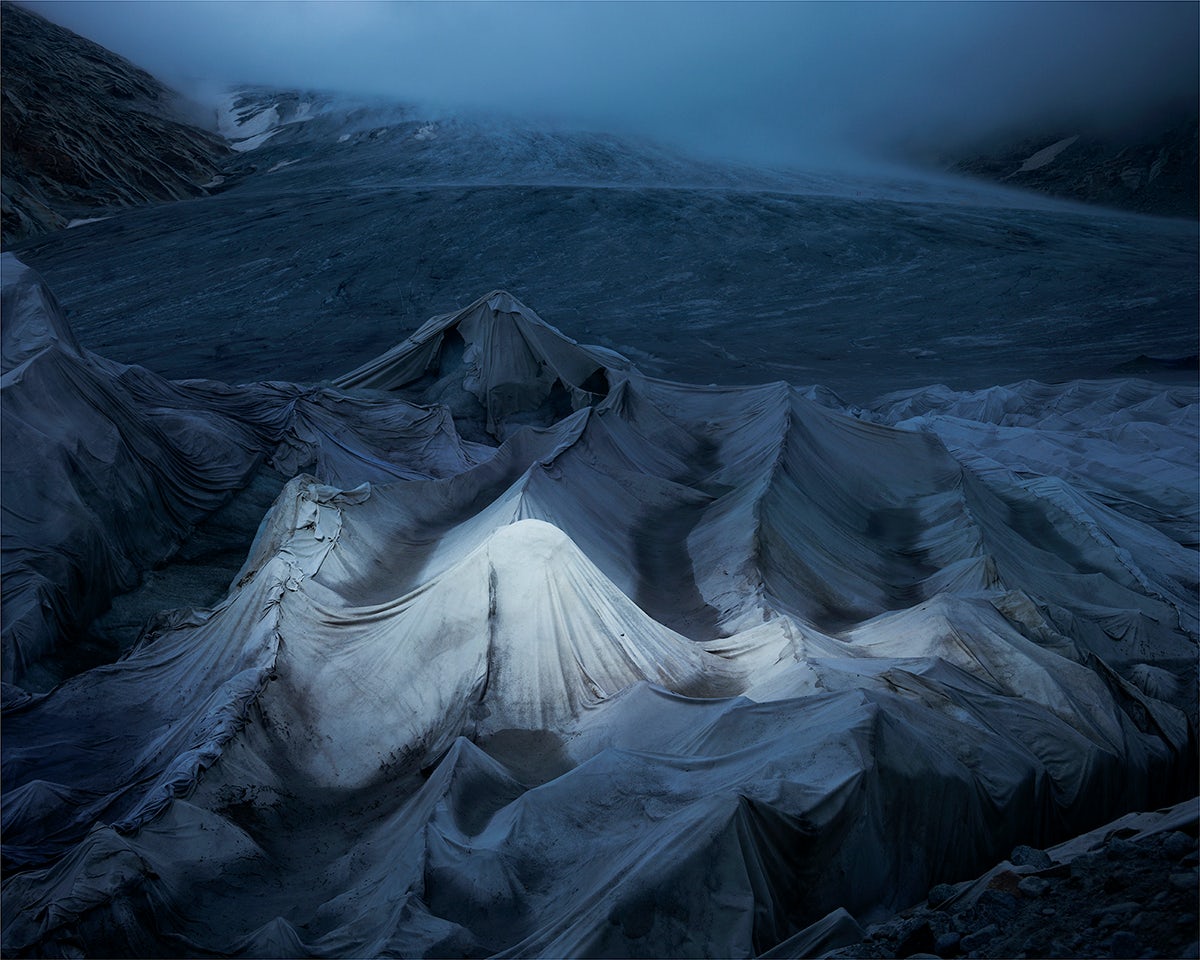 For Norfolk, this whole body of work is an attempt to get us thinking about what actions we need to take now, because the problems will only become more expensive or catastrophic the longer we delay. The photographer is now solely focused on climate change and he’s working on a new project about the effect of methane. With Shroud, he hopes viewers will feel the same sense of tragedy as he did.

“When I touched the glacier, I felt like I was touching a huge dying beast, one that was just fading away under the heat of my palm against it. I felt responsibility, too,” he says. “The most important thing about my work is that it’s beautiful because that’s the seduction that draws you in. It’s a journey that I want to take the viewer on by drawing them in with a beautiful image, but one that tells a very different story on closer inspection.” 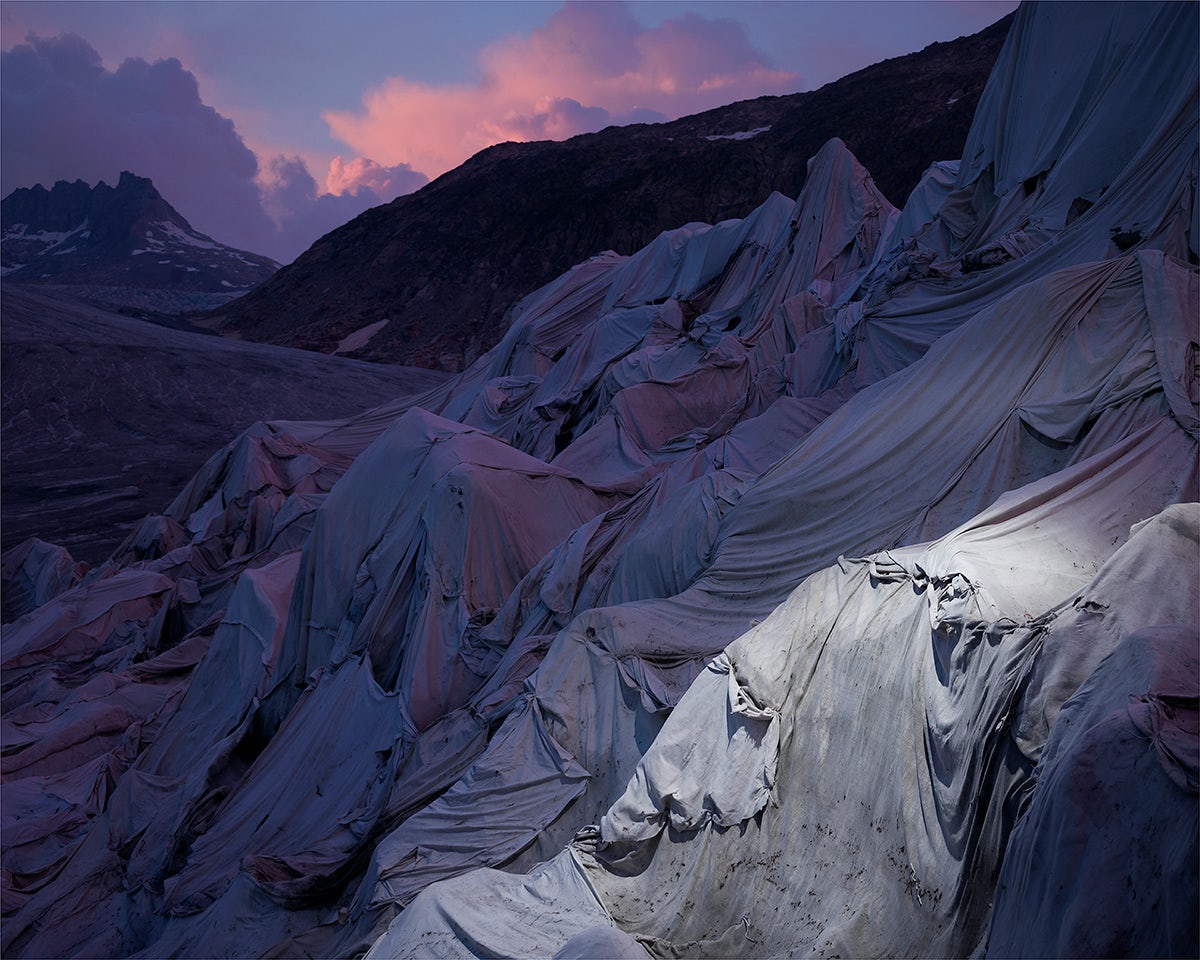 Shroud by Simon Norfolk and Klaus Thymann is on show until 24 June 2021 at Riddells Warehouse as part of Belfast Photo Festival; simonnorfolk.com; klausthymann.com