Born in Moscow at the turn of the century, Varia Bortsova was too young to remember the collapse of the USSR in 1991 after 70 years of existence. Once the largest country in the world, it was swiftly replaced with 15 different nations, along with a complex and muddled jigsaw puzzle of shared identities, cultures and visual artefacts that were left behind.

Bortsova began to take an interest in her country’s recent history after discovering her parents’ archive of home videos and cassettes, and quickly expanded her research to encompass everything from friends-of-friends’ photo albums to libraries and flea markets.

In 2016, she started a Twitter account called Soviet Visuals to consolidate these makeshift archives for a small group of friends. The page has since grown into a community of over one million people contributing their own photographs, videos and personal stories, as well as curious observers from all parts of the world.

In a new book published by Bloomsbury, Bortsova is hoping to give a glimpse of life behind the Iron Curtain to a wider audience. Containing over 200 images, it includes the founder’s own story along with the personal accounts of Soviet Visuals’ contributors. Here, Bortsova talks us through some of her favourite artefacts from the book:

The Soviets loved predicting the future: this 1930s magazine illustration depicts an electro-magnetic rapid transit running through the heart of future Moscow. Many of Soviet Visuals’ social media followers have pointed out that it bears a striking resemblance to Elon Musk’s Hyperloop project.

In the background you can see an outline of the Palace of the Soviets, the most grandiose of the unrealised projects of the Soviet government. Conceived in the early 1920s, it was supposed to become the tallest building in the world and be crowned with a 100-metre statue of Lenin. After the outbreak of World War Two the project was suspended, never to be resumed again.

I love this 1980s photograph of the space-themed Kosmos cafe in Minsk (present day Belarus). According to locals, the café was located in the depths of the Chizhovka-2 microdistrict and impossible to stumble upon by accident, you had to know exactly where to go.

The café was decorated with all kinds of space imagery on the walls, coloured lights all around and, most importantly, a special walkway where each block would light up as you stepped on it – something out of a sci-fi movie for a Soviet kid in the 80s. They also served milkshakes and ice cream in little vases.

This 1930 health poster is captioned ‘Are you taking care of your breasts? Temper your nipples with cold water daily’. Tempering, or strengthening the body through exposure to hot and cold temperatures, was a common practice in the USSR, but this particular version of it does raise some questions.

Upon seeing this poster on Twitter, one social media follower asked to clarify whether Soviet women’s nipples were made of steel – I can publicly confirm that they were not. 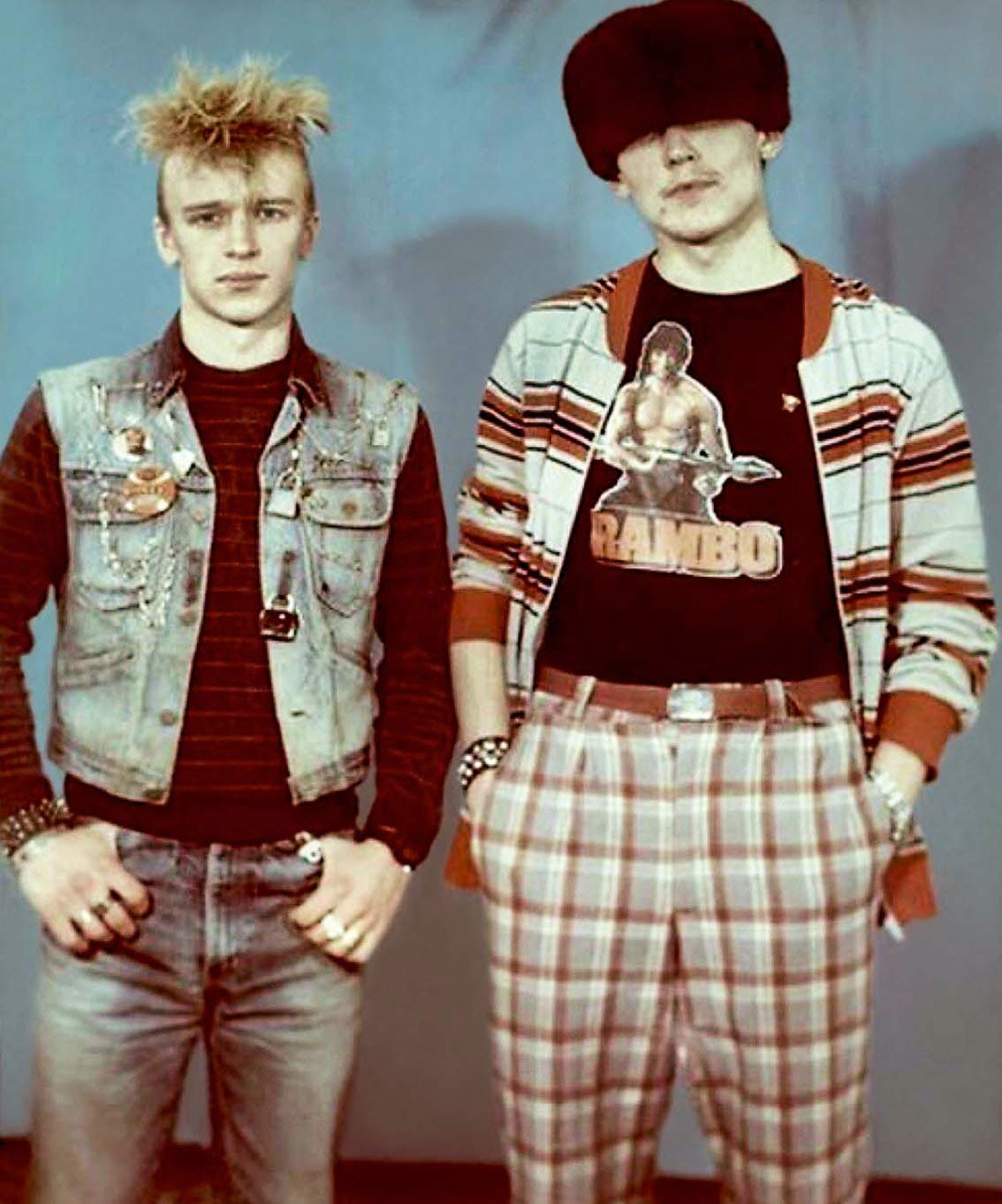 Bold 80s fashion experiments in action: the young man on the right pairs a traditional Soviet fur hat with a Rambo shirt, while his friend complements his denim look with a Komsomol (All-Union Leninist Young Communist League) badge. Soviet alternative fashion culture of that decade was a real mix of influences, and was representative of the changing times.

This anti-religion poster from 1965 is captioned ‘Granny said sternly: don’t go anywhere without God. But the bright light of science proved that there is no God!’.

Atheism was an element of state ideology in the Soviet Union, and the propaganda materials used to promote it were spectacularly imaginative. This one manages to simultaneously celebrate the glories of the space race while highlighting the importance of matching your head scarf to your dress.

This 1938 Soviet poster reads: ‘Mayonnaise sauce. An excellent condiment for all cold meat, fish and vegetable dishes’. In the absence of any variety on the shelves of Soviet grocery shops, print ads commonly focused on promoting the product itself rather than any branded variation of it.

In this case it is mayonnaise, but there are countless posters covering everything from sausages to winter hats to canned fish. It’s an unusual concept compared to what the modern consumer is used to in 2020, where it seems like everything and everyone has a brand.