Sri Lanka is one of the most beautiful places you will ever visit. Balmy coconut groves, eye-wateringly stunning beaches and breath-taking mountainous landscapes. It is blessed with a stunning topography, an incredible cuisine, and a wonderfully generous set of customs and values.

But the story of this jewel in the Indian Ocean is one beset with tragedies too. From three brutal colonisations by the Portuguese, Dutch and British respectively, to over 30 years of civil war between Tamil and Sinhalese ethnic groups (which had been formally assigned by the British Empire). The war had a bloody ending in 2009 that has yet to be acknowledged within Sri Lankan public consciousness. Even more recently, the April bombings of 2019 shattered the island’s fortunes once more after a brutal attack claimed by IS that has seen the island’s Muslim minorities persecuted.

For me Sri Lanka has always been a place full of contrasting emotions. Love and hate. Beauty and ugliness. Kindness and violence. And now it is facing perhaps its biggest tragedy to date. An unprecedented financial crisis that is being touted as a potential ‘canary in the coal mine’ for the entire world economy.

Financial mismanagement, unsustainable debt, strong man politics and frankly bizarre decision making, mixed in with Covid and a Russian-Ukraine war that decimated the tourist industry (Russians and Ukrainians made up a significant proportion of Sri Lanka’s tourism in 2021). This series of unfortunate events has led to Sri Lanka becoming the first South Asian country ever to default on its loans. And the worst is yet to come.

This is a deeply personal tragedy for me. I am a proud British Sri Lankan. Half Tamil, half Sinhalese. I was born in Southampton, with parents who were born and raised in Colombo who made a new life in the UK in the 1980s. I struggled with my identity growing up in Britain, caught between two worlds, but as I grew as a person and professionally, my dual heritage has consistently been my greatest strength in life.

My wife Lucy and I spend most summers in Sri Lanka. We got engaged there. Have many relatives and friends. Lucy even completed a PhD in the country. Our connection to Sri Lanka is deep, and complex.

But on visiting this April, it had to be one of the most haunting experiences I have ever had there. Our friends and fellow creatives have seen their savings devastated due to inflation. Getting visas to other countries is near impossible, with a passport office that hasn’t even got enough paper to issue passports. 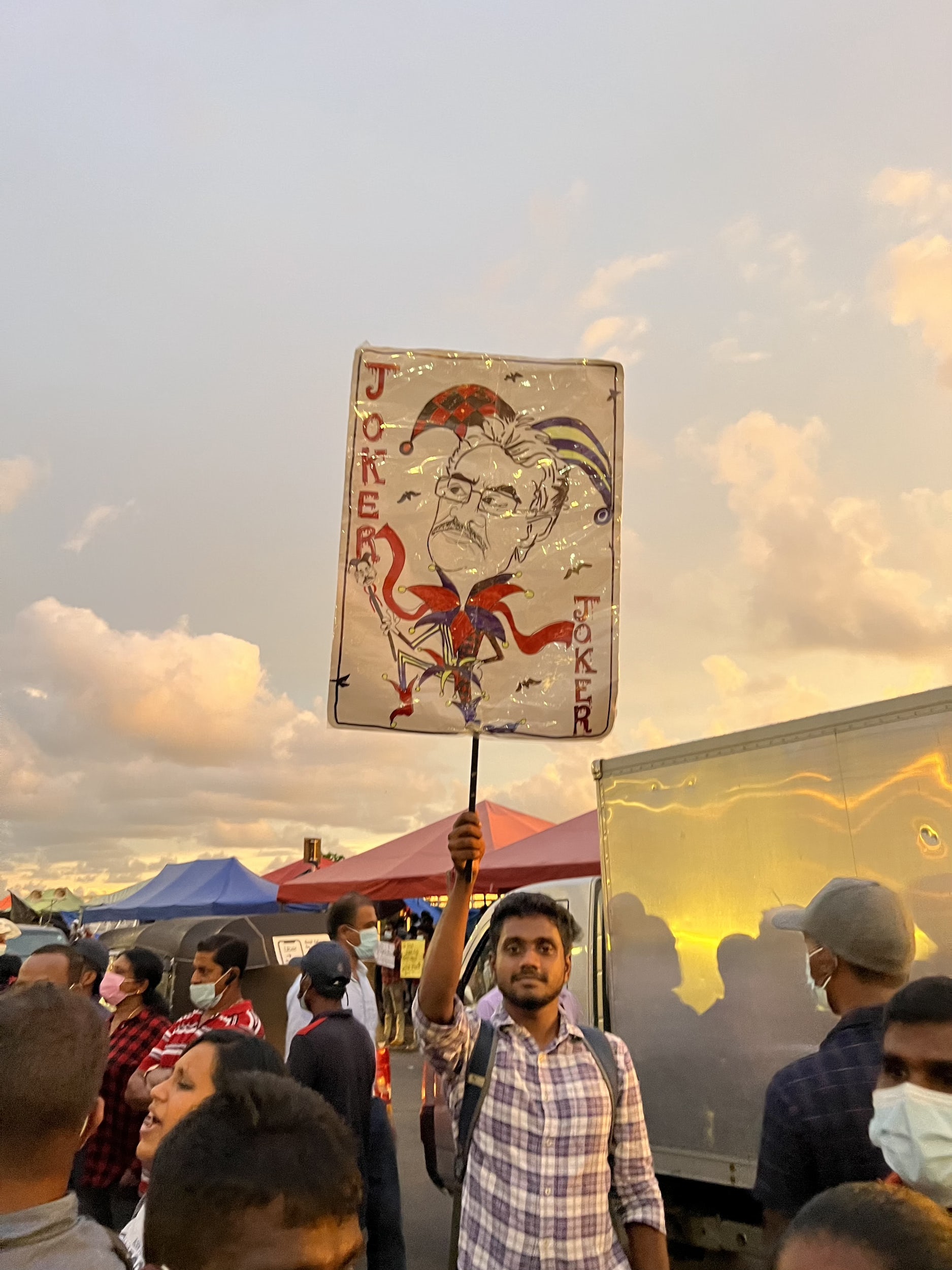 Fuel is hard to come by, rendering travel even across downtown Colombo a luxury. Relatives are unable to have severe illness treated due to medicine shortages. And though some of the more affluent in Colombo can still rely on generators, daily electricity cuts are the new normal for almost everyone else.

Creative companies are shutting down, jobs are being lost. For younger Sri Lankans especially, the future might as well not exist, so bleak is the outlook. Living my staggeringly stable life in comparison, I once again feel caught between two worlds.

My day-to-day reality running a creative company, working with brilliant brands and enjoying a post-Covid summer like no other, and then doom-scrolling Twitter and WhatsApp seeing things worsen for our nearest and dearest in our second home. It’s an unimaginable and incredibly real reality at the same time. 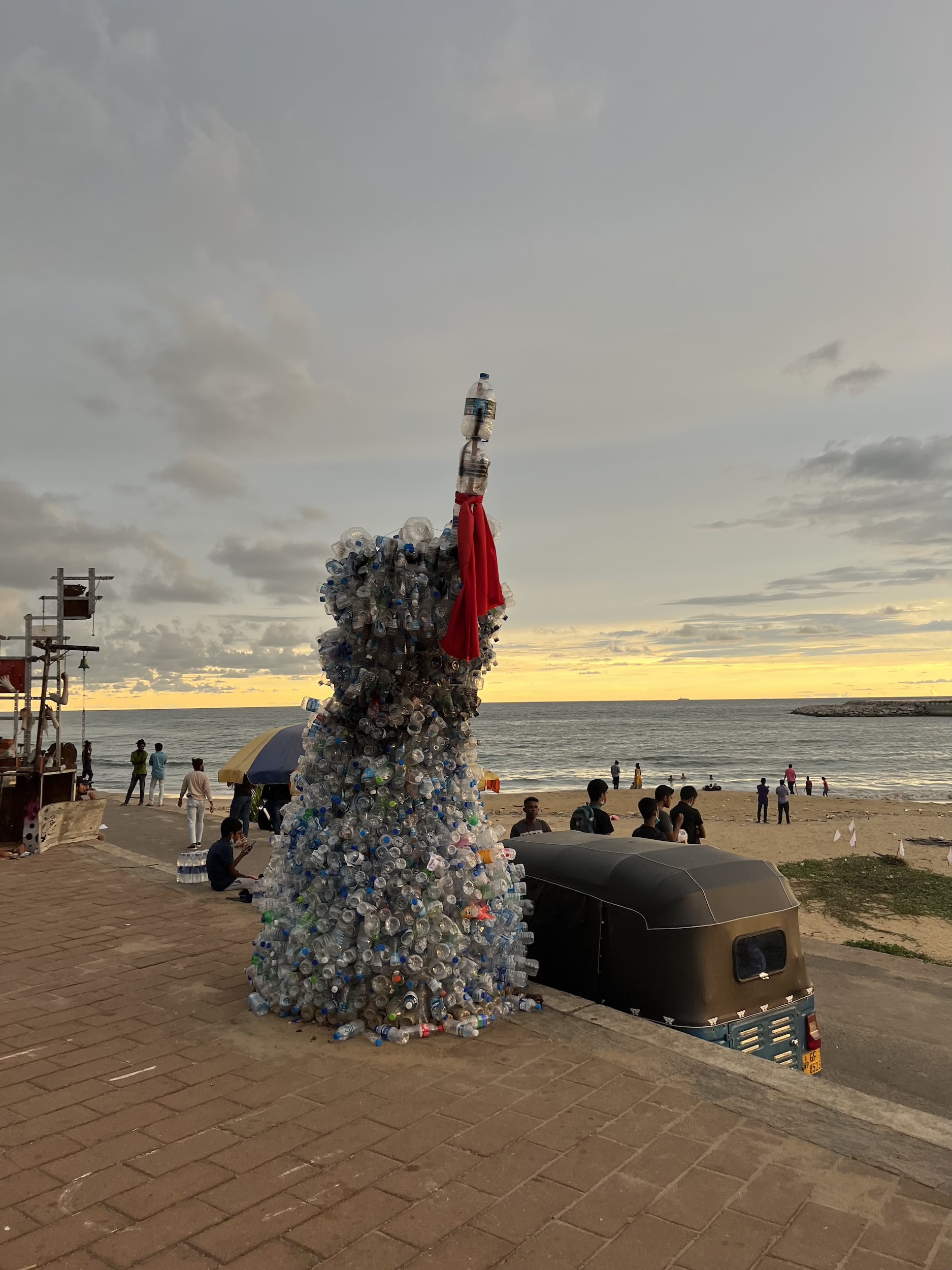 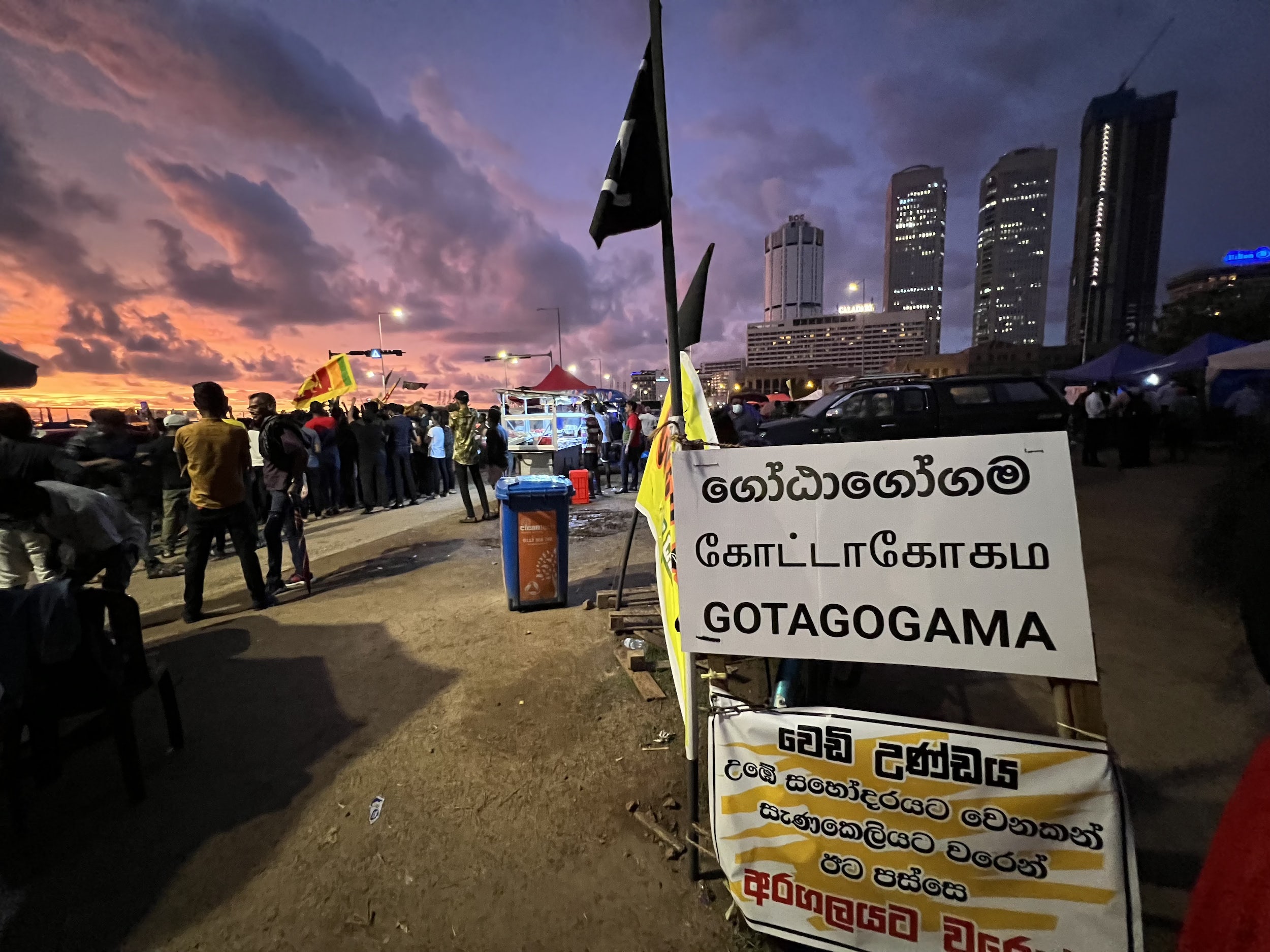 So when the skies are darkening, and chaos is looming, where does creativity stand? This is the silver lining to those clouds. The inspiring result of our visit in April was seeing the unprecedented protests that emerged out of the crisis. Led by young people, many of whom are creatives who are channelling their talents and their anger into something constructive that could bring about change.

The protests were dubbed ‘GotaGoHome’, after the demand to oust President Gotabe Rajapakse from government. The Rajapakse family has long had a stranglehold on Sri Lankan politics, and is largely responsible for the current situation the country finds itself in.

The protesters formed their own village – GotaGoGama – on Colombo’s famous Galle Face that at one point attracted over 100,000 people every day. I was amazed at the scale of artworks, performances and banners, which came from many different groups across Sri Lankan society. I had never seen so many religions, ethnicities, regions and ages represented in one unified vision. 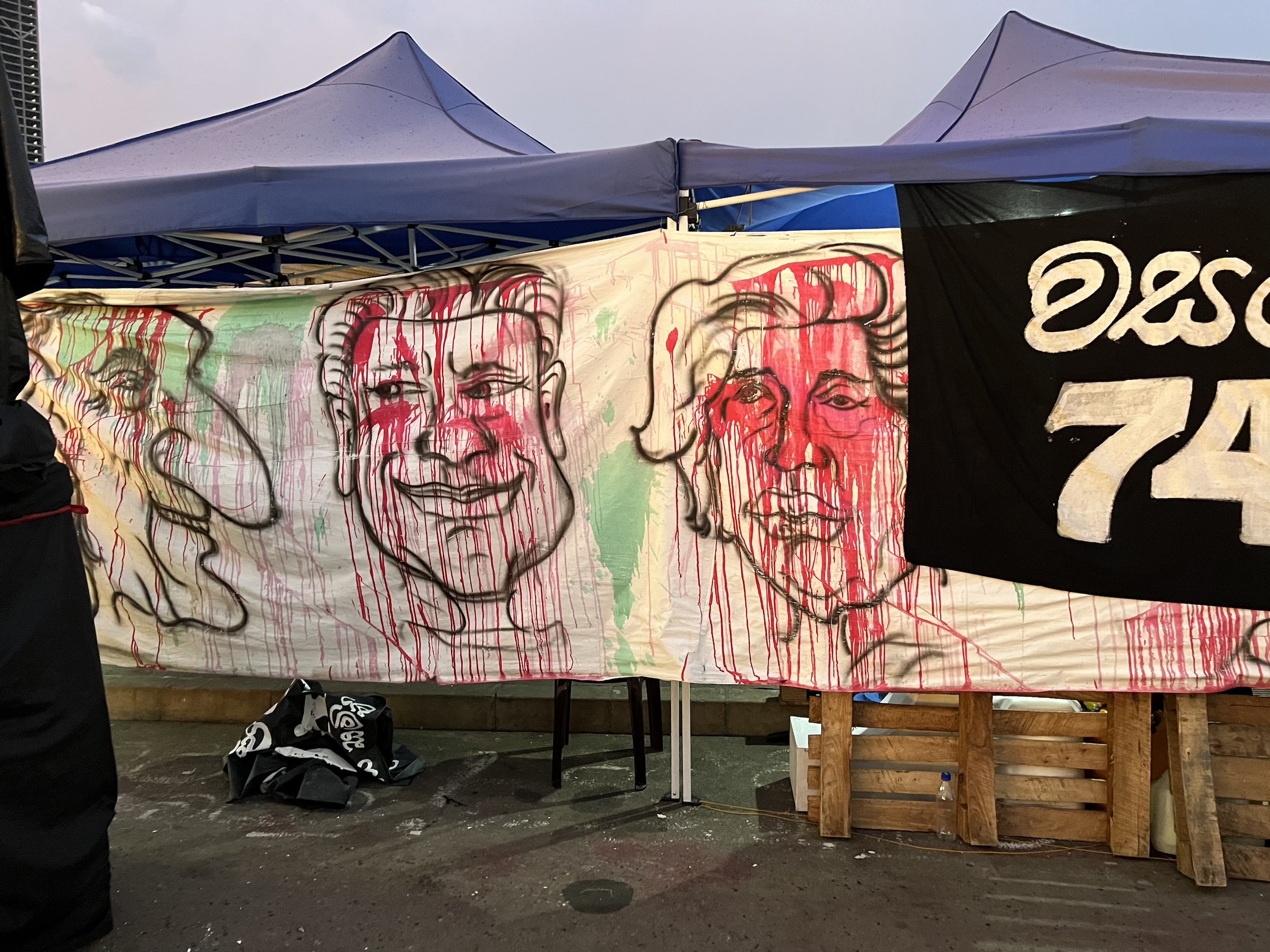 Speaking first-hand to friends from the creative industries, many had almost stopped their day jobs completely in order to harness all their efforts towards the protests. Not knowing the outcome, but feeling there isn’t any other option.

Since we left at the end of April, circumstances, as predicted, have become far more extreme. Those peaceful, even hopeful early months of the GotaGoHome protests are long gone. Police violence and arrests against protesters, who have used creativity as their weapon, have raised the stakes.

Meanwhile, the squeeze is beginning to be truly felt, with the government resorting to giving workers time off to grow crops as food stocks diminish at an alarming rate.

I wish I could write something hopeful, optimistic and inspiring. But honestly all I can report back is pain, agony and fear. A sense of hopelessness stretches out as Gota has not gone, and the economy continues to tank with no sign of recovery. Worse still, the room and space to create feels ever more trivial as the average Sri Lankan struggles to simply exist. 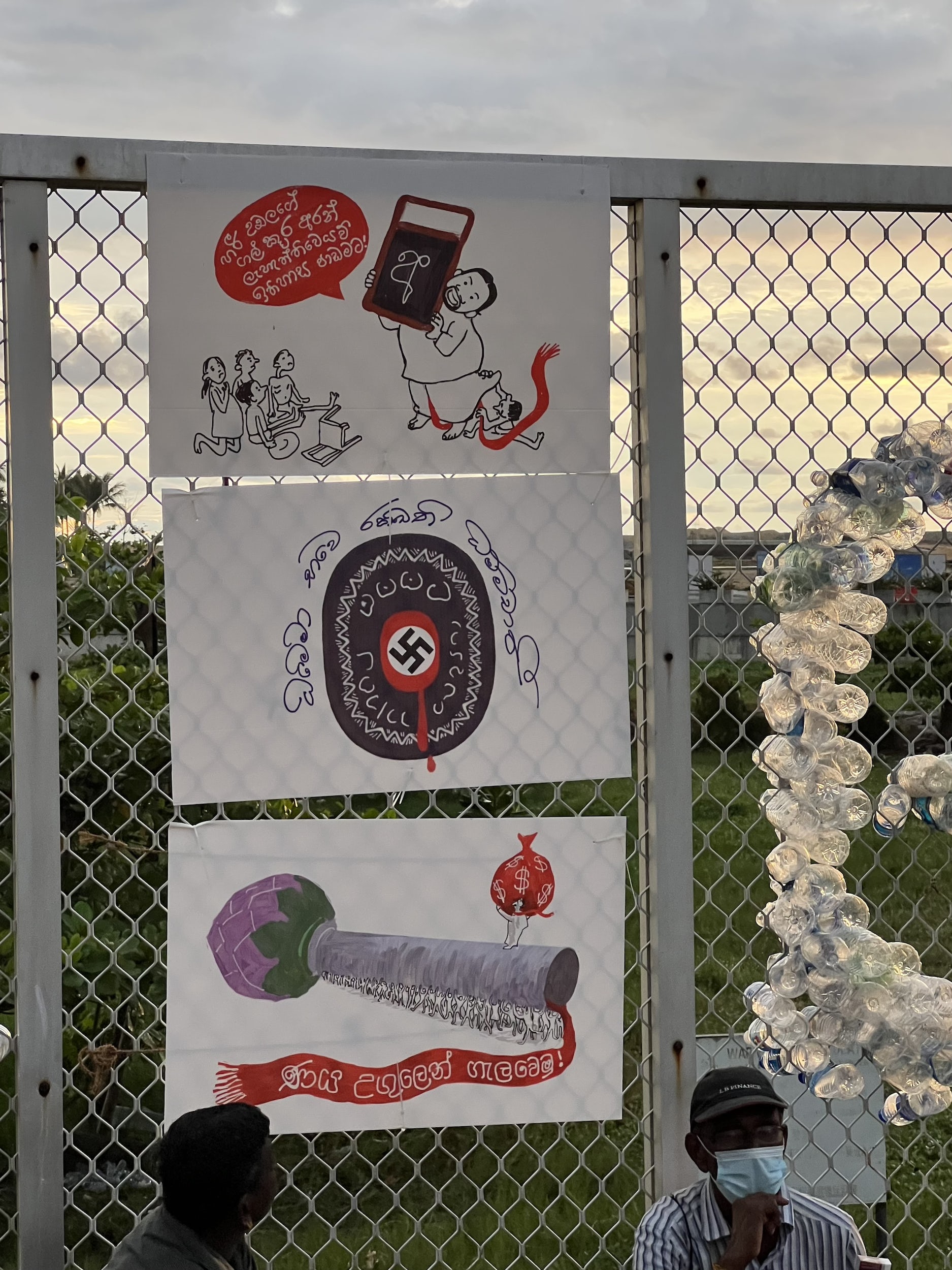 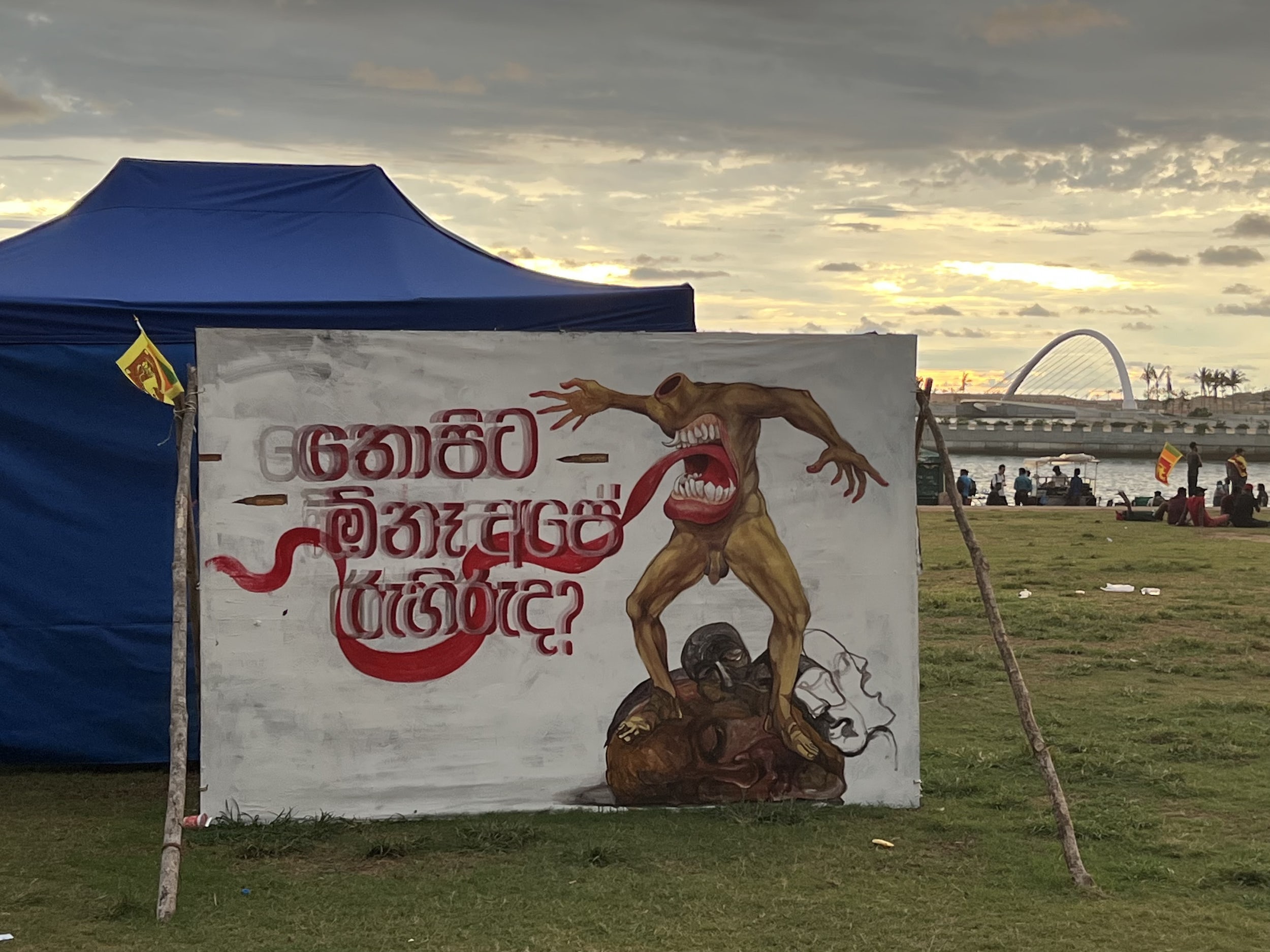 The only learning I can offer is that five years ago if you’d told me Sri Lanka would be here, it would have seemed impossible. So many diaspora had travelled ‘back’ to start up their own creative enterprises and outlets: the large majority of them are now leaving.

A series of unfortunate events can suddenly lead to catastrophe. Our way of being creative can be quickly disrupted, perhaps permanently.

So take nothing for granted. The money may not always flow, and times will almost certainly not always be good. But also, if it took only a few years for fortunes to change so drastically, perhaps they can change again once more.