Well it’s been another strange year for film marketing, a mix of uncertainty about when/if films would be released and the increasing dominance of streaming sites making the most of this opportunity to fill the void.

Nevertheless, chaos hasn’t stifled the incredible creativity that studios are calling upon to champion their product, with a fantastic variety of illustrative approaches that eschew homogeneity. Here are some of my highlights from 2021: 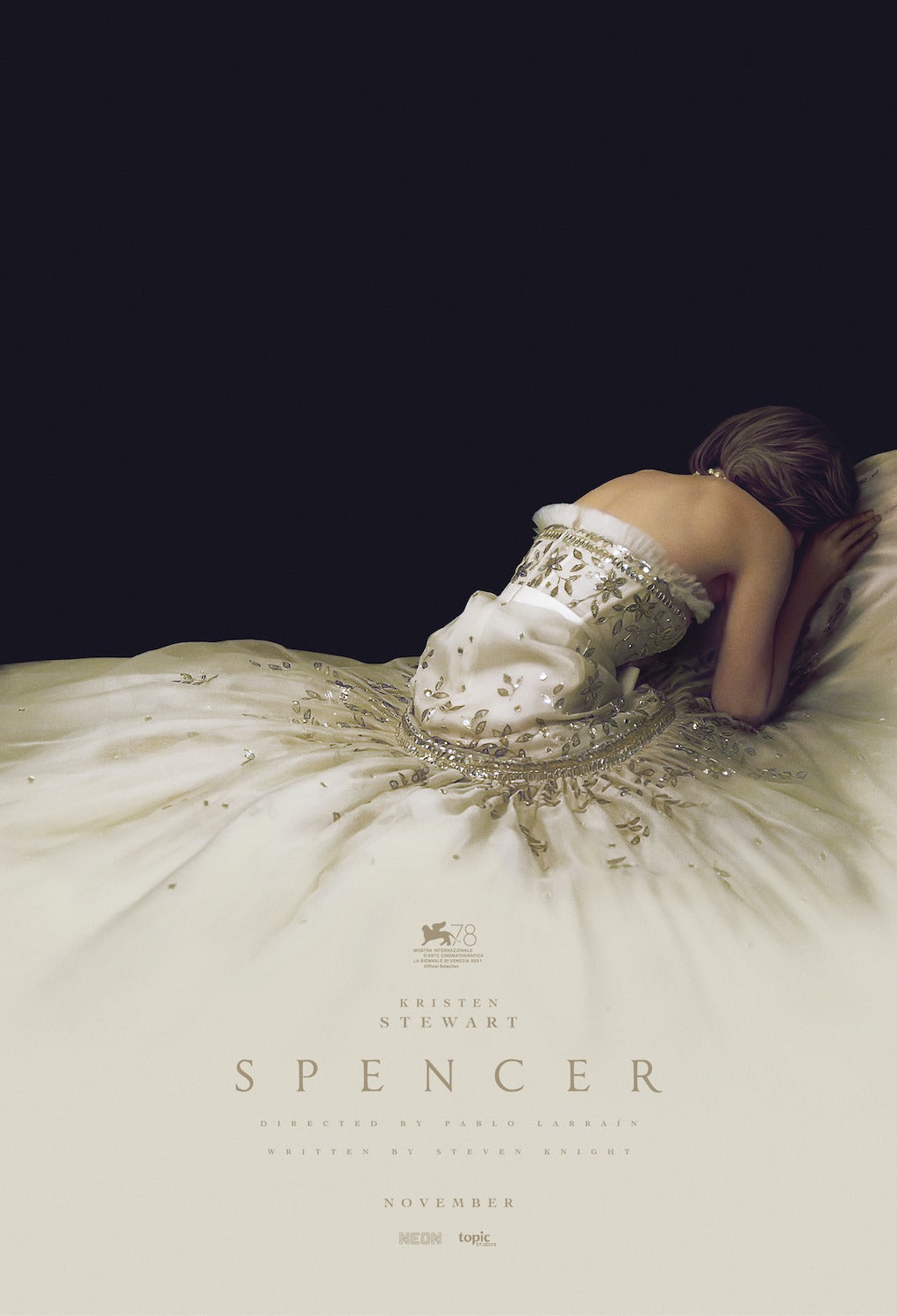 Spencer; Design: Empire Design
Faced with coming up with something that didn’t look like an advert for the next season of The Crown, Empire Design launched the Spencer poster campaign with this bold, tragic image, burying Kristen Stewart in a sea of taffeta. (Diana’s particular tale of abandonment within privilege apparently lends itself well to interpretation – see also Concept Arts’ equally evocative 2013 poster for Oliver Hirschbiegel’s Diana.) 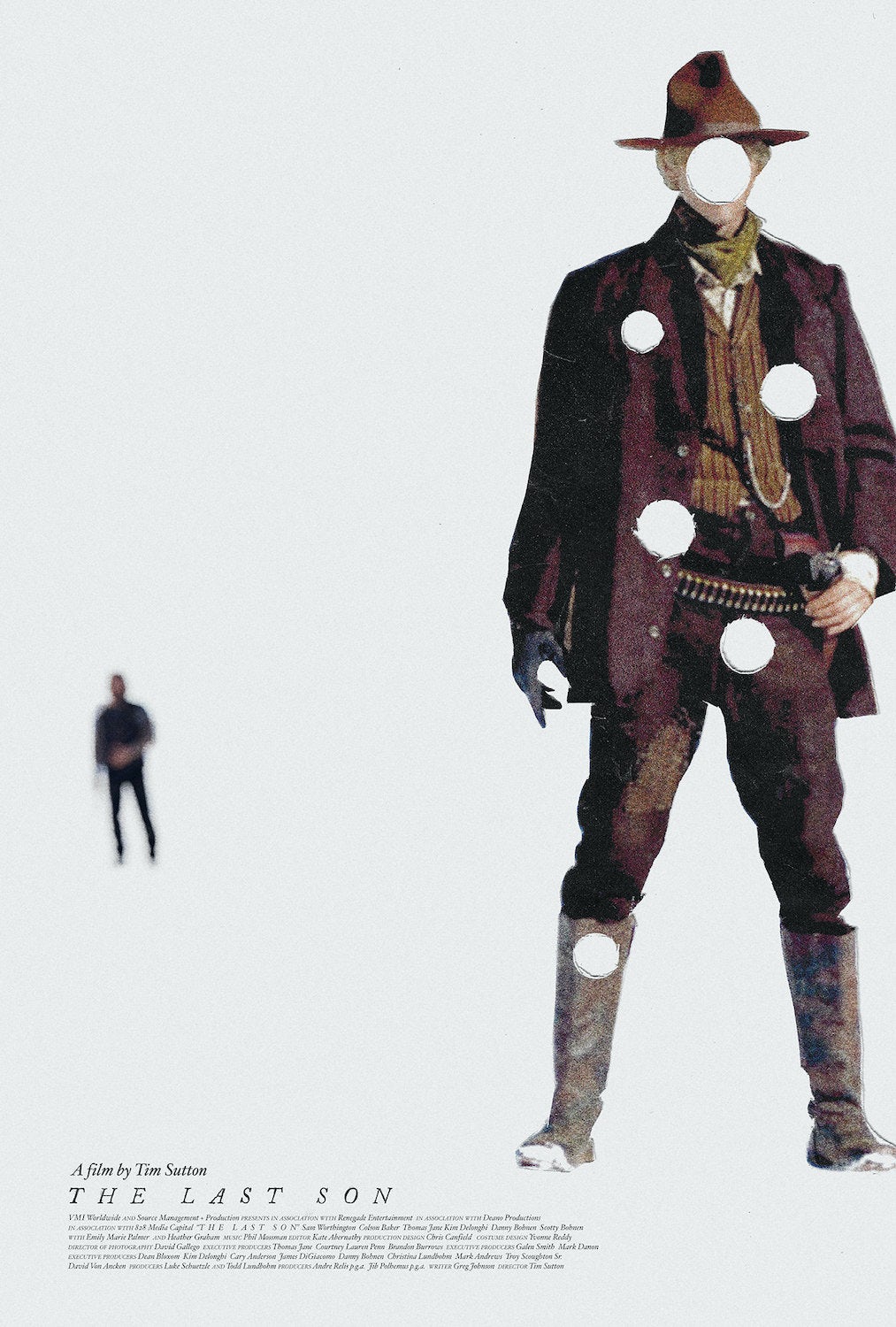 The Last Son of Isaac Lemay (née The Last Son); Design: Caspar Newbolt
With a wry nod to its star’s name – Machine Gunned Kelly? – Caspar Newbolt avoids the usual grizzled-faces-and-dusty-vistas approach for Tim Sutton’s modern western, opting for something more abstract. As with many on this list, a more conventional poster was also used, but strong visual identities like this are essential for standing out among streaming services’ endless carousels of content. 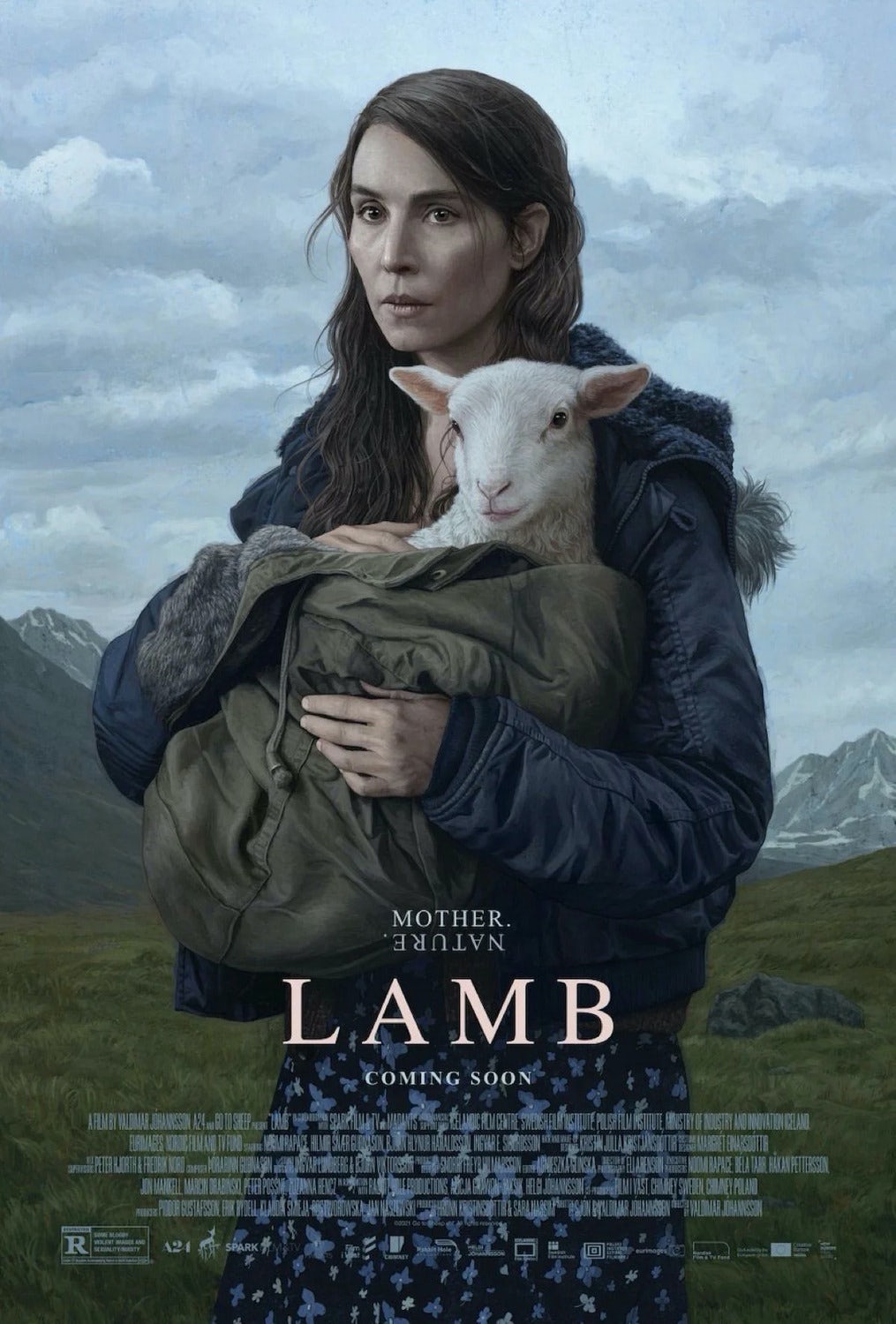 Lamb; Design: Rory Jurtz and AV Print
Cinema has gone a bit Old MacDonald of late, what with First Cow, Pig and Andrea Arnold’s forthcoming Cow (the single piece of IMDb trivia being “Just about two cows that do cow stuff”). Perhaps the most sinister and surreal of this cycle of films is Valdimar Jóhannsson’s Lamb – promoted with this stunning Rory Kurtz painting of Noomi Rapace cradling the titular sheep-baby like some kind of woolly messiah. 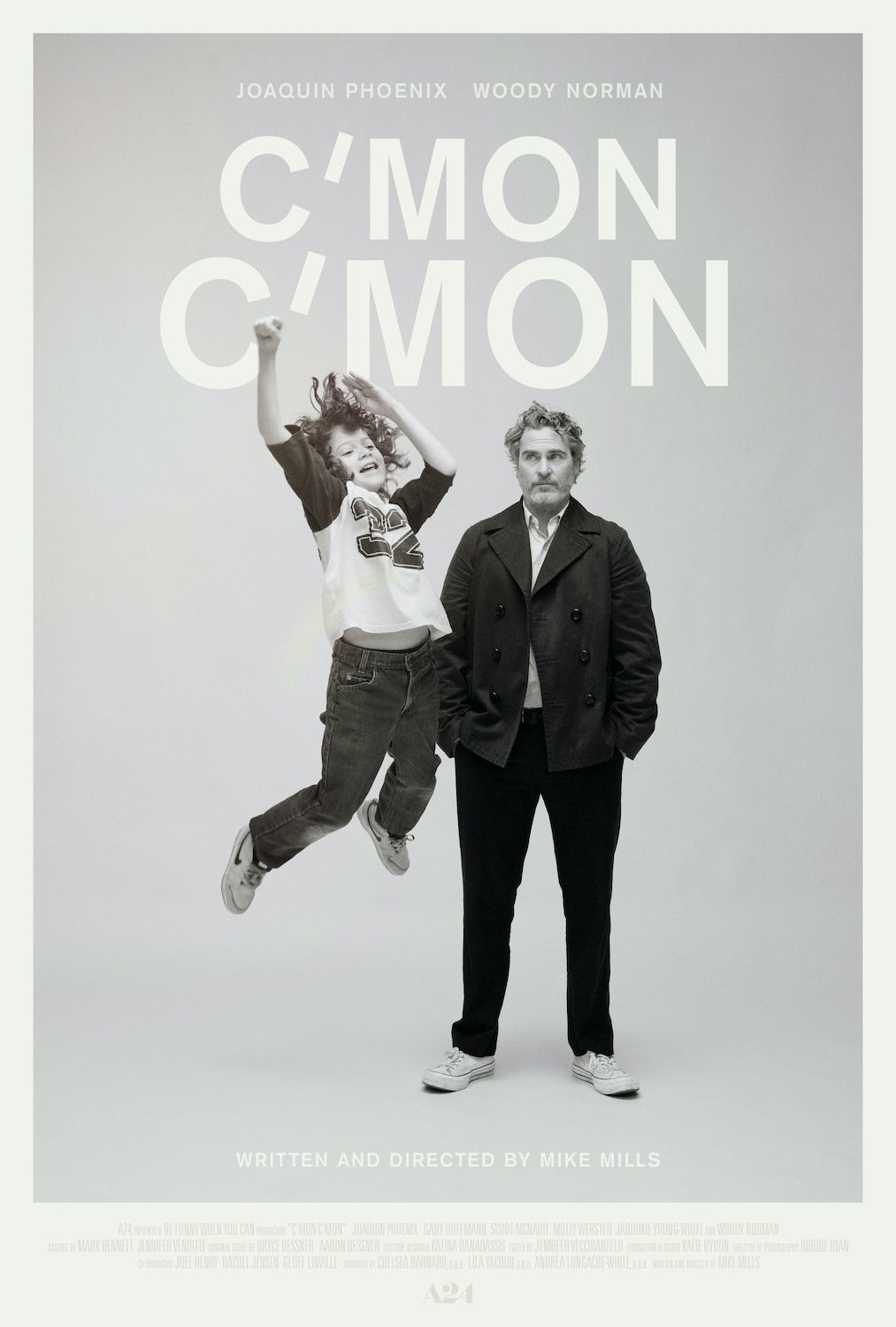 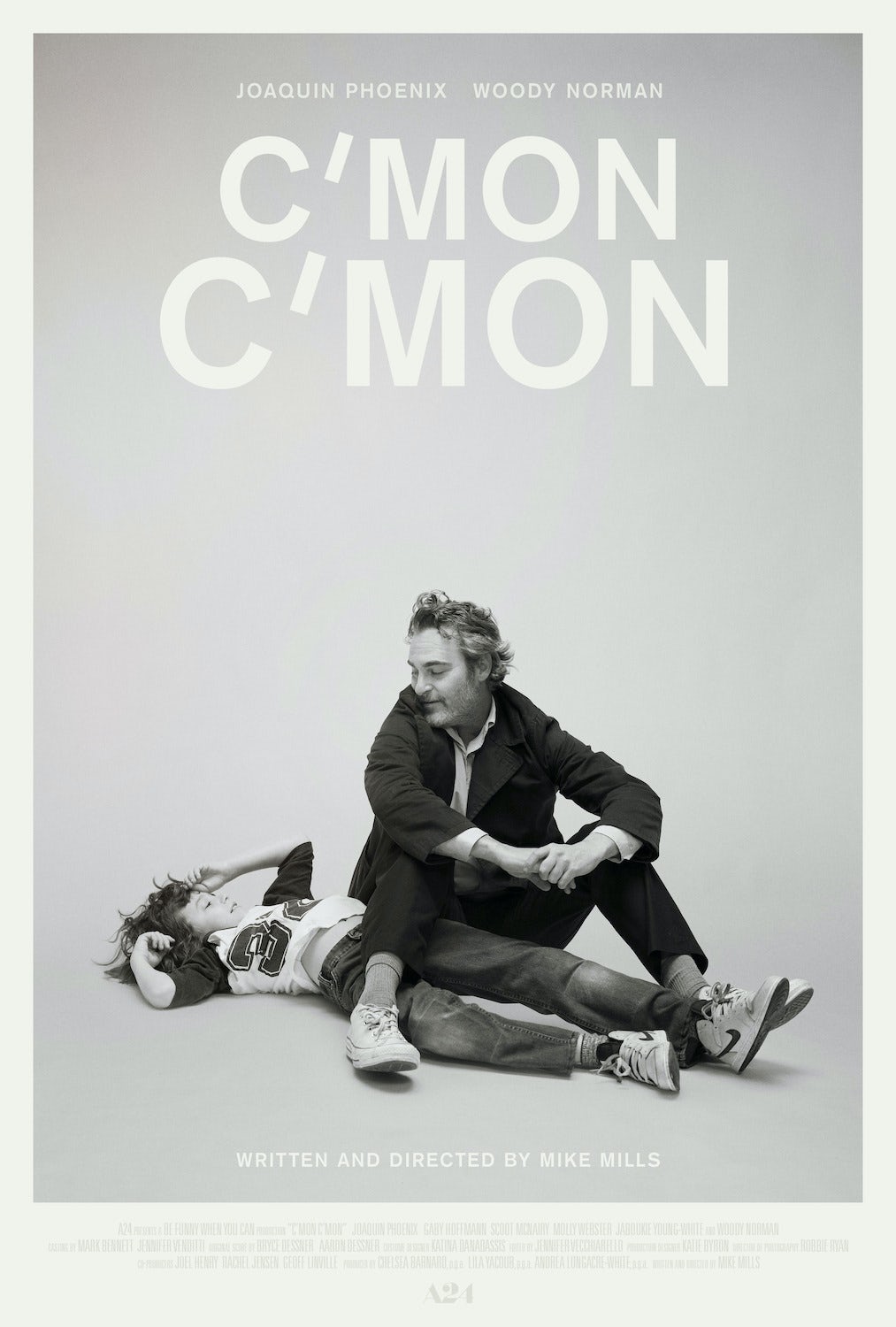 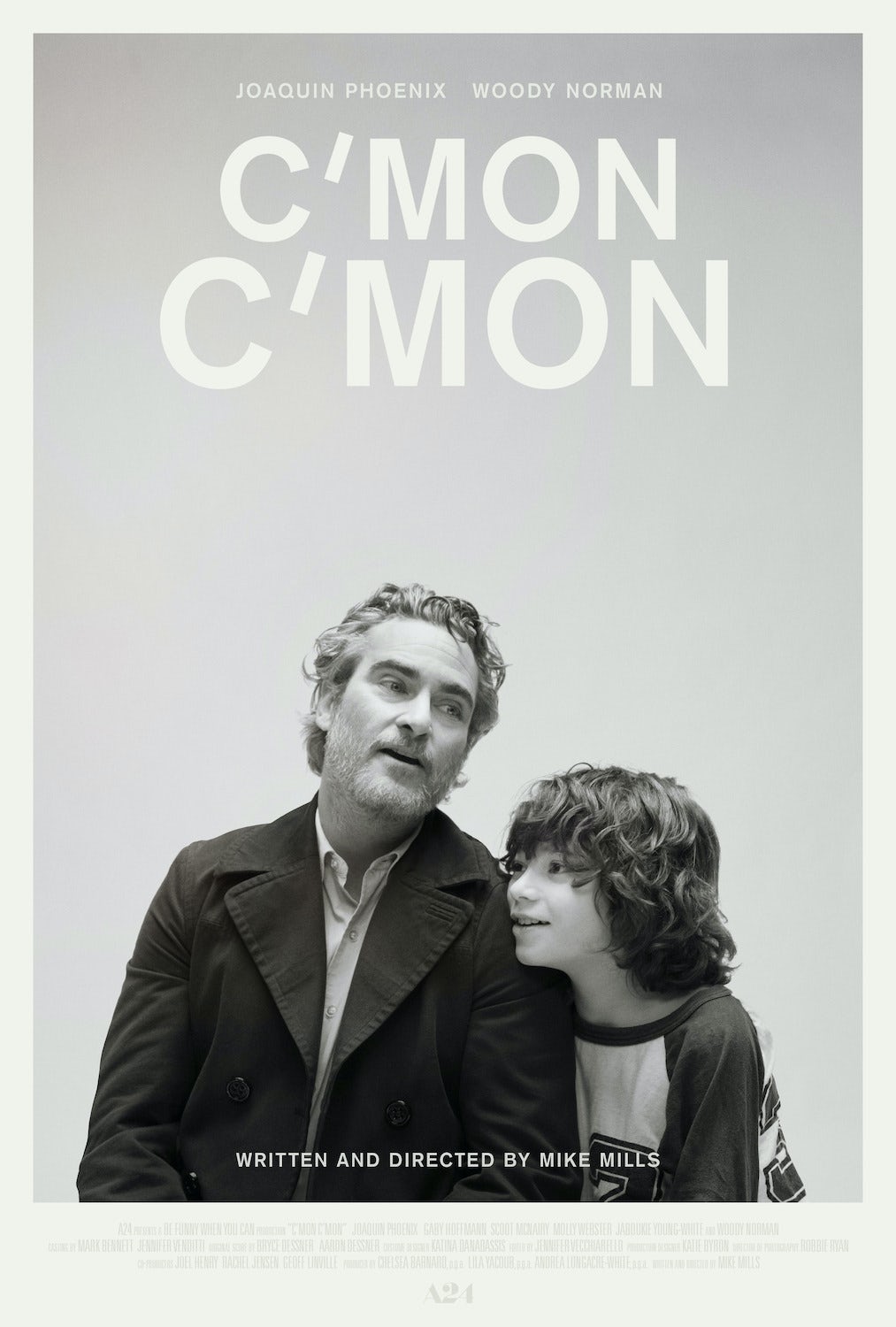 C’mon C’mon; Design: Mike Mills
Few films would benefit from the simplicity and frolickry of unadorned promotional studio shots (although imagine if Lamb had tried it), but this trio of minimalist posters perfectly captures the goofing-about, uncle-nephew energy of Mike Mills’ film. Refreshingly simple and joyous. 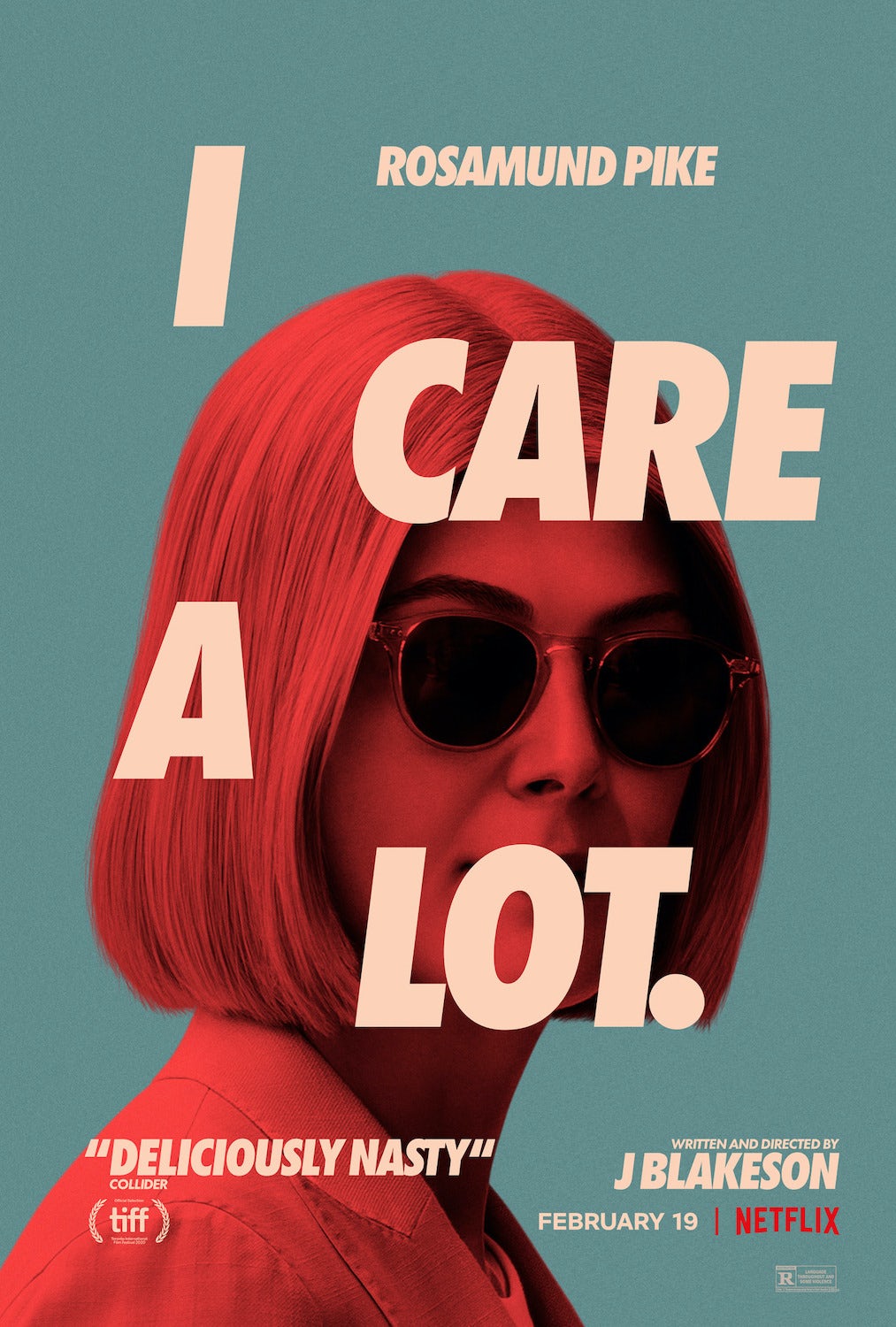 I Care a Lot; Design: Empire Design
As the idea of what a poster actually is continues to evolve, it’s interesting to see designers gearing them more towards online use than print. Empire Design’s poster for I Care A Lot is striking at even the thumbnail-iest of sizes, keeping copy brief but bold, with an image that makes full use of Rosamund Pike’s shaded gaze and sinister Gone Girl-evoking bob. 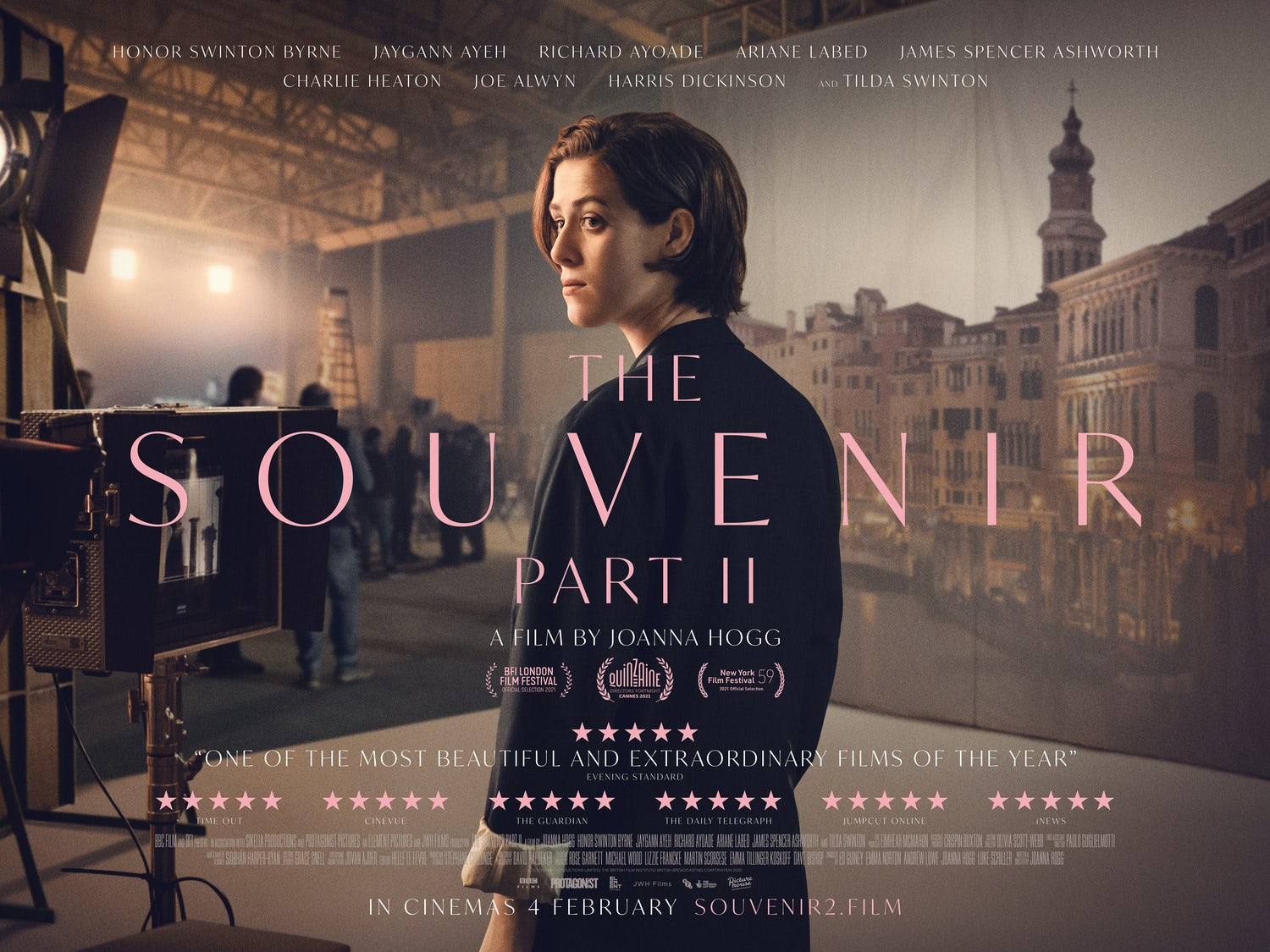 The Souvenir: Part II; Design: Intermission
Not all posters have the luxury of such brevity though. For Joanna Hogg’s semi-autobiographical sequel, Intermission has produced an elegant composition of image – neatly placing Honor Swinton Byrne at the intersection of fact and fiction – and text, of which there is a lot. The end result looks effortless, but there is an incredible amount of finesse to this balancing act. 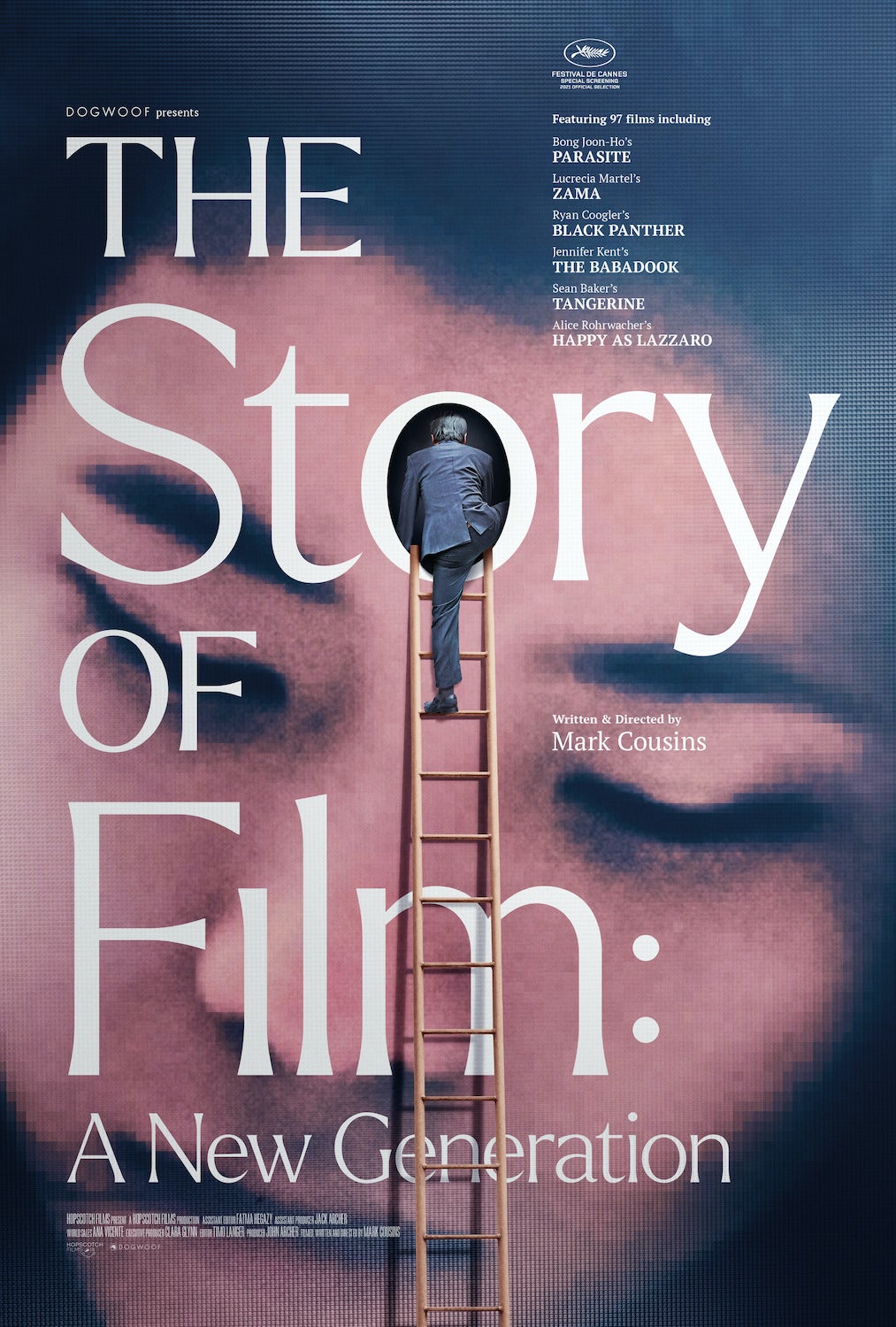 The Story of Film: A New Generation; Design: Intermission
Another smartly-executed copy-heavy poster, this time integrating text and image in an unexpected way, as Mark Cousins literally climbs though the story and into the pixels of a film for this follow top to his 2011 documentary series. 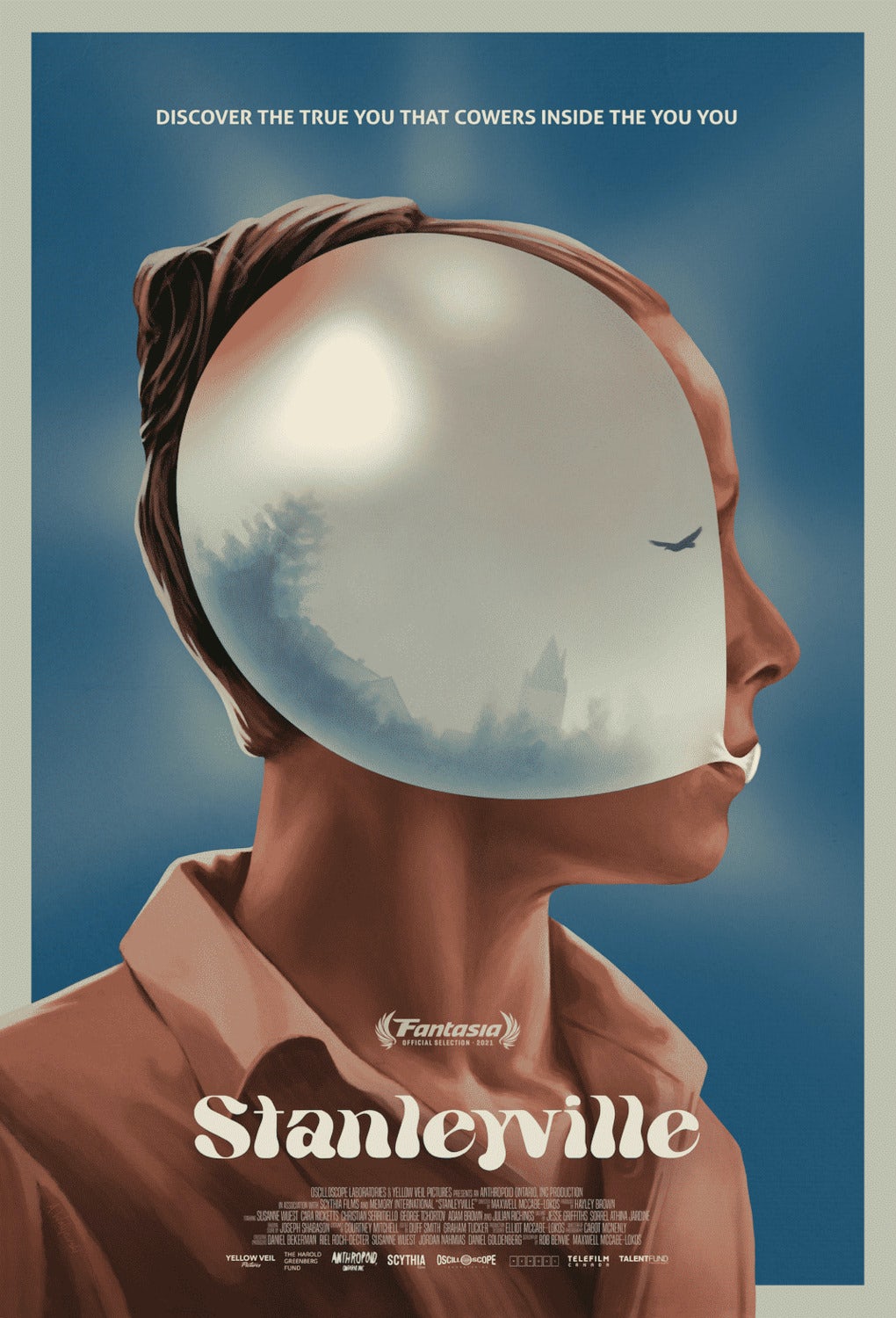 Stanleyville; Design: Aleksander Walijewski
Continuing the painterly tradition of Polish film poster art (originating in the Communist era, when film distributors were unable to get hold of official publicity material), Aleksander Walijewski has been producing some incredible, uncanny portraits in recent years – most recently this eerie treatment for Maxwell McCabe-Lokos’s Stanleyville. 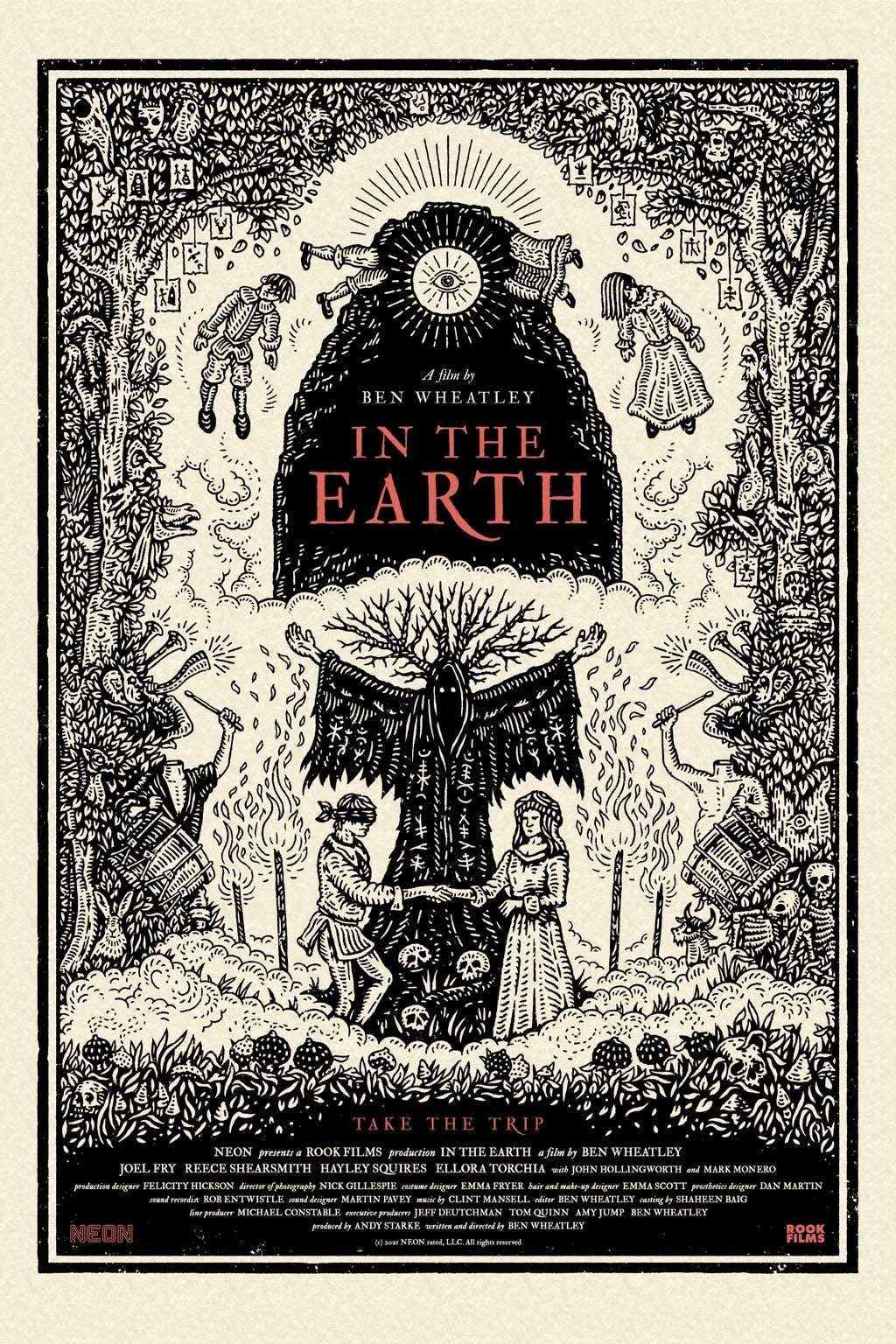 In the Earth; Design: Richard Wells
One of the UK’s most prolific directors, Ben Wheatley is apparently a magnet for great design – think High Rise’s recursive triangles or Free Fire‘s nothing-but-arms poster – and that trend continues here, with film and TV graphic designer Richard Wells supplementing the day job by applying his signature linocut style to fantastic effect. 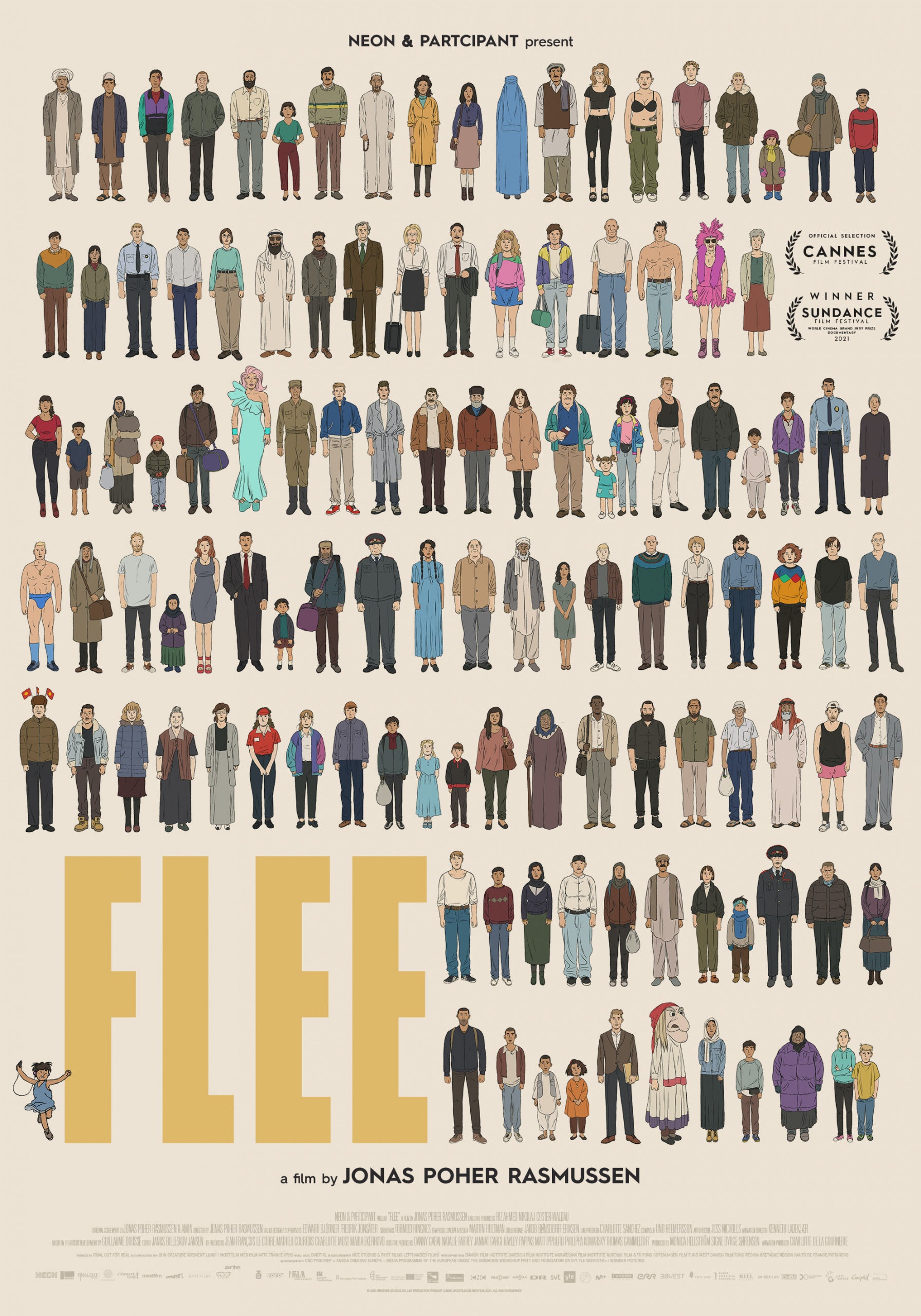 Flee; Illustrations by Mikkel Sommer and Kenneth Ladekjaer; art direction by Martin Hultman
There’s lots of obscured and disrupted faces in this list, but the poster for Jonas Poher Rasmussen’s animated documentary about one man’s flight from Afghanistan to Denmark goes completely the other way, throwing the entire cast of characters onto the page. It’s one man’s story, but he is one of many.

Daniel Benneworth-Gray is a freelance designer based in York; danielgray.com; @gray