For centuries, infographics have served the various needs of designers, statisticians, researchers, scholars, teachers, and just about everyone between in some way or another. These steep demands aren’t lost on Sandra Rendgen, author of The History of Information Graphics, a new tome published by Taschen. Rendgen begins the book by displaying a version of the Penrose triangle – an ‘impossible object’ – designed by Italian art director Francesco Franchi, intended to evoke the countless considerations that go into infographics. An “impossibility in its purest form,” as he jokingly describes it.

Interest in infographics continues to grow, particularly in the data age as visualisation takes on a far more prominent role, and the digital tools used to create infographics become ever more advanced. However, Rendgen points out that, “we stand on the shoulders of giants”.

“Visually encoding and saving information, in order to make it easier to work with and to transmit it to others, is an age-old practice,” she explains. “We know examples from ancient societies – like Mesopotamian abacuses in cuneiform or maps chiseled into stone – as well as from contemporary cultures around the world.”

Naturally, procuring these early forms of information visualisation comes with an abundance of practical challenges. Instead, the book sets off from the Middle Ages when theology, astrology, anatomy and chronology were themes. It was towards the end of this era, around the mid-15th century, that printing emerged, bringing with it a huge shift in means of production.

As world exploration (and indeed colonisation) gained momentum in the 15th century, so too did cartography, which “became a recording system that stored and visualised new discoveries. Cartographers collected the reports of seafarers and the data from logbooks into maps, and together these various individual observations composed a new concept of the world,” Rendgen writes. This saw the emergence of systemised atlases featuring maps, “giving rise to the development of geography as its own science”.

Infographics continued to evolve throughout subsequent centuries. The 1700s saw Denis Diderot make an ambitious attempt to present all of the factions of human knowledge, while William Playfair produced forms of data graphics that are still widely used today, including the line graph, bar chart, and pie chart.

Rendgen’s book illustrates the trajectory of infographics over time, with the use of colour becoming more prominent due to technological advancements in colour printing. With time, colour infographics would eventually be published in illustrated magazines, science books, and wall charts, taking up residence in schools, exhibitions and business environments. Moving from a scientific domain into a more public sphere brought with it a change in who produces infographics, with designers and journalists now major contributors to the field.

The book ceases rather abruptly on the cusp of the 21st century. Perhaps any further would have been deemed too recent to sit comfortably in a retrospective tome, however it would have been interesting to uncover some of the processes and trends that surfaced shortly after the turn of the millennium. Nonetheless, the History of Information Graphics gives an otherwise comprehensive insight into the formative years of information visualisation and offers no shortage of inspiration. 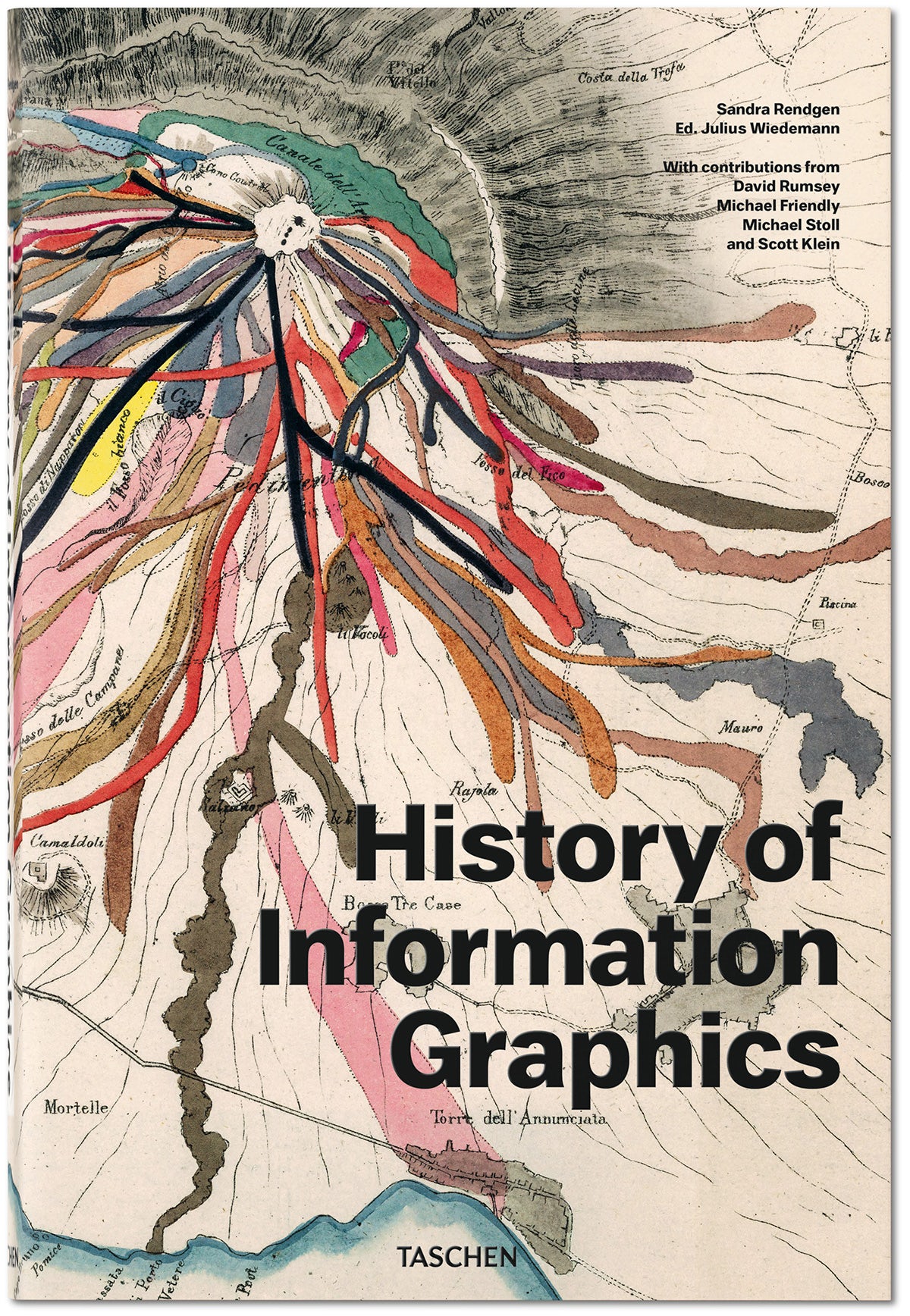 The History of Information Graphics is published by Taschen and is out now; taschen.com