We’re all comfortably attuned now to the idea of flexible working, whether that means skipping a couple of lunch hours so we can take Friday afternoon off or keeping in touch with the office via a laptop perched on the kitchen table. It’s difficult to argue against the concept as a business model. Multiple studies have concluded that productivity goes up, staff turnover goes down and employee wellbeing enjoys a significant uptick once we’re freed from the shackles of nine-to-five presenteeism.

But with this rise in flexible working comes a need to rethink the spaces we work in. With more of us now using co-working spaces or splitting our time between home and the office, the idea of open plan rooms filled with rows of facing desks feels a little out of date.

Now, a new wave of products are helping shape our workday future. Earlier this year, Samsung launched the Space monitor a functional, flexi design complete with moveable arm that can clamp on to the back of your desk. Height and angles can be adjusted, with the screen (available in 27 and 32inch sizes) pulled towards you or pushed flat back against the wall. According to Samsung, it can save up to 40 per cent of desk space. 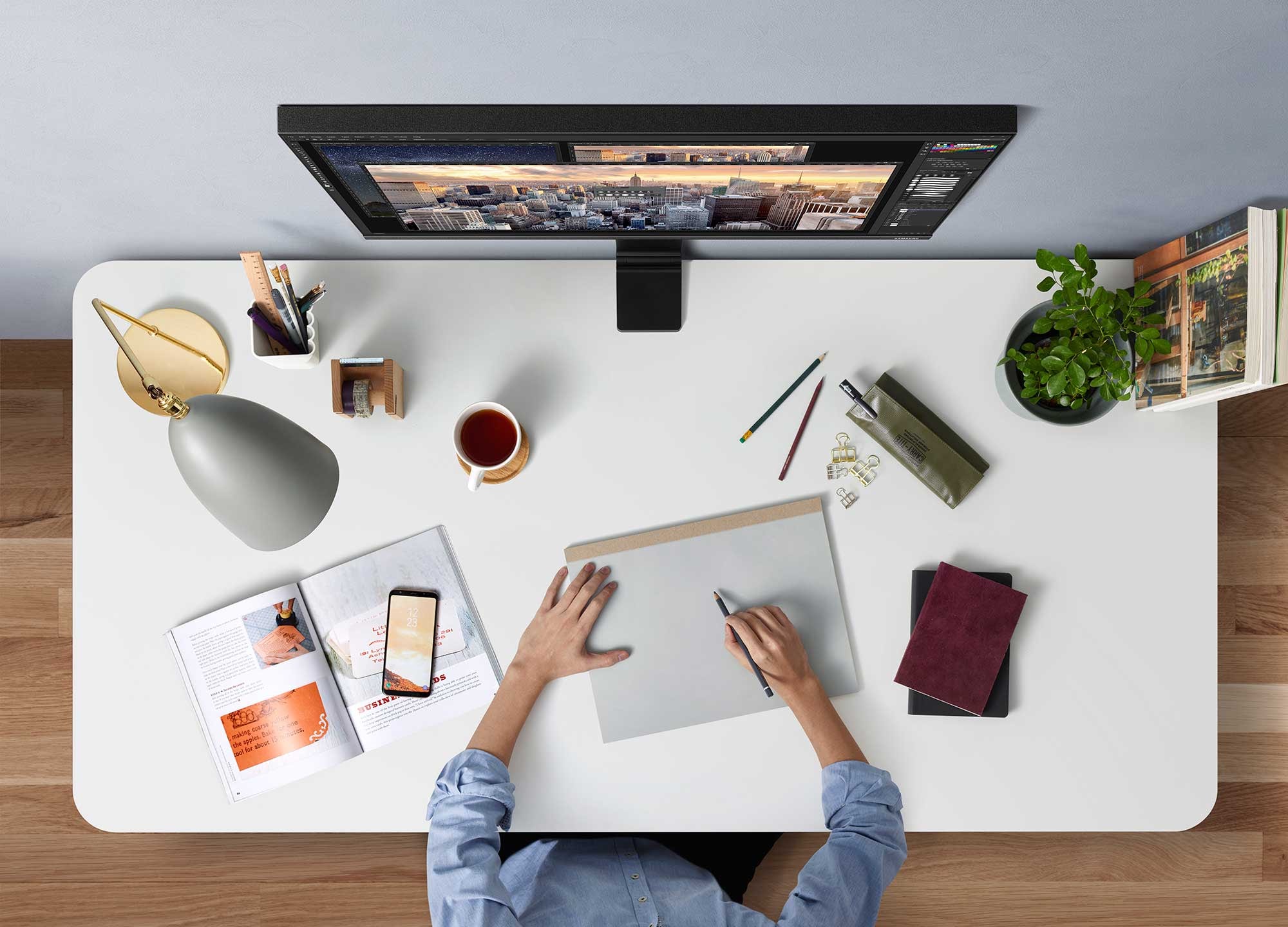 “The rise of shared working spaces, the trend of flexible working both in the office and at home, and the desire for design-oriented technology among young working professionals all drove the creation of the Space,” says Samsung. “Creative professionals for example need a larger screen that offers high resolution … while also being able to clear space to work off-screen too.”

This isn’t just limited to tech: we want our workspaces to reflect a new sense of openness and flexible thinking and it’s no longer enough just to have a bowl of fruit within easy reach, a pot of artisanal coffee brewing in the background or holding the occasional bring-your-dog-to-work days. Employees are looking for an environment that eases their transition from living space to work place as smoothly as possible and in turn, designers are seeking ways to create more diverse work settings within traditional spaces. We’re seeing a change in the way people position themselves in a workspace

Paul Gulati, director of Universal Design Studio, the London-based architecture and interior design practise whose client list includes the British Library and IBM, says that designers are increasingly looking to the hospitality industry for inspiration.

“We’re seeing a change in the way people position themselves in a workspace. We’ve become so used to doing business in hotel lobbies or cafes that there’s now an overlap with office design, where you see some of the aesthetics or typologies of seating and meeting spaces. It’s gone in the other direction as well; hotels have started to take on that requirement for creating different types of spaces where people might meet in different ways. Traditionally separate typologies have started to merge to some degree.”

Upholstered café booths are now being reimagined as multi–functional spaces to work, have meetings or indeed eat your lunch in. Forget swivel chairs and cluttered desks filled with overflowing in trays – now, it’s about having furniture that can flex.

Vitra’s Soft Work range is a case in point. Aware that the traditional desk’s days are numbered, the Swiss company’s seating system has been created specifically for a working culture where people tend to sit side-by-side, sharing info on a tablet or laptop in a relaxed space to bounce ideas around or hang out in. Mobile tables, moveable panels and partition screens bring added versatility could easily sit in a domestic setting as much as a work one. 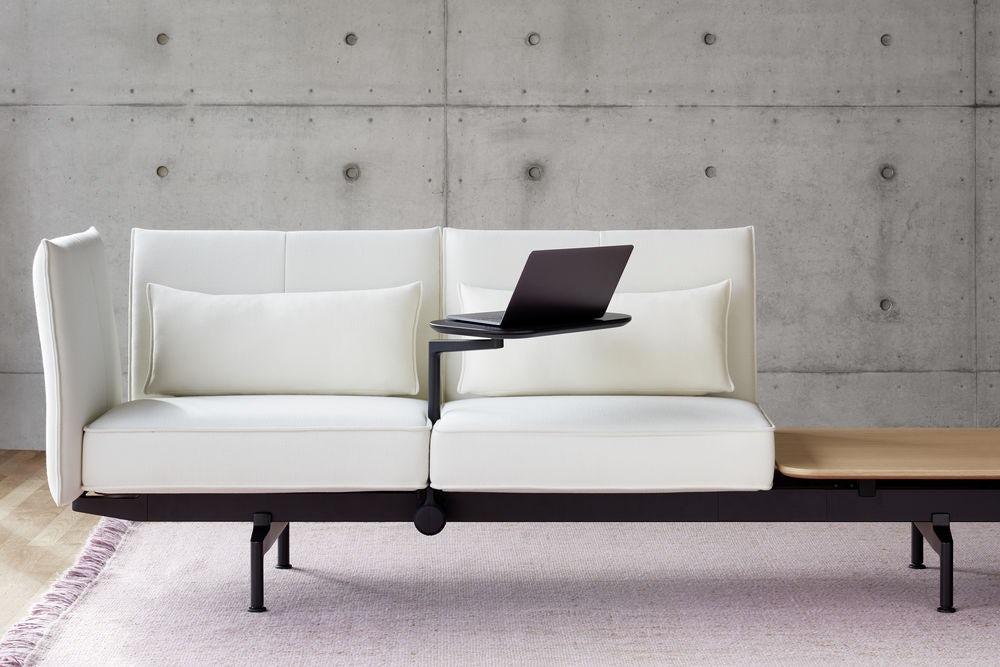 Of course, saying goodbye to your beloved desk can be a traumatic event for some. “There’s always a little bit of fear. People say,‘but I need my desk…'” says Nicki Mc Birney, a Senior Designer at Spacelab, specialists in creating uncluttered interiors for the likes of Virgin and the Royal College of Nursing. “Obviously there are behavioural habits that people find tricky to change, but they tend to quickly adapt and soon see the benefits.”

More than that, Mc Birney believes that sitting comfortably promotes a new spirit of teamwork. “Creating these co-working spaces encourages collaborations and that helps staff development and networking and brings down that traditional hierarchy a little bit. People seem to be a lot more willing to pass on and share their skills, rather than be a bit precious about them.”

Amie Bosson, Mc Birney’s fellow designer at Spacelab, agrees that products in tomorrow’s workplaces need to aim for that sweet spot sitting between bespoke comfort zone and creative hub. “Workspaces are becoming a lot less sterile and functional, they’re becoming a lot more humanised, and product designs are less corporate now. These are places where people want to go and spend some quality time in. And people are more open to this idea of being sponges, of moving around and learning different things from different people, whether that’s within their immediate office or in a co-working space. Skills are becoming a lot more transferable as well. A lot of our clients want a set–up that encourages that sort of movement throughout the day. They like the idea of having alternative workplaces around the office.”

Space is key to all this: how we use it, how we can alter it and how we can save it (and with that, cut down on costly overheads). Being able to transform your wider working environment at short notice is an essential skill. One recent big development has been the introduction of products that can create space within existing spaces, like a freestanding room that operates as close as possible to a conventional office fit-out, but remains free of mechanical systems, lighting and cables.

Philippe Paré, Design Director and Principal at design firm Gensler, oversaw the launch of Gensler’s Atelier system at this year’s Salone del Mobil in Milan. Created with Italian industrial and office design group Fantoni, it’s a furniture system that pares down a workstation to its most elemental features, with all the components on casters, allowing the user to completely change their surroundings with just a few adjustments. The Atelier is a natural design progression from Gensler’s innovative ‘Basecamp’ flexible workspace concept, which operated along the lines of a pop-up office and quickly made the old temporary partitions of yore obsolete.

Philippe Paré, Design Director and Principal at design firm Gensler, oversaw the launch of Gensler’s Atelier system at this year’s Salone del Mobil in Milan. Created with Italian industrial and office design group Fantoni, it’s a furniture system that pares down a workstation to its most elemental features, with all the components on casters, allowing the user to completely change their surroundings with just a few adjustments. The Atelier is a natural design progression from Gensler’s innovative ‘Basecamp’ flexible workspace concept, which operated along the lines of a pop-up office and quickly made the old temporary partitions of yore obsolete.

Whatever our office needs are ten years from now, Paré believes that good workspace design relies on thinking not just about practical concerns but about how our workspace makes us feel. “Ultimately human beings respond to their environment, so as much as technology liberates us, we still need to respond to some very primal needs that have to do with sense of place. The right products can help put you in the right mood, in a setting better suited to your personality type. It’s not just what things look like, it’s about what they feel like.”

It could even be that, with the introduction of new tech like Samsung’s Space Monitor, Vitra’s stylish soft furnishings and Gensler and Fantoni’s reimagining of temp workspaces, we end up spending more time in the office, not less. Hmmm – don’t suppose there’s any of that coffee left is there>?