The fall of the Berlin Wall in November 1989 is remembered as one of the defining moments of the 20th Century, acting as the precursor to the reunification of East and West Germany in 1990, and in turn the thawing of Cold War tensions across Europe.

Widely credited as the first artist to start illegally painting the wall in the early 80s, Thierry Noir’s colourful characters became a symbol of hope and resistance for Berliners and the wider world at the height of the Cold War.

Since the end of the war, Noir’s charming, cartoon-like faces have spread to cities across the globe and inspired a new generation of creatives to view street art as a tool for change.

Born and bred in east London, STIK has been using his trademark stick figure murals to comment on issues ranging from the destruction of social housing to homelessness since the early noughties.

Working on original Berlin Wall pieces last month with @stikstudio to mark the 30th anniversary of the fall of the Berlin Wall 1989-2019 with @imperialwarmuseums. Official unveiling of the project at 11AM on Saturday 9 November at Imperial War Museum London

The two street artists have been friends since 2012 after meeting in Berlin (where Noir still lives), but the 30th anniversary of the fall of the wall fittingly marks their first creative collaboration.

Currently on display at the Imperial War Museum in London, WALL sees two pieces of the original wall recovered from Berlin and painted by Noir and STIK in their signature styles. The installation also sits opposite another Berlin Wall artwork, created by East German artist INDIANO at the time of the fall of the wall, which bears the message ‘Change Your Life’. 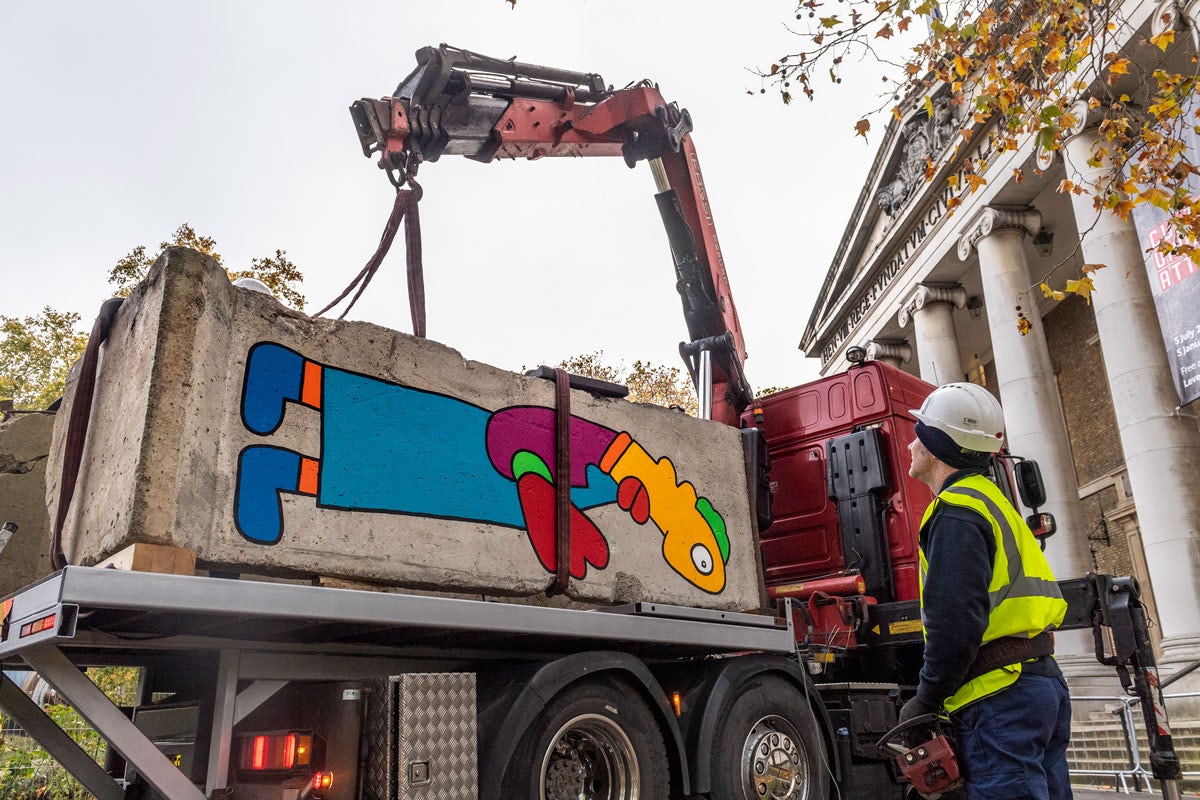 Speaking to CR about the project last month, Noir suggested that the lessons we can take away from the Berlin Wall and what it symbolised are arguably more relevant today, on its 30th anniversary, than ever before.

“There are more walls now than there were 30 years ago, and the new worldmakers [have just] changed the name. It’s not a wall anymore, it’s a separation border, a peace line, a green line,” he said. “My heads are a symbol of the new freedom in Europe, trying to say ‘do not repeat the mistakes of your parents’ – a small message.”

The fall of the Berlin Wall was one of the defining moments of the 20th century. IWM is marking the 30th anniversary of this iconic event by installing a new artwork by renowned street artists Thierry Noir and STIK outside IWM London. Here is your first glimpse of the new piece – see it at IWM London from 5 November.