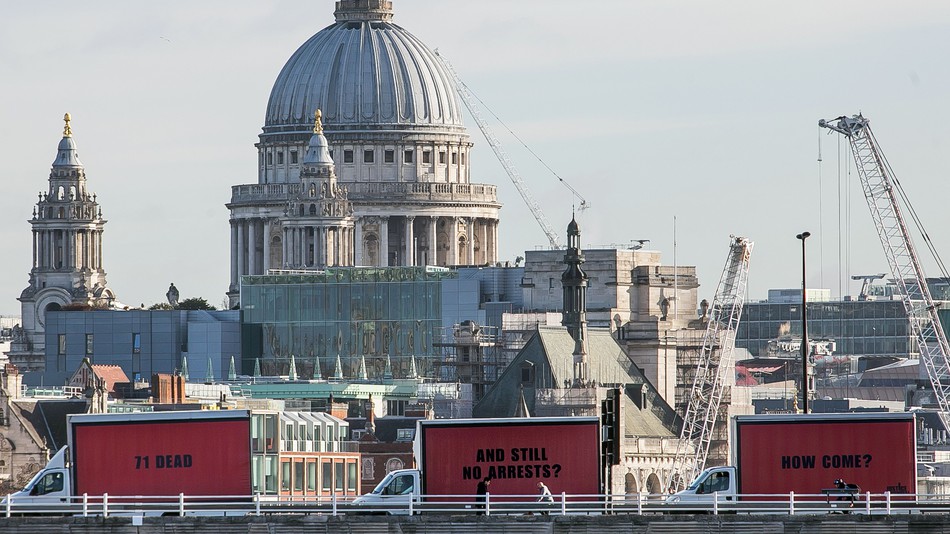 It is now eight months since a fire ripped through Grenfell Tower in West London, killing 71 people and leaving hundreds without a home.

An inquiry into the fire is still ongoing but as yet no arrests have been made and many of the building’s former residents are still awaiting permanent housing.

To remind people of the tragedy – and the need to seek justice for those affected – community organisation Justice 4 Grenfell has been driving three billboards around London that read: “71 deaths. No arrest. How come?” 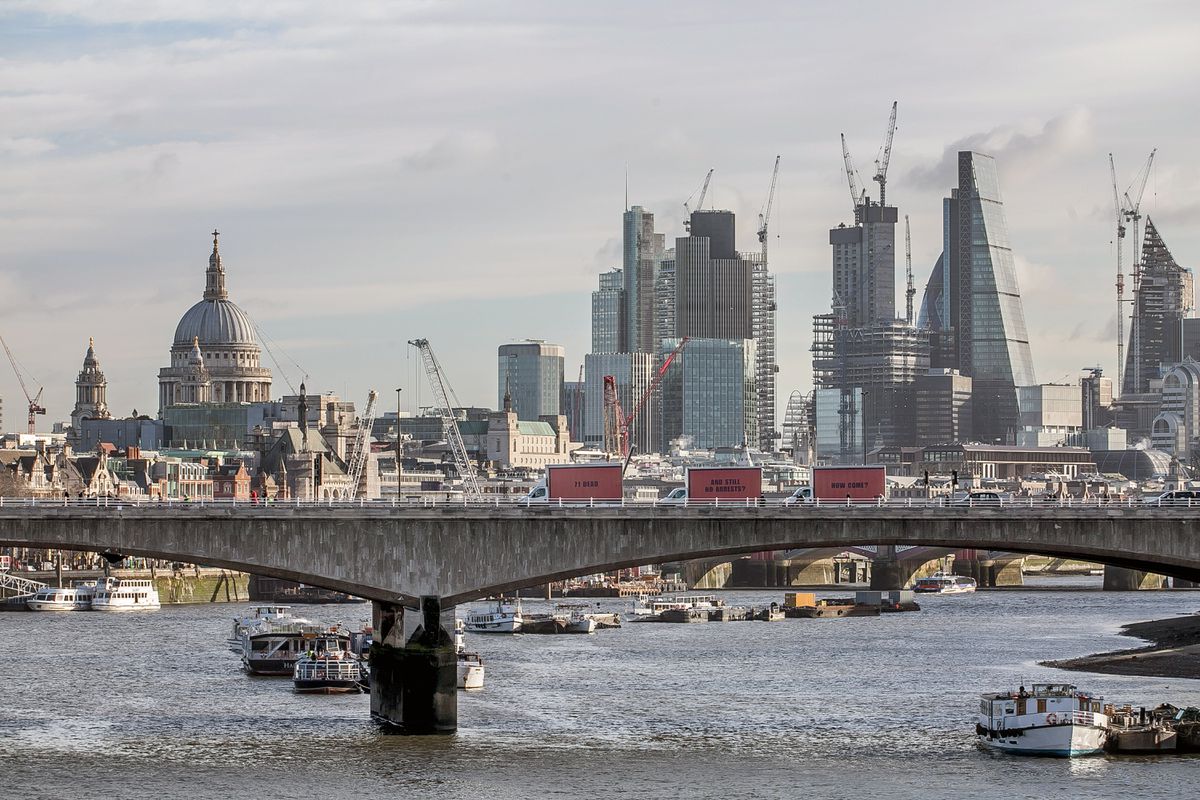 The billboards were created by BBH Labs and inspired by the Oscar-nominated film Three Billboards Outside Ebbing, Missouri – about a mother who hires ad space to raise awareness about her daughter’s unsolved murder. (The billboards in the film feature the same black-and-red design and read: “Raped while dying. And still no arrests. How come, Chief Willoughby?”) 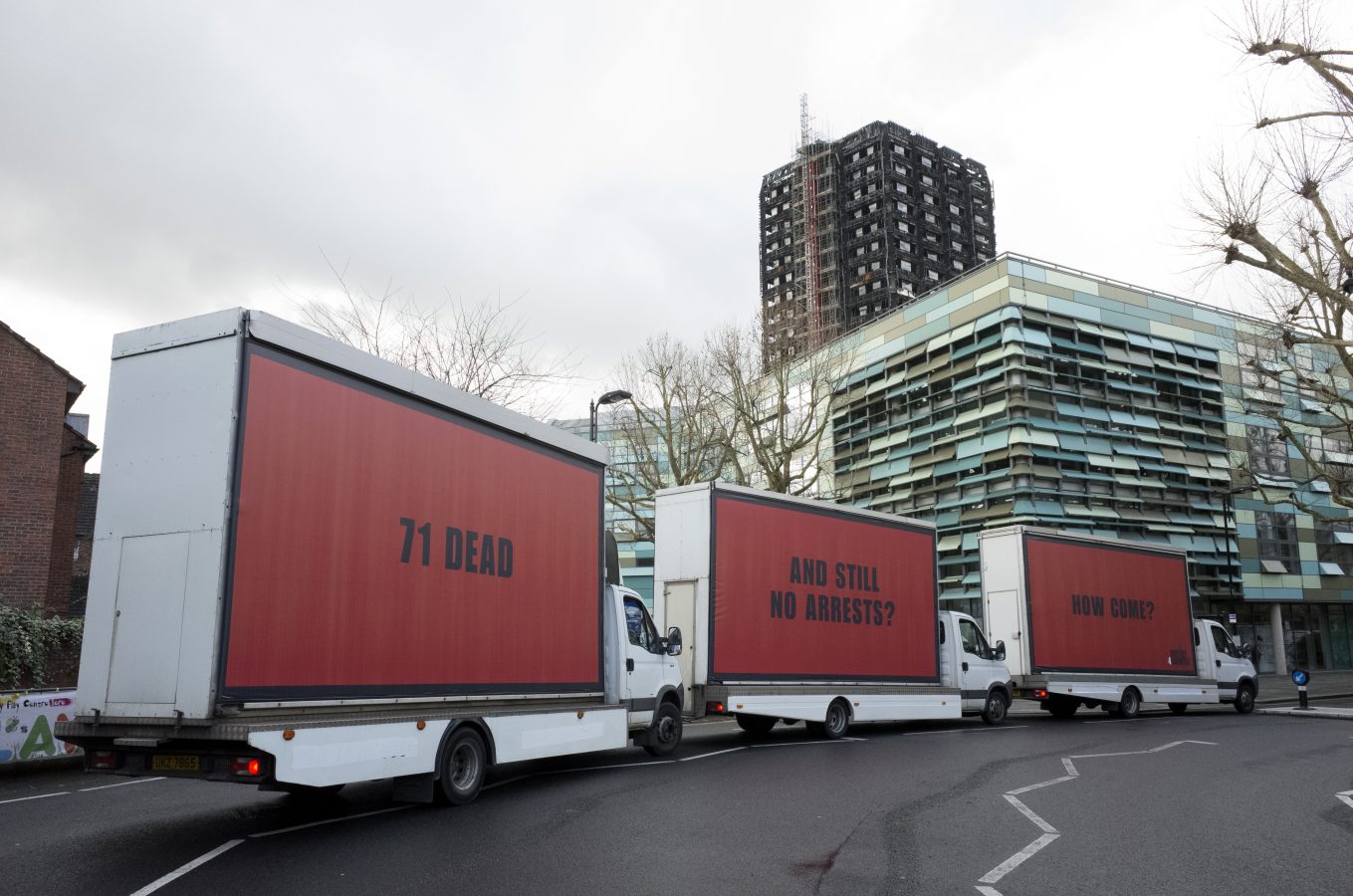 Billboards were driven past St Paul’s and the House of Parliament. Writing on its website, Justice 4 Grenfell said: “These three billboards are here to keep this tragedy in the national conscience, to make our voices heard.”

Many buildings around the UK are still awaiting replacement cladding (the fire at Grenfell is believed to have spread rapidly through the building as a result of cladding which contained a highly flammable material) and local councils have claimed that requests for money to fund refurbishments are not being met.

Listen to all our voices now; we demand #Justice4Grenfell

The billboards have certainly got people talking: the campaign has been covered in local as well as national press and Justice 4 Grenfell’s tweet about it has received several thousand retweets.

The inquiry into Grenfell is far from over (making any arrests at this stage unlikely), but billboards may put some extra pressure on the government to react to concerns over other buildings. With the Grenfell tragedy no longer front page news, the campaign provides a powerful reminder that residents are still awaiting answers – and that Justice 4 Grenfell has not given up on its pledge to hold anyone whose negligence might have contributed to the tragedy to account.