Often, advertising is about the one big idea, but Three’s Real 5G ad bucks that trend, making it instead about dozens of small ones. The film, directed by Ian Pons Jewell, transports viewers into a future UK, where 5G reigns supreme, Tinder has gone holographic and Greggs is delivered down a remote-controlled chute.

“We wanted to create a future that was recognisable, but also like nothing you’ve ever seen before,” says Creative Adam Newby. “Even though everything’s a bit absurd, and a vision of the future, it’s believable.”

According to Newby, the ad was a mix of visual effects created by The Mill, and real-life production design – for example, the futuristic airplane and newsagents. A few extra tricks, such as rigging a camera to resemble a giant earhole, also helped achieve some of the ad’s weirder moments.

Thanks to its mix of digital and physical craft, the film is absolutely packed to the gills with details, and it’s only on repeated viewings that you’ll catch them all – such as the plane named Spacey McSpaceface, or the floating triple-decker bus. There’s definitely a few Black Mirror-esque elements as well, including the real-time face filters or the mutant finger-headphone hybrid.

Newby says that creating the ad was a race to stay ahead of what was going on in the real world – for example, during the process a news story emerged about a vlogger who’d inadvertently unmasked herself, when her face filter glitched and revealed her as a middle-aged mum and not the 20-year-old she’d claimed to be. In some cases, he says, the creative work turned out to be weirdly prescient, with some of the future car designs ending up strangely similar to the Tesla Cybertruck.

And while we all love a smooth, seamless, white-walls-and-neon-lights vision of the future, Newby says that was precisely what W+K wanted to avoid. 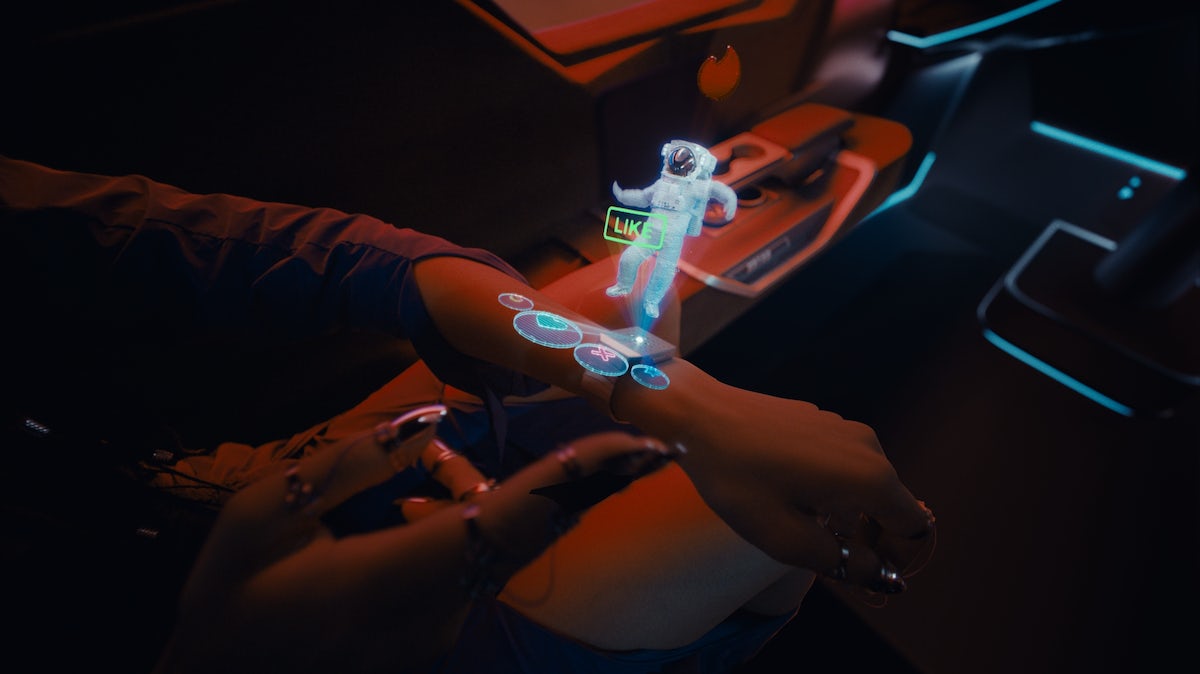 “These positive futures and clean worlds that you typically see in adverts tend to be boring,” he says. “There’s something about these cyberpunk, Matrix futures that are sort of terrible but fascinating.

“Our goal was to create a British future that was interesting. We’re not saying this is a perfect world, but it’s one we recognise. I’d love to see a cyborg England team win the World Cup.”