Tom Hingston and Paul Smith’s new capsule collection is a cut above most band merchandise. There are no cotton t-shirts with badly printed logos. Instead, Hingston and Paul Smith’s design team have worked with Nick Cave and the Chemical Brothers to create a luxury clothing range inspired by Hingston’s album art designs for the artists. He has also worked with Massive Attack’s Robert Del Naja to customise vintage leather jackets with a design inspired by the band’s album Heligoland.

The collection includes a blue velour bomber jacket embroidered with a mermaid icon from Nick Cave and the Bad Seeds’ Lovely Creatures box set and a mohair jumper featuring the graphic pattern from the cover of the Chemical Brothers’ album Born in the Echoes. Clothes are on sale at Paul Smith’s Albemarle Street store in central London and online at paulsmith.com.

The collection was launched to mark Hingston Studio‘s 20th anniversary. Hingston is perhaps best known for his album covers and art directed some of the most memorable sleeves of the past 20 years – from Massive Attack’s Mezzanine to Grace Jones’ Hurricane.

The collaboration with Paul Smith came out of a conversation between Smith and Hingston – who are good friends – about the challenges of creating high quality music merchandise.

“Paul said to me, ‘do you ever get involved in band merchandise?’ And it’s an ongoing conversation that we have with so many artists,” explains Hingston. 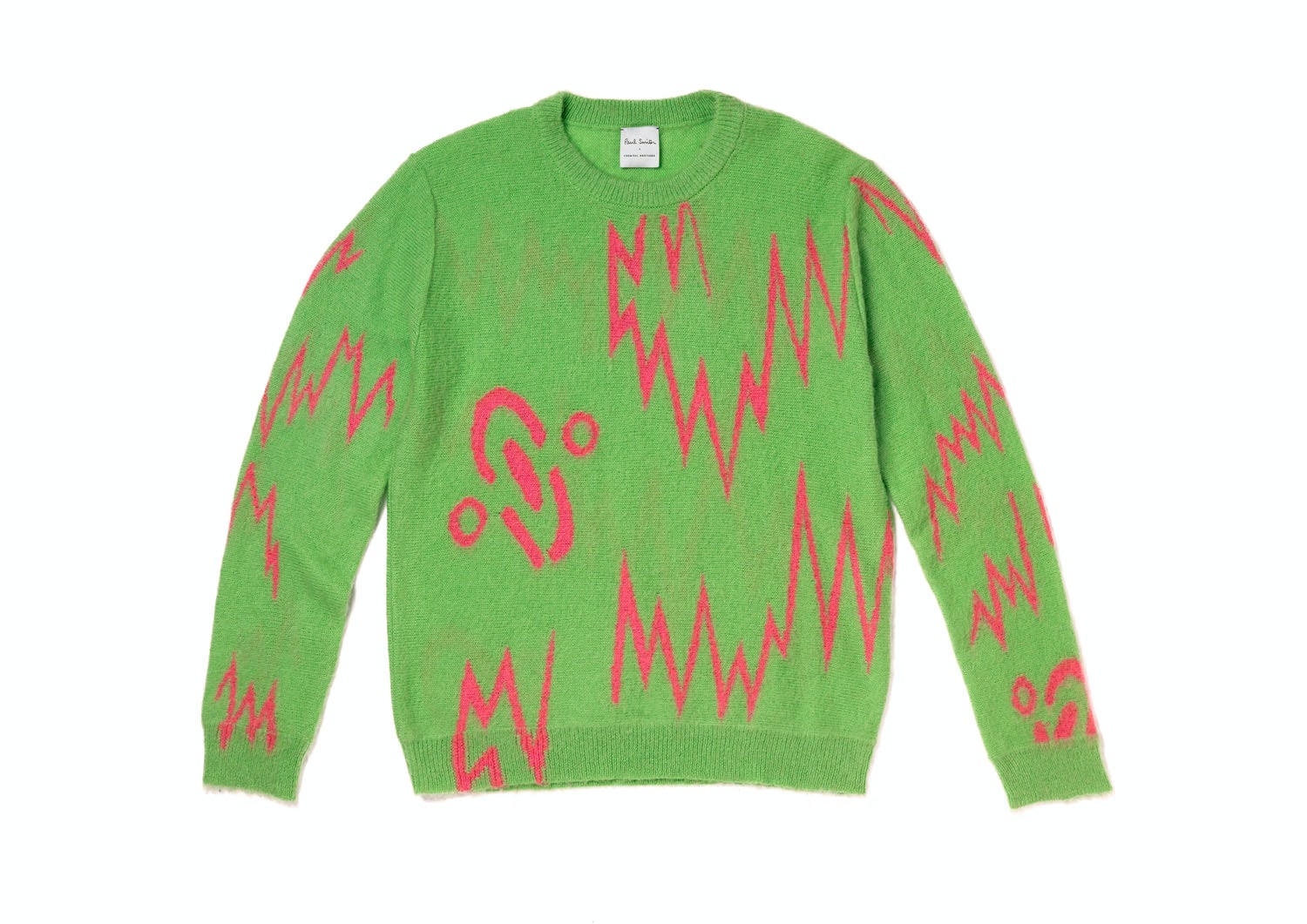 “We don’t really get involved with it because there aren’t many companies out there who would manufacture products to a standard that we’re happy with. It’s always really frustrating because you and the artist will come up with all these brilliant ideas and then they’re never really executed properly because it’s always about volume and not production values. So that’s how it all got started. We said, ‘wouldn’t it be great if we were to produce a super limited edition, high end set of band merchandise?’

“It was also a nice way of going back through the [Hingston Studio] archive: rather than just [displaying] the works as they were originally, it’s about re-presenting and reinterpreting them,” he adds.

The resurgence of vinyl has shown a high demand for tactile music products. Deluxe box sets are commonplace but luxury merchandise is not – yet Hingston believes there is an appetite for well made and well-designed items.

“Especially in the digital age, you have to give people a reason to want the physical, so that means [an item] needs to feel really special in all of its production values. Bands want that and the audience wants that – and it’s kind of foolish to think they don’t in a way,” he says. “Fans are discerning but a lot of the merch companies really underestimate that. If you had high end products or something with much higher production values, I think fans would snap them up.” 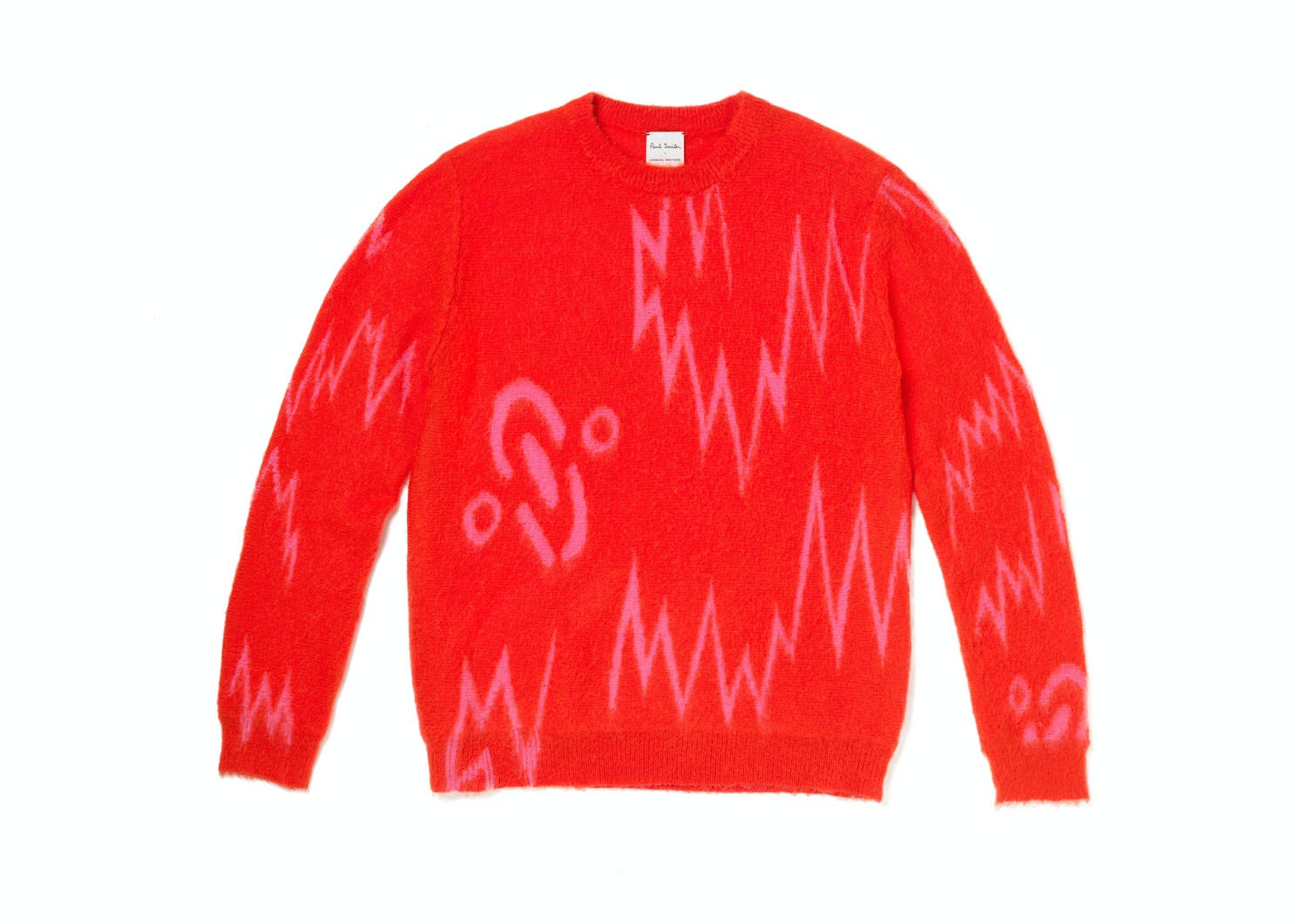 This is surely true for musicians like Massive Attack, Nick Cave and the Chemical Brothers, who have a devoted following and are known for working with artists to produce exciting visual creative.

Hingston and Paul Smith’s design team started work on the collection around 18 months ago: “There was a lot of back and forth. Conversations take time – particularly if you’re involving musicians because they’re often in the studio making an album or on tour – so you have to build in enough time [to account for that]. The whole idea of doing this was that we made something really special and it wasn’t rushed,” says Hingston.

The bomber jacket went through several iterations. “A lot of that was just getting the colours right,” explains Hingston. The team experimented with using a range of icons from the Lovely Creatures box set on the front of the jacket before opting for a mermaid (a “more neutral” design than some of the other symbols such as an electric chair). They also tried out a range of colour combinations for the jacket’s lining. “In the end, the one that worked best was the closest to the original [on the box set],” adds Hingston. 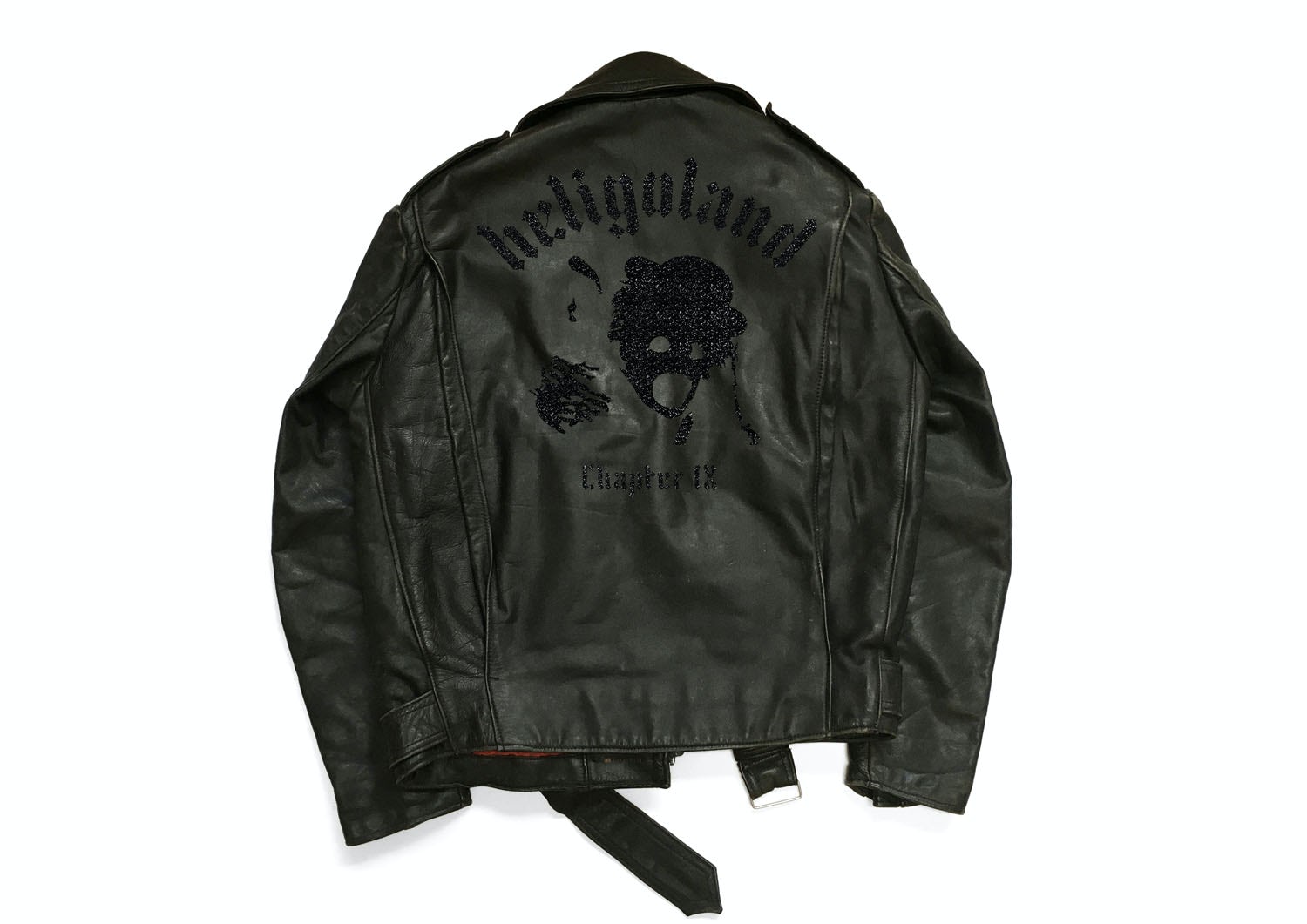 Cave offered feedback throughout the process: Hingston would sketch out ideas with the design team and discuss them with Cave before ordering samples. Cave would then offer feedback on samples. Hingston and Cave often work in a collaborative way when producing album art – Hingston Studio designed the packaging for Push the Sky Away and Skeleton Tree as well as Lovely Creatures – and this project was no different.

The Chemical Brothers jumper comes in three colour ways: black and white, green and pink and neon orange and pink. The black and white design matches the album’s cover while the neon versions are a nod to the band’s acid house roots. “The design team [at Paul Smith] showed us these amazing fluoros … and we chose the most extreme colour palettes, which work brilliantly,” adds Hingston. The choice of fabric is also a nod to the punk era.

Massive Attack’s Robert Del Naja worked with Hingston to customise a set of leather jackets from the 1970s. Each jacket is a one-off and profits from their sale will go to Teenage Cancer Trust. “Rob’s an artist in his own right so we wanted to do something that was more aligned to that in a way – so the clothing becomes like a canvas in a sense – and the leather jacket seemed like the perfect surface,” explains Hingston.

“It was really hard to find jackets that weren’t adorned with stuff,” he adds. “We found some great ones but they already had things on the back like odd stud work or tassels and it was very difficult to remove.” The design is inspired by the leather jackets often worn by biker gangs but the glitter finish adds a more playful touch.

Hingston Studio has worked on clothing before – it created a capsule collection with Japanese label Sophnet last year – but this is the first time it has designed clothes in partnership with both a brand and a musician.

To mark its anniversary – and the launch of the collection – the studio has also delved into the archives and recreated 16 of Hingston’s best-known sleeve designs as lenticular artworks. Artworks are on display at the Paul Smith Albemarle Street store from May 3 to 20 alongside box sets and record sleeves. There are covers for Grace Jones, Ghostpoet and Young Fathers as well as the Chemical Brothers, Nick Cave and Massive Attack.

Hingston says the exhibition offered an opportunity to present familiar designs in a new light: “When we started the project we thought, if we’re doing this, for it to be interesting to us as a studio – and also to an audience, because people have seen these things over and over again … so we thought it would be interesting to re-present them in a new way,” he says.

“The nice thing about lenticulars is they work best when viewed on a lightbox – so there’s a nice crossover between the printed sleeve and how people look at sleeves in a digital space.”

The process was different for each lenticular but in each case Hingston says he had to “deconstruct” the design and rebuild it in 3D. “Some of them were two or three months’ work. The early ones were the most challenging because you’re working out your techniques,” he explains. “With lenticular, there are two different qualities you can bring out in an image. One is to do with depth and the amount of depth that you have and the other is the level of animation you bring to the piece. If you bring too much animation it ends up looking really soft and blurry … and if it has too much depth there’s no focal point. So it’s not like you can treat each [design] in the same way. You have to tailor each image. That’s what took the most time – the sampling and testing each image [and refining it].”

In some cases the studio delved into the archives and reshot objects. The cover of Grace Jones’ single Williams’ Blood features a mould of Jones’ head which was used to create the chocolate models of the artist featured on the cover of her album Hurricane. Hingston Studio took the original mould out of storage and scanned it in 3D to create a lenticular for the exhibition.

“We 3D scanned the moulds and rebuilt the composition in 3D and then we wrapped the original sleeve around the 3D model. It gives it a whole other layer of depth that way – rather than just going back to the original 2D image,” explains Hingston.

The lenticulars are striking and offer a much more dynamic alternative to rows of framed record sleeves. Some appear to move as you walk past them while others simply have a new level of depth. By presenting images in 3D the exhibition encourages viewers to look anew at covers that might have been sitting on shelves or framed on people’s walls for decades.

“It’s interesting because to make [each lenticular] you had to sort of deconstruct the image and make it again and you end up highlighting details that you might not have done first time round,” adds Hingston. Lenticulars are for sale and profits will be donated to Teenage Cancer Trust.

Hingston Studio’s work isn’t limited to album art. It has worked with automotive, technology and fashion brands as well as musicians and creates graphic identities and moving image work alongside art directing album covers. But Hingston is perhaps best known for his music commissions – so it seems fitting that his 20th anniversary exhibition is focused around this particular aspect of his work.

“For me it made sense there was a real music focus to this particular show because of the product collaboration,” he adds. “As a studio, we do a lot more than that, but this felt like an interesting way of looking at one part [of the studio’s work] and bringing that to life through lots of different media.”

Hingston Studio’s exhibition ‘Progress’ is on display at Paul Smith, No.9 Albemarle Street, Mayfair, London, W1S 4HH from May 3 to 20. See paulsmith.com for details.