We might all be feeling trapped right now, but Tom Misch and Yussef Dayes are providing a little escapism in the music video for their new track, Nightrider, which comes off their collaborative album What Kinda Music.

The animated video features Misch, Dayes and rapper Freddie Gibbs cruising with the top down through a deserted landscape at dusk. As if things didn’t start off laid back enough, a puff of smoke then transitions into a moonlit dream sequence where the trio hover above marshmallow shaped clouds.

Illustrator and graphic designer James Neilson lent his hand to the design, which was brought to life by Jack Brown, who directed and animated the visuals. The concept felt like an obvious choice to Brown as soon as he was sent the track.

“It’s such an atmospheric sound, along with the lyric ‘honey corvette’ – the idea of a gold convertible driving into the sunset jumped straight at me. I knew James’ style would be perfect for the landscapes, and Tom also wanted a sun setting along with references including the album artwork,” he says.

When developing the colour palette, Neilson opted for rich fruity shades and deep accent colours to accompany the trio’s journey into the night. He landed on blue tones for the foreground as a way of capturing the evening time while adding a “moody atmosphere”.

The final palette was “a bit of a collaborative effort”, says Neilson, working with Misch and his team to draw the link to the sunset tones seen on the cover of the forthcoming album. “The track is obviously really laid back and I hope the colour palette teamed with the sparse landscapes gets that feel across,” he adds. 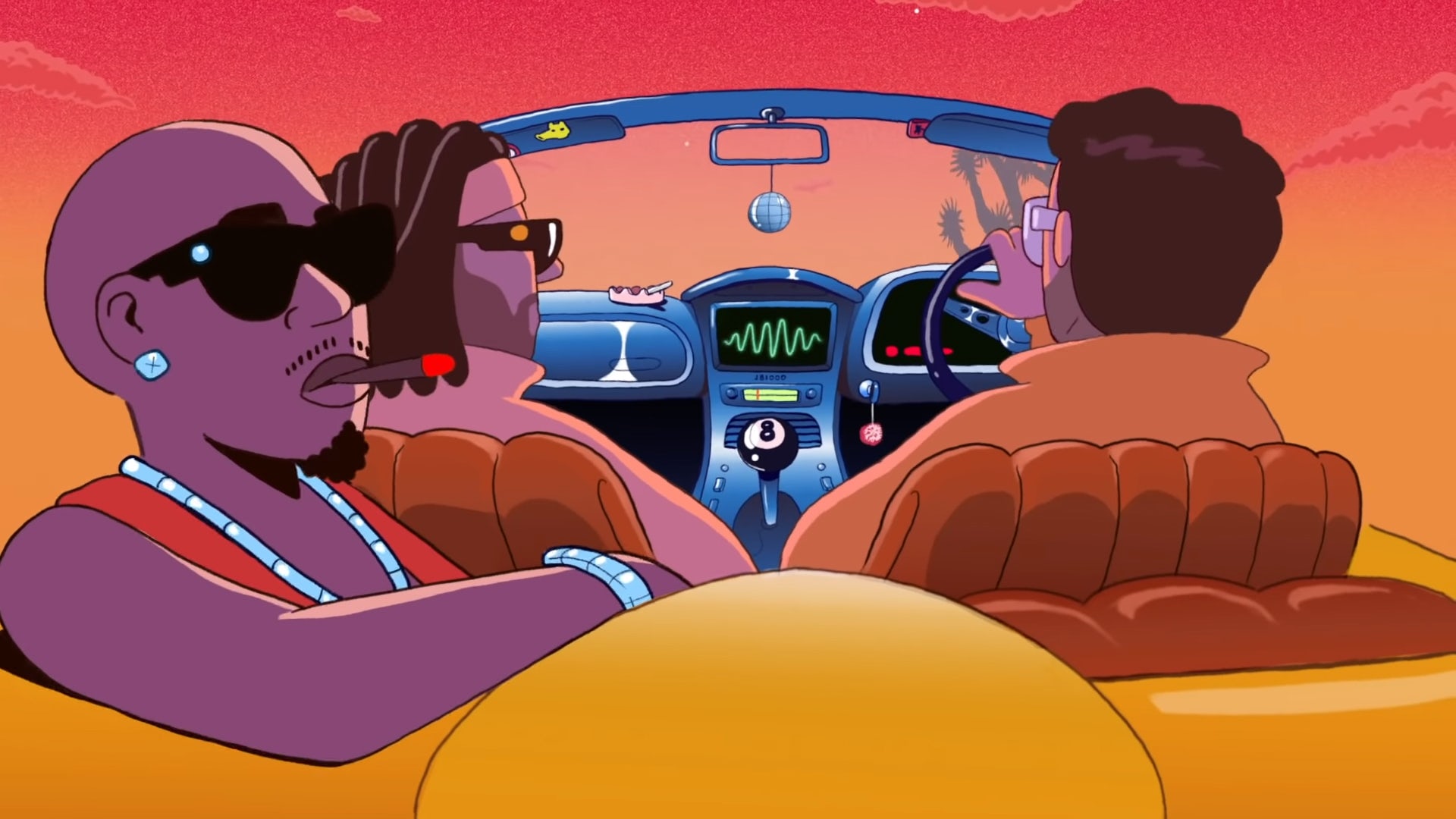 The mellow, drowsy production also marries well with the breezy animation style, featuring a looped feel reminiscent of the visuals seen on lo-fi YouTube channels – the kind that Misch himself has helped to popularise.

“For the rhythm I wanted to create something that suits the strong bassline and beat combined with the overall silky smoothness of the track,” says Brown. “I aimed for the character animation to be the smooth bit, with flowing hair and clothes in the wind (and smoke where hair was not an option). Then to really hit the beat I made the retro radio waves display on the dash.”

Like the track itself, the animation takes a steady pace as it rolls leisurely through landscapes in the centre of the frame. Yet the project itself was slightly more intense. “We had a really fast turnaround for this one, so we only had a little over two weeks from design to final,” Brown says. 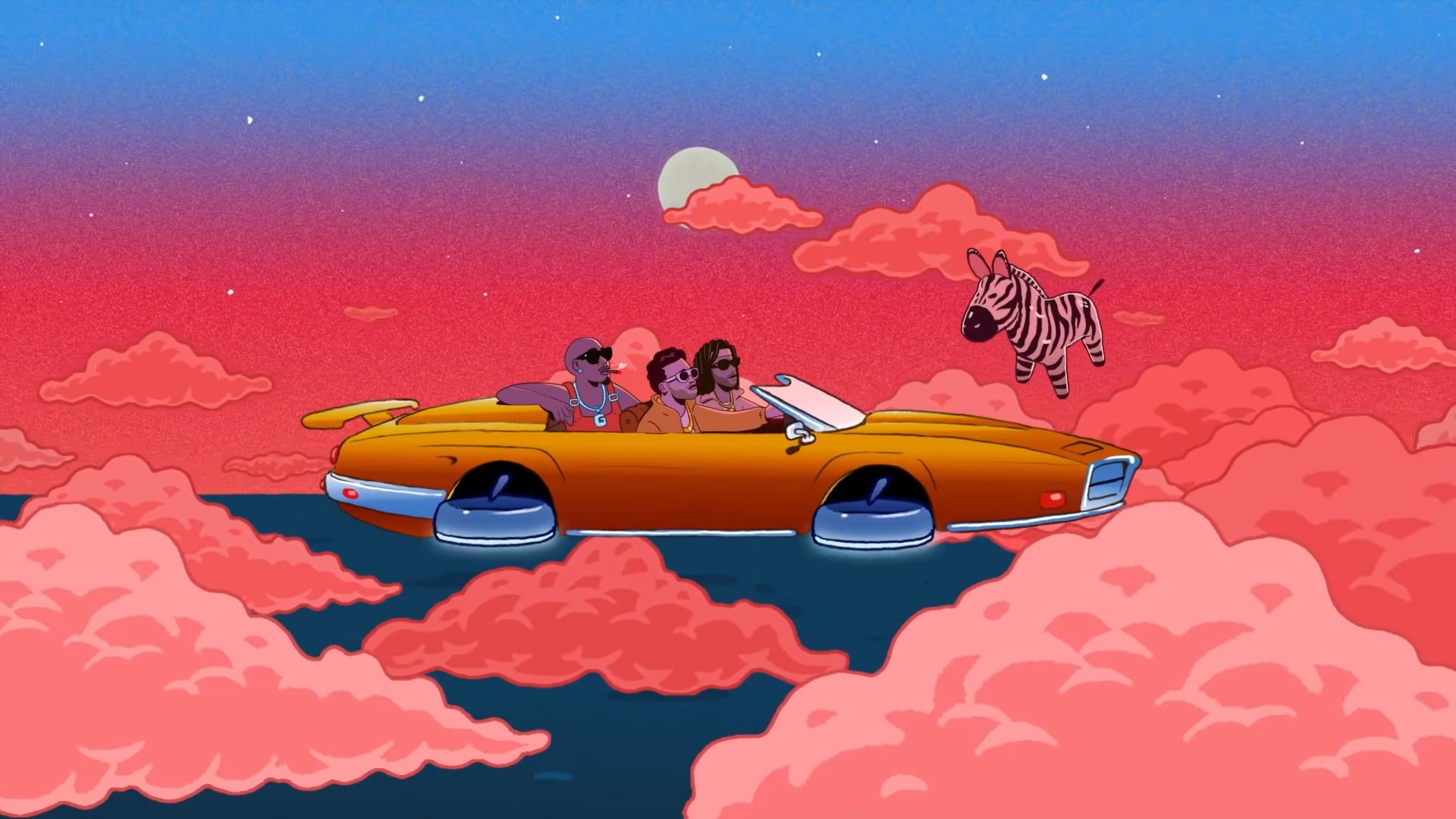 Having worked with Neilson on looped animations before, he brought him back into the mix for the Nightrider visuals. “I thought I would be great to get him on board and create essentially an extended travel sequence for the viewer to just kick back and cruise with Tom, Yussef and Freddie. Who wouldn’t want to, right?”

Bathed in warm hues, their heads bobbing in unison, it’s a tranquil affair that lulls you into a peaceful state – offering a sense of calm when we need it most.