The year in advertising kicked off with some hand-wringing around brand purpose, as Gillette got out of the traps early with an advertising storm, when it released its Best A Man Can Be ad, which addressed the idea of toxic masculine behaviour.

The spot, which featured a decidedly earnest tone, caused a backlash from the off, with critics from Piers Morgan to Mark Ritson decrying its message. In Marketing Week, Ritson described it as “brand purpose hell”, while Rory Sutherland told CR that the ad “stepped into the point of actually demonising males”. “If you want to win the argument, don’t stigmatise a group of people on the basis of their identity,” he continued.

Gillette exposed one of the major risks of brands taking a purpose approach – that their audience might not want a brand to tell them what to do or to think. And it demonstrated a recognised development in brand purpose in 2019 – that just saying something in an ad is not enough. “Marketing and advertising will only get you so far,” Wieden + Kennedy London ECD Iain Tait told CR. “You need to commit. Get behind something. Make it happen. And keep doing it. Because if you’re just doing it for the likes you’ll get busted.”

Nick Asbury sees this evolution in brand purpose as a positive one, but in an article for CR proposed that brands go further and examine what the role of being ‘good’ is in their business. He advocates a move away from the notion that “doing good is good business”, but without throwing out the idea that businesses can bring huge benefits to the world. As ever, what is required is some honesty. “Rather than this strained talk of ‘brand purpose’, how refreshing it would be to hear business people talk about the ongoing tension between succeeding in a competitive market and trying to do the right thing as a company,” says Asbury. “Recognising that the tension exists is the first step towards doing good. The simple intellectual honesty of it is hugely liberating.”

IT’S ALL A BIT META INNIT?

Elsewhere, a number of brands decided to dispense with earnest messaging altogether this year, instead opting to use their advertising to point out that we all know advertising is nonsense (but while still ultimately pleading that we keep buying their products anyway).

Perhaps the most bolshy of these was Brewdog (see top) , which created a veneer of rebellion with a TV spot that ran during Game of Thrones billed as “the most honest ad you’ll ever see”, as well as series of billboard ads. 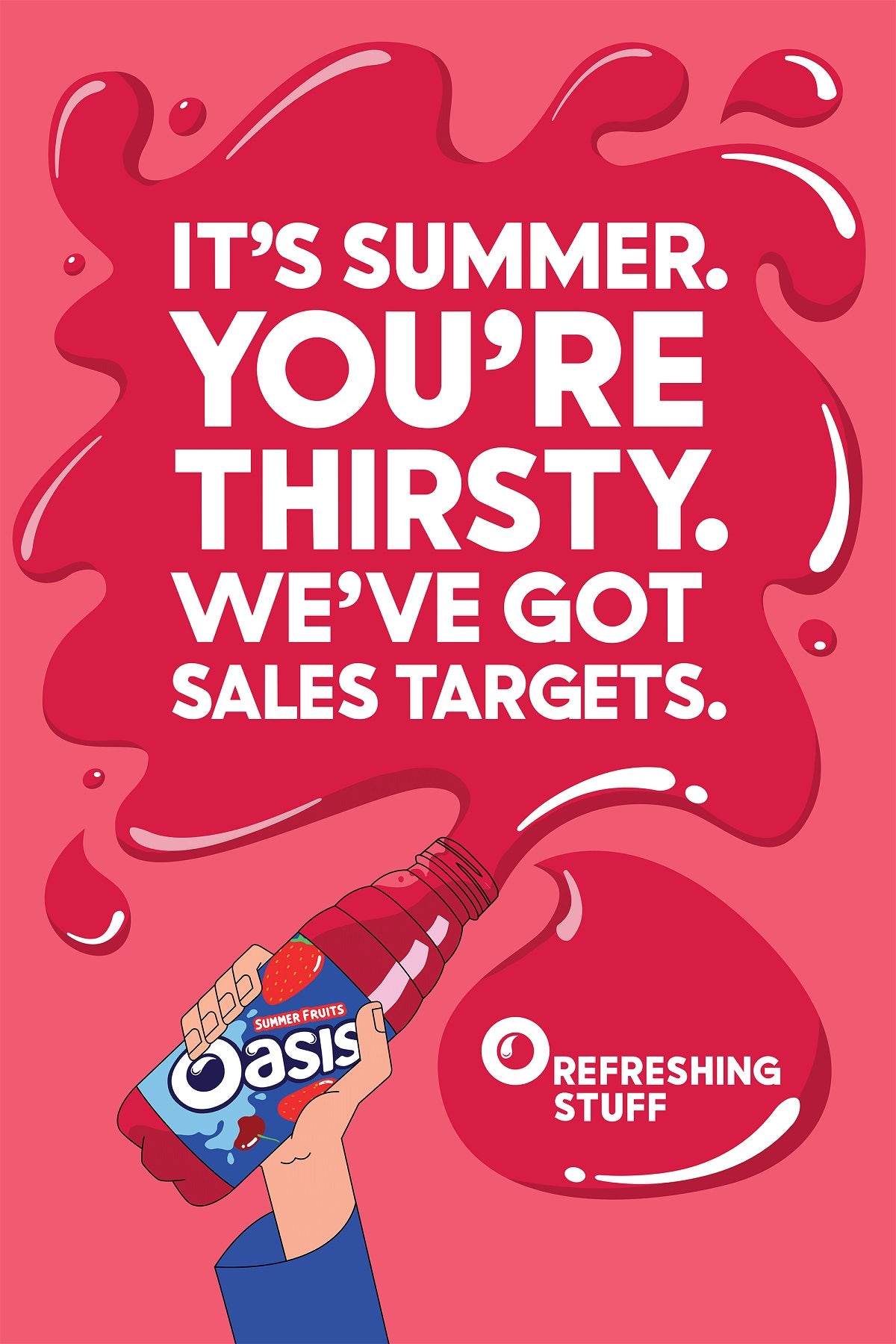 It could be argued that it is the preachy tone of brand purpose that has led us so far in the other direction, as the creative director for Oatly – another brand that embraces the meta approach – explained to CR. “There’s an attempt to be more honest with how people feel about ads that are popping up in their lives uninvited. Like real people we’re deeply committed about things, and then on the weekend we’ll go to a karaoke club and make fools of ourselves. So one day we’ll do a campaign that tries to provoke people to stop drinking milk in Amsterdam, and the next will be complete nonsense. I think more than anything we wanted to be a brand that people wanted to hang out with, and rather than being preachy all the time, we vacillate.”

Of course, there is a risk that this knowingness will backfire on these brands. “It does feel like there’s an element of self-loathing behind it,” Nick Asbury told CR of the meta approach. “Maybe there are more creatives around who fundamentally don’t believe in advertising. But drawing attention to the process with meta-ness is a risky approach. With public speaking they say you should never apologise for being nervous, because it draws more attention to you as a speaker. Meta-advertising is similar to that – it draws attention to the process in a way that is meant to charm people, but probably just annoys them. Just get on and advertise, it’s fine.”

THE WAY WE WERE

Beyond the somewhat cynical tone of the meta ad trend, there remained a firm trend for nostalgia creeping through marketing this year, as we saw the return of yet more much-loved childhood ad characters (hi, Fido Dido!), and the rerelease by Hovis of its famous Boy on a Bike ad, an ad that felt nostalgic on its first release, in 1973.

While it’s uncertain quite who the Hovis ad is aimed at now (apart from those who love a list programme of the best ads of all time, where it will always appear, alongside the Smash martians), one brand that got the use of nostalgia bang on was Spotify, whose ad campaign (by Who Wot Why) brilliantly demonstrated the effects of ageing, and proved that looking back can be witty and smart and not all just rose-coloured spectacles. 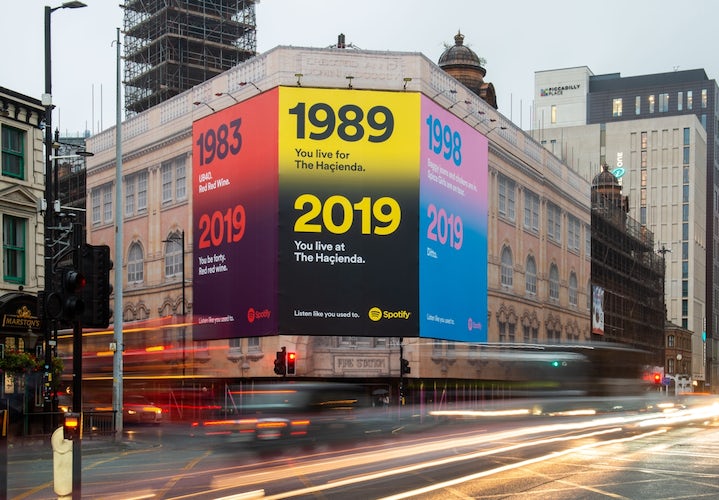 A CRISIS OF CREATIVITY?

In June, a new report from advertising body IPA suggested that creative effectiveness in advertising was in crisis. Billed somewhat dramatically by its author Peter Field as “the report I hoped I’d never have to write”, it suggested the link between work that is successful in creative awards shows and effectiveness was no longer nearly as strong as it once was.

Cue plenty of handwringing about whether creativity is as vital to advertising success as we’ve always thought it was. But delve deeper into the report – as columnist and newly appointed D&AD CEO Patrick Burgoyne did for CR – and the crisis is not so much in creativity itself but in the type of creativity that is awarded by the industry.

Burgoyne points out the move away from long-term brand building – a recognised key to marketing success – in favour of short-term goals in some of the most awarded work. And yes, purpose is found to be the culprit once more.

“At some awards shows, the balance has shifted too far away from the kind of long-term, brand-building, emotionally-engaging ads that underpin effectiveness,” he writes. “I suspect the at-times cynical rush toward ‘purpose’ has had a role here as creatives choose to honour work that makes them feel better about themselves but has questionable value for clients.”

The question is not so much about whether we should continue making marketing that places creativity at its core, but whether juries at award shows should think about what they awarding and question its success in the wider world, rather than opting for ads that make them feel good about the industry they are in. “Jurors, your future is in your hands,” concludes Burgoyne.

SO HOW DO WE MAKE ADVERTISING BETTER?

As usual, there was plenty of discussion on why advertising continues to lack the shine and excitement that it once had. Of the reasons, in part this is due to a lack of risk, says Hermeti Balarin, ECD of Mother London, who talked to CR about the benefits of going bold.

“Advertising is turning into an AI, algorithm-generated bland thing that just bothers people around the internet,” he said. “If you’re not doing something, and waking up the next morning and rushing to Twitter to see if people are actually reacting, you’re contributing to the problem. Now more than ever we’re trying to convince our clients to lead the way, and be about creativity and spontaneity versus pleasing everyone and being like paint by numbers.”

Ben Kay put forward the argument that the industry had become too democratic and that a bit of single-mindedness was needed back in the game.

“The death of a thousand cuts of the past is now the death of ten thousand cuts,” he says. “That’s not to say that every new suggestion is a guaranteed compromise (some are very helpful), but the very act of being inclusive lends itself to dilution, and dilution is rarely the path to excellence.”

Meanwhile Rob Gray emphasised the need for a better relationship between the strategists and the creatives, in reflection of the changing nature of the industry.

“In this new world, planners have the opportunity to create a valuable new role for themselves,” he says. “They used to get out into the field and bring the customer into the process. Now they also need to bring the boardroom into the process. Building a strong brand is no longer purely about producing great advertising. Someone needs to join the dots across the vast array of activations needed to build modern brands. Someone needs to be able to decipher the objectives, strategies, challenges and opportunities being discussed in the boardroom (and help shape them if necessary). They need to be able to take this complexity, simplify it, and work out where the opportunities for creativity are. And they need to be able to work with designers, art directors, writers and all the rest to create work that builds brands.”

It might feel hard to track down really good advertising today, but there is no denying that marketing is everywhere. In 2019, brands and agencies finally began to wake up to the huge potential offered by gaming, while tentative steps were made into looking at the creative options presented by voice activated products.

And if all else fails, we also learnt that you can always try and persuade your customers to wear your brand, as demonstrated in the release of unexpected garments such as the Dominos cape and the KFC Bucket Hat. 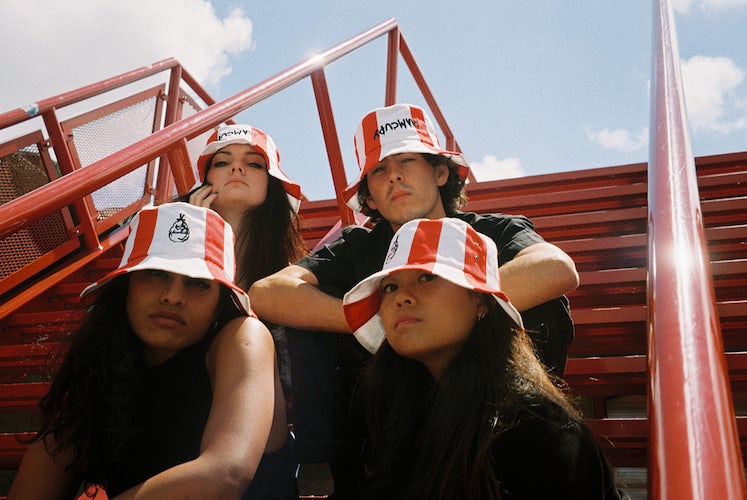 “For years we looked at a KFC bucket and wondered whether it would make a good hat … now we know,” said W+K Amsterdam copywriter Dasha Ovechkina and Creative Director Cal Al-Jorani on release of the latter.

On this basis, lord only knows what joys await us in 2020.

How the Ministry of Stories is helping kids be creative

So Satisfying’s new look taps into our ASMR obsession