I balk slightly at describing activism as a ‘trend’ in 2019, but this year can be seen as a tipping point for various protests of recent years. Climate change activism in particular has had a larger presence than ever, thanks to the work of Extinction Rebellion and Greta Thunberg (as well as climate change’s increasingly obvious effect on our lives and planet through fire and floods).

XR was only formed in October 2018, but this year became a household name due to its (often controversial) use of nonviolent civil disobedience to call on the government to address climate change. At the heart of the organisation was a strong identity that played out on posters and banners at protests.

The power of the design was recognised by XR’s founders from the start, and the group’s use of a bold logo and graphics has set it apart from similar organisations and undoubtedly helped to spread its message. Clive Russell, design director of This Ain’t Rock ‘n’ Roll, who is at the helm of the XR art group, explained the ideas behind the design to CR.

“We took inspiration from early 50s stuff and the Paris 68 stuff, so we wanted to create a font that was deliberately slightly wonky and wood type-like without going down the hackneyed distressed route,” he says. 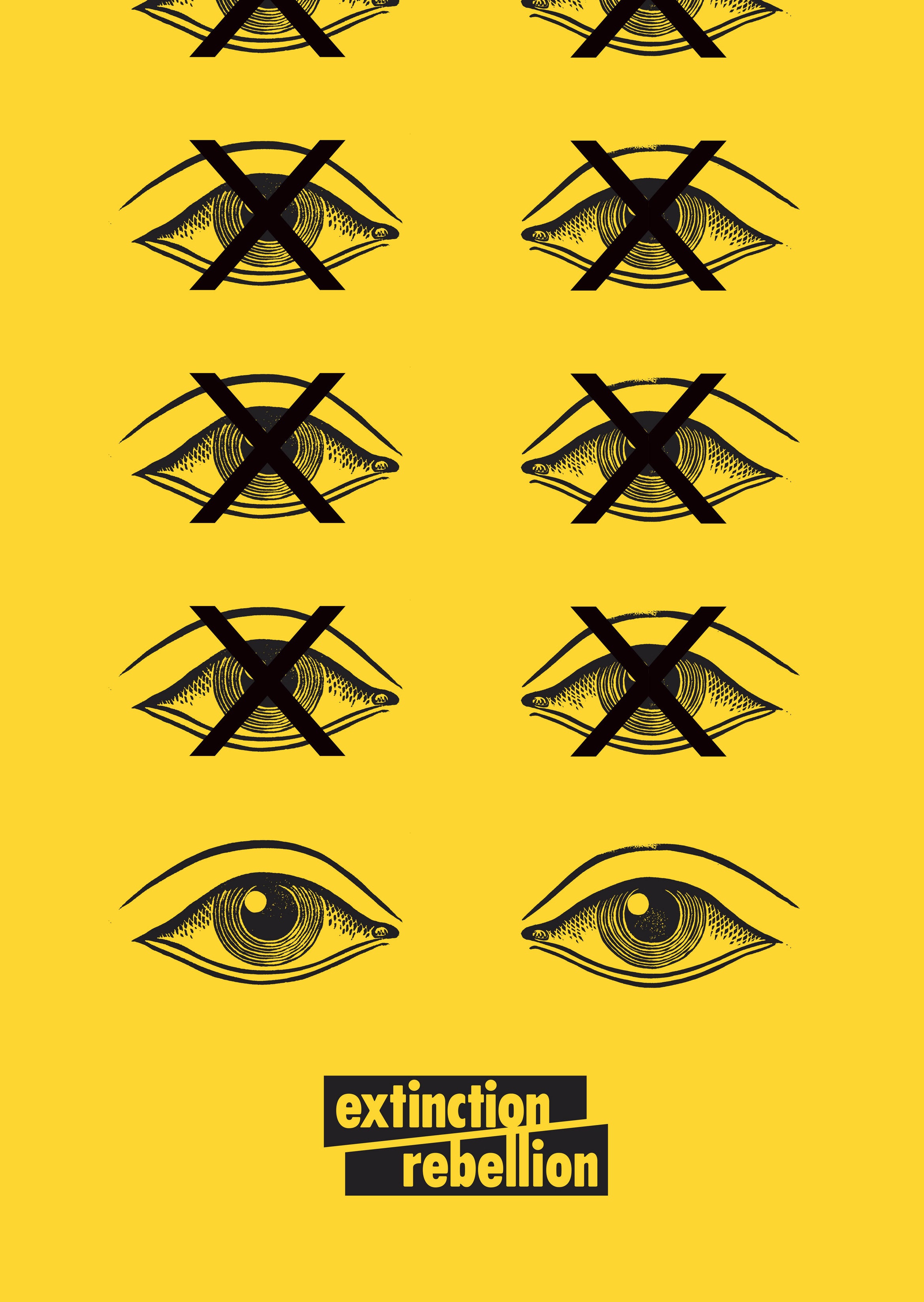 “When we print something we actually print it properly via silkscreen or linocut, and generally try not to get things looking distressed. We try and make it look strong: I’m a graphic designer, so I don’t want lots of wonky, sort of pseudo-punk crap.

“It was important that there was a sense of dark humour,” Russell continues. “The colour palette we use hints at the intersectional nature of the movement – every single person can be involved. Other eco movements have centred around the green, and we do use green, obviously, but we’re about much more than green issues – there are big cultural issues we’re facing now too.”

HOW CREATIVES CAN PLAY THEIR PART

This year has seen increased questioning by advertising creatives and designers about the role they play in encouraging the consumerism that is often damaging to the planet and wider society. “As a designer I feel passionately that we are disproportionally responsible for a lot of the consumerism that occurs within society,” Russell told CR. “I know people have to do a job, but we try and work for charities and let our principles guide us.”

Elsewhere, CR reported on Glimpse, a new organisation that is similarly trying to engage creatives and designers in thinking about their contribution to society and channel some of their energies towards work for charities and NGOs.

The company has created work for organisations including the Fairtrade Foundation and Help Refugees and key to their approach is using the ‘big idea’ of commercial advertising in ways that are unexpected in work for non-profits. There is a particular focus on humour and optimism, in order to hopefully cut through in a different way. So far projects have included Choose Love, a pop-up shop selling only products that can be bought for refugees and a ‘hot chocolate salon’ hidden in the back of a newsagent in east London for the Fairtrade Foundation, which aimed to highlight the financial plight of female cocoa farmers in Africa.

According to Glimpse’s founders, James Turner and Zac Schwarz, the input from commercial creatives is vital to their work. “What happens quite often is charities will try to do a positive campaign, it will not have the same kind of shareability or cut through as their more upsetting content so they’ll dismiss that mode of communication as ineffective,” said Turner. “But this is where people from advertising or marketing come in – they are very good at using humour, at using pop culture references, at using music to make a more positive story feel appealing and make you want to share it. I just don’t think the people who work at charities … it’s not their forte. That’s why we’re thinking about what happens when you bring in people from that commercial sector to work on this.”

Within the creative industries, agencies, studios and brands continued to wrestle with the need for greater diversity among their ranks. New action groups that aim to shine a light on different areas of the industry that have perhaps been overlooked continued to spring up. Among these was Equal Lens, a platform to highlight opportunities for women in photography, which was prompted by the shocking statistic that while the Association of Photographers’ student membership is 75% female, only 18% of its accredited photographers and assistant photographers are women.

Equal Lens follows Free The Bid, founded in 2016, which has made progress for women directors in advertising and film (and this year evolved into Free The Work). According to Equal Lens’ founder, Jaki Jo Hannan, at the root of the problem is unconscious bias over who is suitable for a job. “We need to break that stereotype that women just shoot fashion and children. Women can shoot tech, they can shoot cars, they can shoot huge landscapes and buildings and extremely technical sets. We need to break that unconscious bias of what a woman’s style of photography is – or a man’s,” she says.

The need for equal pay among genders, a big topic in recent years, continued in 2019, and other more nuanced difficulties for women at work were raised. In an article for CR, photographer Sophie Ebrard reported on the difficulties of being a breastfeeding mother and working photographer, after she was fired from a job for requesting short breaks to feed her daughter.

In the piece, Ebrard points out the wider ramifications of the issue. “My story is specific to breastfeeding, but this issue is bigger than boobs. Whether you breastfeed, pump or formula feed, options for mothers returning to work are extremely limited. In a society that craves female voices and representation, workplaces need to ask themselves if they are designed for the realities of motherhood – and if not, why? While offices are taking steps to better accommodate working mothers, clearly there’s room for improvement.”

There were also calls for more diversity among the people who appear within ads and in the wider media. Selma Nicholls launched the talent and casting agency Looks Like Me five years ago to promote more inclusive casting and has seen backing from the Virgin Start-Up scheme. This year it formed a partnership with Getty Images.

Its aim is to promote more diversity in what we see on screen but also to encourage this in the teams that are creating the work behind the scenes. “I am mindful of always working with diverse and inclusive teams of people from all different walks of life, because I just feel it unearths a different type of energy,” says Nicholls.

Also tackling stereotypes is the organisation 56 Black Men, which takes its name from the number of black murder victims in London in 2018. The project’s founder Cephas Williams is challenging the way that black men and boys are often portrayed in the media, and to make this point recently exhibited a photographic portrait series at M&C Saatchi of men from wide-ranging careers – from a plumber to a scriptwriter to a politician – all dressed in hoodies.

Williams also believes the key to change lies in wide-ranging diversity both in terms of the stories that are told and those creating them. “If you look at the representation of who’s writing the news, there’s not really many black journalists or black reporters,” he says. “Then you go to broadcast media, and again when you look at presenters that are presenting our news that don’t look like us.

What was apparent more than ever this year is the contribution that creative people can make to causes. From the activism of brands like Lush to Do The Green Thing’s ongoing work to tackle climate change to Led By Donkeys’ witty and subversive ways of questioning the integrity of our politicians, it is clear that creative thinking and ideas can play an important part in changing our world.

And as Naresh Ramchandani pointed out in an article for CR about why he and his team at Pentagram were taking part in the Global Climate Strike on September 20, there is now an active need to demonstrate to the next generation the influence that creatives can have.