The creative industries are often thought of as progressive and cutting edge – but when it comes to gender imbalance, it seems it’s just as blinkered as every other industry, battling inconsistent pay gaps and continually having more men than women in top roles.

However, according to the Creative Industries Policy and Evidence Centre (PEC), to get a true insight into the imbalance you need to do more than just count the numbers of men and women in the industry, you also need to look at how they’re both being portrayed in the media. Luckily for us, it’s a research project the PEC has just taken on in partnership with Nesta.

Using data and machine learning as part of its research, the PEC hopes to “examine gender imbalances in media reporting on the creative industries and how media coverage of women in the sector has changed in recent years”. As its first case study, the project looks at the Guardian – mainly because it’s the only major UK newspaper that offers open access to its content via a public API.

Researchers analysed over half a million articles published from 2000-2018 across the newspaper’s creative sections, from Fashion to Art&Design, to compare how men and women have been written about – and how coverage of women in the creative industries has changed over time. 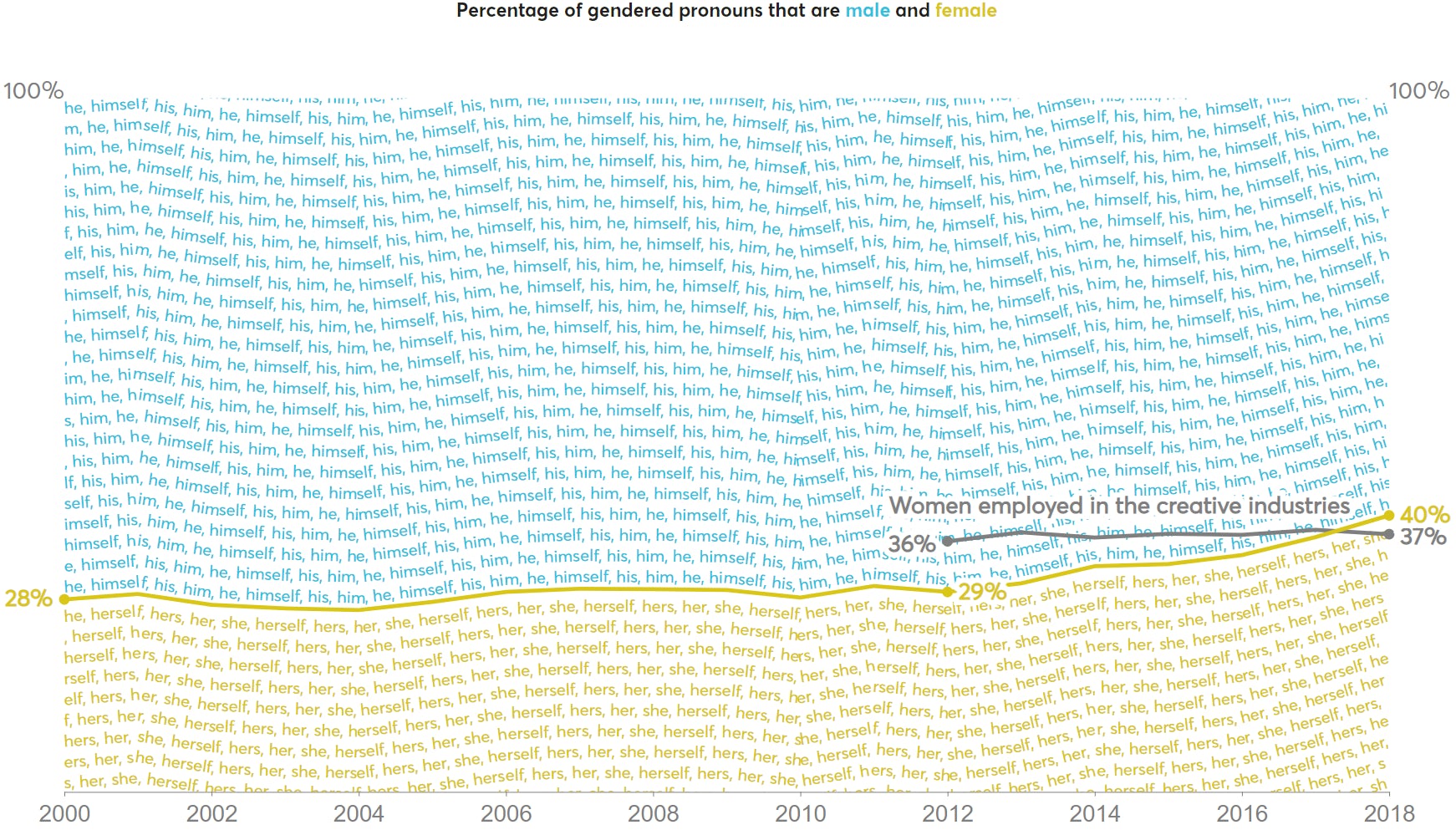 Some key findings included the amount of space given over to comments made by women. From 2000 to 2013, where “pronouns were used in an article to identify a person’s gender (eg. she, her, he, him)”, the research found that less than a third of pronouns referred to women. By 2018, this had grown to 40%.

The increase happened despite the gender mix among workers in the UK’s creative industries remaining relatively unchanged at around 37%, according to the research. If the current trend is anything to go by, 2019 might be the first year in which women are quoted as often as men in a given month.

There were some discrepancies between creative sections of the newspaper – the Fashion section gave the most space to women in 2018 and is the only section where the balance tipped over 50% in favour of women. In contrast, in the Tech and Games section, female pronouns comprised just a quarter of all pronouns used in 2018. These figures are low, but the PEC points out that they’re consistent with the gender mix of workers in IT, software and computer services, which was said to be 21% female in 2018.

As well as analysing how much women were quoted, the research also analysed how their comments were reported. Compared to men, the PEC and Nesta found more of a focus on the “sounds made by women” in articles – for instance, “laughs”, “cries”, “giggles” and non-verbal reactions such as “smiles” or “grins”. In contrast, words that “imply creative achievements and leadership roles” – such as “directed”, “performed”, “designed”, as well as “managed” and “founded” – were used to refer to men more often than women.

Cath Sleeman, researcher at the Creative Industries Policy and Evidence Centre and Head of Data Visualisation, Creative Economy at Nesta, said of the findings: “While the research shows substantial positive change in recent years, there are still clear gender imbalances in coverage of areas such as technology and games, echoing the gender imbalances amongst workers in these sectors. Beyond the individual findings, the research shows how big data and machine learning can be used to generate more meaningful insights on gender inequality across any sector of the workforce.”

Sleeman also explained what effect this research might have, especially if they’re given access to other media organisations: “Going forward, a more equal representation of women in the press may have two effects: it may encourage more women to enter, but it may also give the impression that the creative industries are more balanced than is the case. This highlights the importance of using big data to inform measures of diversity – rather than simply counting the number of men and women, we should aim to capture differences in how people are portrayed.”

While the PEC and Nesta’s findings are currently based on data pooled solely from the Guardian, it’s interesting to see how this approach could be used to tackle gender representation. Of course, it’s important to have more women in the creative industries – but if we’re not reading about them in the same way we do about the men in similar roles, the imbalance will remain just as warped.