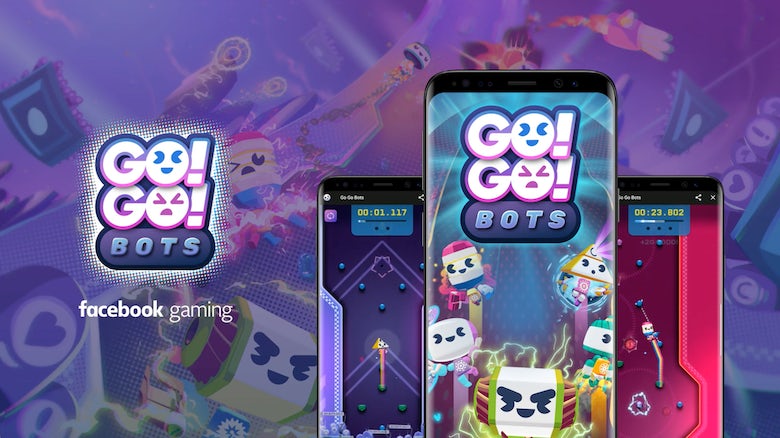 It’s six years since digital design studio UsTwo created Monument Valley: an MC Escher-inspired puzzle game that racked up millions of downloads, and set a new bar for mobile gaming in the process. The project’s success prompted UsTwo to create a dedicated games division, which has spent the past few years crafting some impressive follow ups – from Monument Valley II to the charming Assemble With Care.

This week, UsTwo’s New York office released a new title created exclusively for Facebook’s gaming platform. Set in a glitchy, cyberpunk universe, Go Go Bots is a fast-paced game that allows players to test their logic by completing a series of climbing challenges. Players can choose from one of five robot characters and play in solo or multiplayer mode, competing against others to complete climbing routes in the fastest time possible.

As Chris Marotta, design lead at UsTwo New York, tells CR, the gameplay was inspired by real-life bouldering, where people scale walls by navigating colour coded courses. “At [bouldering’s] heart is the concept of the ‘climber’s puzzle’ – this idea that getting from A to B is a little problem to solve, sometimes through pure speed and power, other times through grace and cleverness,” he explains.

The game was designed to be easily consumed in idle moments – such as waiting for a train or commuting to work (or, in the case of lockdowns, sitting on the sofa at home). “We know that players on Facebook’s Instant Games gravitate towards snackable experiences, where there’s a really short ‘time to fun’. So we wanted something that gave players a meaningful session during those few minutes,” says Marotta. “We knew that we had to embrace the competitive spirit – in the context of a race, if the player doesn’t see a clear path to victory, or feels like they can’t win, the game is suddenly a lot less interesting.”

The project came out of a wider partnership between UsTwo New York and Facebook: the studio has spent the past four years working with the social media platform to develop the vision for its games platform, which launched in 2018. The platform allows developers to create games in HTML5, which means players can access them instantly on a mobile or desktop from within the Facebook app. (A standalone app is also available on Google Play, which allows players to watch gaming streams and take part in gaming groups as well as playing titles created for Facebook Gaming.)

The process began with a two-day workshop, where Facebook briefed UsTwo on the kind of  experience they wanted to offer players. UsTwo’s initial idea was to create custom bots which players could put through a series of wacky challenges – a concept inspired by cult Japanese game shows like Most Extreme Elimination – but this soon proved problematic. “We thought it would be fun for players to watch their bots get destroyed in goofy ways – but it turns out there’s a fine line between fun and frustrating,” explains Marotta.

“As we moved towards [creating] a one-handed experience, we shifted the Go Go Bots concept to a futuristic game show where different bots raced up an epic climbing wall. We tried to retain that game show vibe but centred it around climbing and made the customisation more about the choice of bot [and] play style,” he adds.

With its focus on fun and quick challenges, it’s a very different experience to UsTwo’s previous releases, which are based around intricate and absorbing puzzles. And with its clear instructions, playful graphics and a race-against-time mechanic, the game feels reminiscent of vintage arcade titles from the 1980s.

Maz Karimian, Strategy Lead at UsTwo New York, says the game’s design was informed by user behaviour on Facebook Gaming and the platform’s focus on providing accessible games which promote “friendly competition” and interaction. “A key difference between Facebook Gaming and other gaming platforms is how and why its users engage with the platform. There’s a tendency to characterise these users as ‘casual gamers’, which isn’t all that informative or actionable from a design standpoint,” says Karimian.

“We found it more useful to think about them through the lens of key contexts: when and where are they engaging with the game? How much time do they have to play? Do they only have one hand free? Discovering, discussing and ultimately designing for the contexts in which people might play helped us make a game that (we hope!) is enjoyable and accessible for everyone.”

With mobile gaming now accounting for around 10% of all app usage, it’s little wonder that Facebook has set its sights on developing its own titles. Its gaming offer appears to have proved popular so far – according to Facebook, more than 700 million people now play games, watch gaming videos or interact with gaming groups through Facebook Gaming each month. Alongside working with UsTwo, Facebook Gaming has also been working with Pokémon, and released two new Pokémon-themed games – Pokémon Tower Battle and Pokémon Medallion Battle – on its platform in 2019.