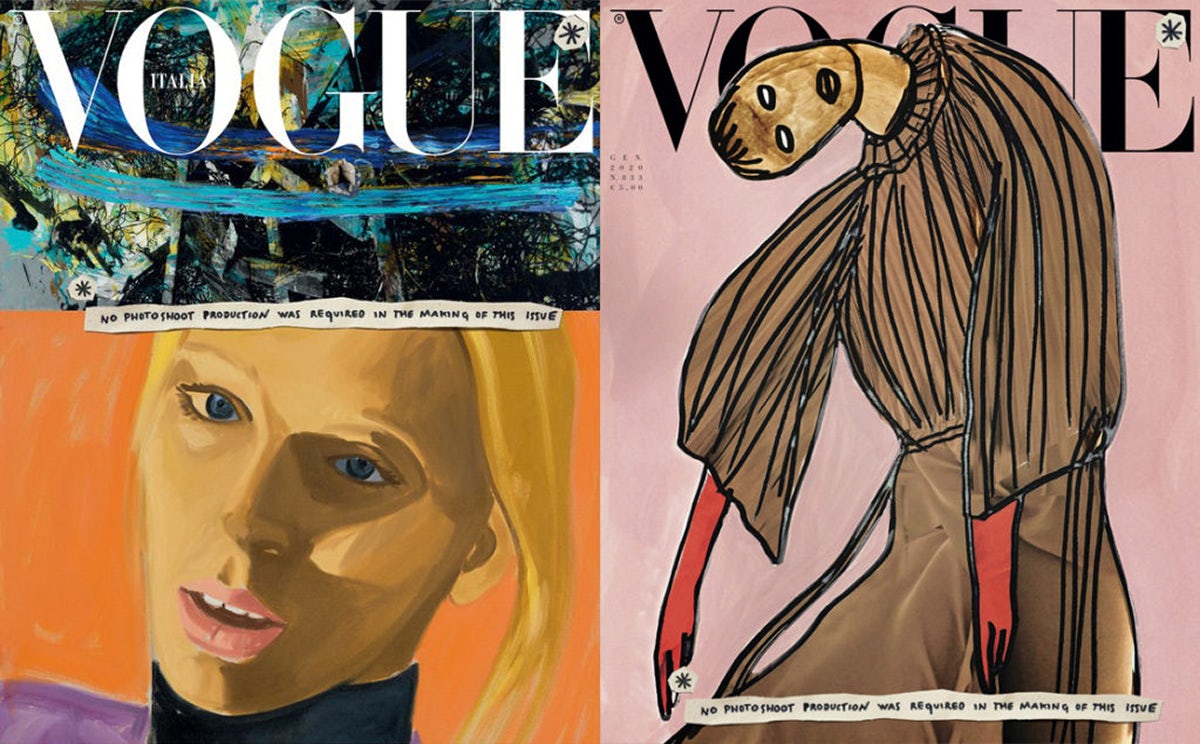 In the latest issue of Vogue Italia, you’ll find everything we’ve come to expect from fashion magazines: models, make-up and must-have clothing. Unlike the average issue, however, there’s a marked absence of glossy photoshoots – instead the team has used illustrations to usher in the new season.

Marking a meaningful push towards sustainability, Vogue Italia commissioned eight illustrators to produce the all-important visuals for January 2020, each creating their own cover as well as designing for the features between the pages. Among those commissioned are Final Fantasy artist Yoshitaka Amano, artist and Kanye West collaborator Vanessa Beecroft and comic book artist Milo Manara.

Writing in the editor’s letter, Emanuele Farneti reeled off the (rounded down) figures of what went into Vogue Italia’s most recent September issue. “One hundred and fifty people involved. About 20 flights and a dozen or so train journeys. Forty cars on standby. Sixty international deliveries. Lights switched on for at least ten hours non-stop, partly powered by gasoline-fuelled generators. Food waste from the catering services. Plastic to wrap the garments. Electricity to recharge phones, cameras….”

*NO PHOTOSHOOT PRODUCTION WAS REQUIRED IN THE MAKING OF THIS ISSUE A preview of the January 2020 Vogue Italia Special Issue on newsstands January 7th @Yoshitaka_Amano featuring @LindseyWixson in @Gucci Cover 5 of 7 *** "All of the covers, as well as the features of our January issue, have been drawn by artists, ranging from well-known art icons and emerging talents to comic book legends, who have created without travelling, shipping entire wardrobes of clothes or polluting in any way. The challenge was to prove it is possible to show clothes without photographing them. This is a first, Vogue Italia has never had an illustrated cover: and as far as I know no issue of Vogue in which photography is not the primary visual medium has ever been printed. Thanks to this idea, and to these artists' process, the money saved in the production of this issue will go towards financing a project that really deserves it: the restoration of @FondazioneQueriniStampalia in Venice, severely damaged by the recent floods.” @efarneti See more via link in bio. Full credits: #LindseyWixson @thesocietynyc Editor in chief @efarneti Creative director @ferdinandoverderi Fashion @franragazzi @robertaninapinna Casting directors @pg_dmcasting @samuel_ellis @ DM Fashion Studio #VogueValues

Many thanks to @vogueitalia @karenwisdom_ @ferdinandoverderi @efarneti : 2020 I made a Vogue cover @ambar_cristalz as “María” dressed in @gucci “María dressed in Gucci” 11×14 acrylic on paper

Of course, the average issue doesn’t just consume a vast amount of environmental resources but financial ones too. As such, the money saved in producing the January issue will go towards restoring the Fondazione Querini Stampalia in Venice, which was damaged by recent floods. Vogue Italia has also pledged to use fully compostable plastic packaging from now on.

The fashion industry has repeatedly come under fire for its contribution to climate issues. There has been some positive movement: many creatives are producing new, more sustainable materials, and some outspoken designers have opted out of the notorious fashion week calendar. However, the industry still attracts criticism for changing too little, and too slowly. Farneti wants to address the elephant in the room: “Change is difficult, but how can we ask others to change if we are not prepared to call ourselves into question?”

Most responses to climate issues call on us to look to the future. Yet by reviving the beautifully rich tradition of illustrated covers, Vogue Italia shows that sometimes the past has the answer after all.

True Story : I moved to Milan in 2011 to work for Miu Miu/ Prada and left the following year…fast foward to 2020 my painting is on the cover of Vogue Italia. Thank you @ferdinandoverderi @karenwisdom_ @efarneti & @vogueitalia team! @assabaradjiofficial in @gucci ❤️ 56 x 76 cm / Acrylic on Arches paper