The work of some of the most successful design practitioners, past and current, which addresses the issue of effective persuasion will be presented and discussed at the Hoffmitz Milken Center for Typography (HMCT) dialogue, VOX POP London—Typographic Voices: Persuasion, 6pm on July 12, at St Bride Foundation.

VOX POP London—Typographic Voices is the continuation of a forum that began in March 2018 at HMCT at ArtCenter College of Design, Pasadena, USA. First created as a symposium, VOX POP Los Angeles—Typographic Voices examined the role of typography and graphic design in Protest, Persuasion and Empowerment. Among the participants, including the audience, were notable artists, designers and educators. The fuse was lit to ignite discussion through a series of dialogues in London.

“The language and words we use are significant to how we define ourselves and impact how an issue is conveyed,” says Professor Gloria Kondrup, executive director of the HMCT.

In April 2018, the first HMCT’s VOX POP London dialogue on the subject of protest saw thought-provoking discussion develop between designers Jonathan Barnbrook, Lucienne Roberts, Ty Drake, and the audience. They explored the visual power that graphic design brings to understanding world issues such as bombing civilians in Gaza, the recent populist victories in elections, and racial and gender inequality.

The dialogue continues on July 12. On the panel will be David Law, founder and executive creative director of multi-award-winning London design firm SomeOne. Their work for brands such as SpyScape tackles the issue of our privacy today. Law will discuss what a non-profit can learn from a for-profit, and examine the techniques commonly applied by commercial businesses that are often missed by non-profit organisations.

Law will be joined by Alex Aiken, founder and creative director of Perfect Day, a firm that focuses on non-profit social issues. “How do you persuade kids in Africa that life is better without drugs, alcohol, and all the trappings that western society offers? What is your strategy for typographic choices in order to support campaigns of global organisations?,” asks Aiken.

Graphic designer Naomi Games will reflect on the work of her father, British designer Abram Games, who designed the simplest but most persuasive of posters. “From his designs during WWII to his commercial posters, it was his personal philosophy of ‘maximum meaning, minimum means’ that gave his works their distinctive conceptual and visual quality,” she says.

In 2016 designer, writer, and photographer David King died and left a legacy of impactful work behind. A rare insight into King’s design process will be shared by his long-time friend and collaborator, artist and designer Judy Groves.

Joining the discussion will be HMCT creative director and British designer Professor Simon Johnston. Co-founder of the 1980s London design studio 8vo, he now teaches full-time at ArtCenter, and focuses on the design of publications for galleries and museums through his California-based design practice Simon Johnston Design.

He remarks: “In these political times, people’s voices need to be heard, and we have become more aware of how we have to speak truth to power and get messaging out. Whether it’s painting a sign yourself, printing something letterpress, tweeting, starting a website or starting a campaign, the tools are there.”

HMCT invites you to join the discussion.

Join Lucienne Roberts for a guided tour of Design Museum’s Hope to Nope exhibition on July 11. Roberts is co-curator of the exhibition. Tickets bought before July 5 will cost only £5. Tickets are available here. 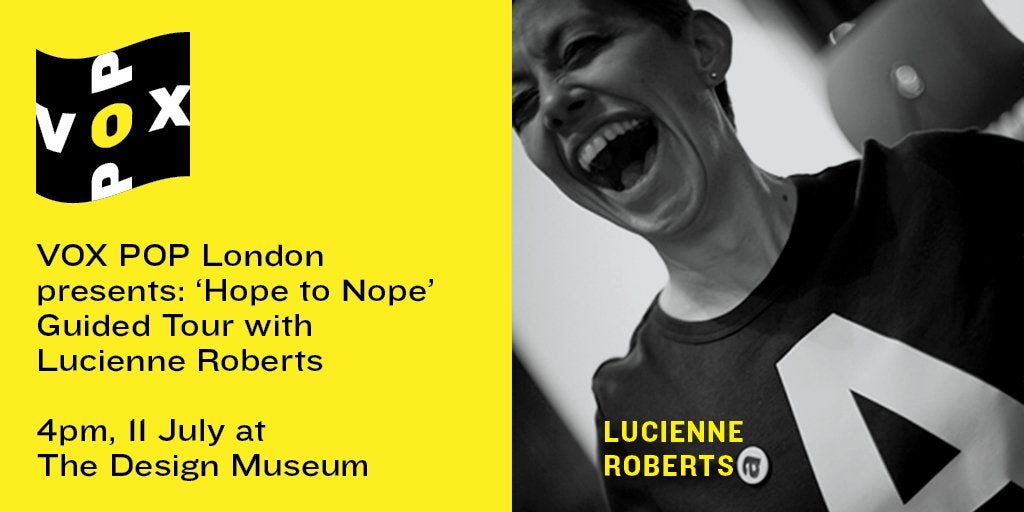