The Gourmand definitely isn’t your average food magazine. Founded in 2011 – shortly after the launch of a certain social media platform called Instagram – the biannual food and culture journal has been careful to give the #foodporn trend a wide berth. Instead, it examines subjects as varied as fashion and film through the universal subject of food. Previous features have included an interview with a lexical-gustatory synaesthete (someone who can taste words) and a piece on an unassuming diner in Silicon Valley called Buck’s of Woodside, which has become the site of countless power lunches and big business deals.

Founders and partners David Lane and Marina Tweed both come from a design background; Lane is also art director of Frieze and Tweed previously worked as a project manager at Construct London. It’s arguably thanks to this that the magazine has become known for its imaginative and unusual approach to visuals, particularly when it comes to working with different food photographers. Here, Lane talks us through some of his favourite photo features from the magazine’s seven-year history. 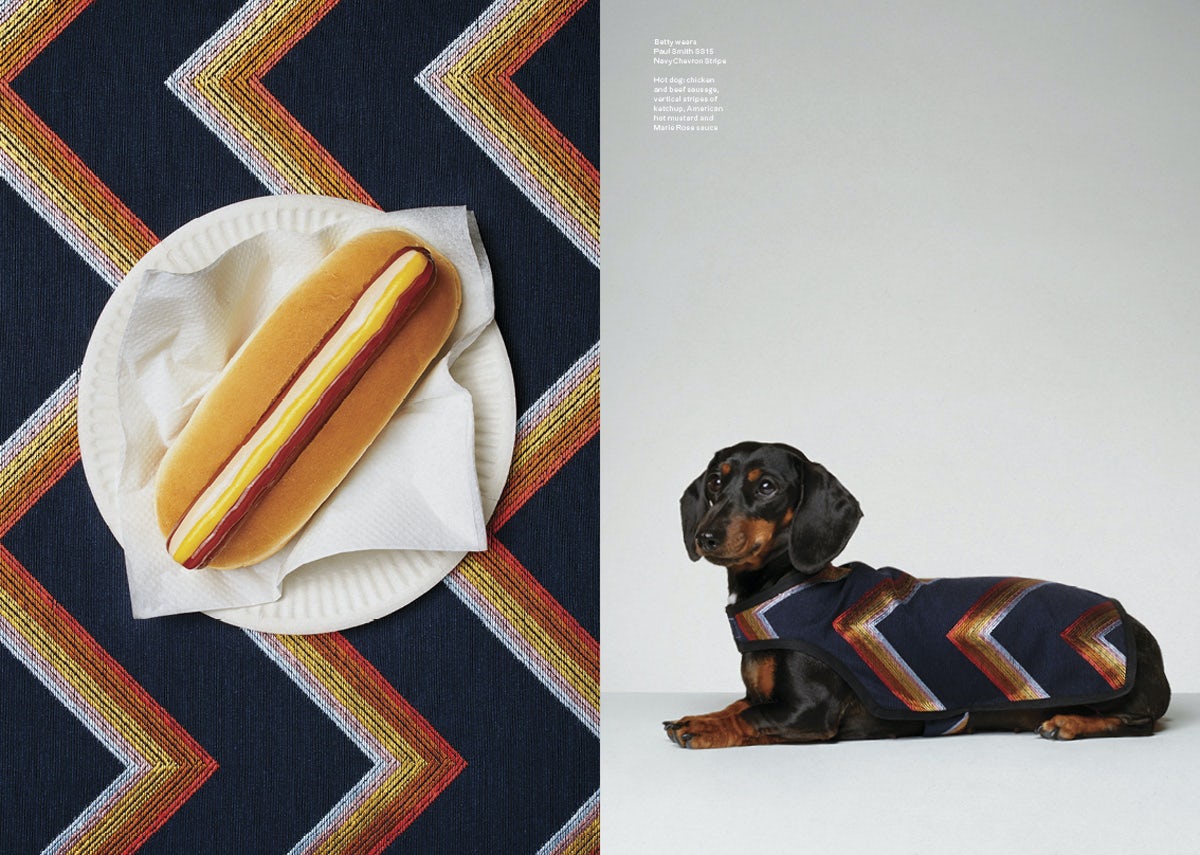 “I went to go see my friend in San Francisco a few years ago, and while I was there we saw wiener dog racing, which everyone seemed to know about and was a real thing. That was quite amazing. Back home, I know quite a few people who have sausage dogs, and they all have very distinctive personalities. We worked with a creative stylist called Peta O’Brien who created the hotdogs, fashion stylist Julian Ganio who was the fashion director at Fantastic Man at the time, Paul Smith who did the fabrics for their outfits, and Jess Bonham who shot it. What started out as quite a silly idea really pulled together when we had a great creative team to do it. O’Brien got really into it and started sending me 50-page documents of different sausages, onion slices, buns and all sorts of other things.”

The Dining is in the Detail 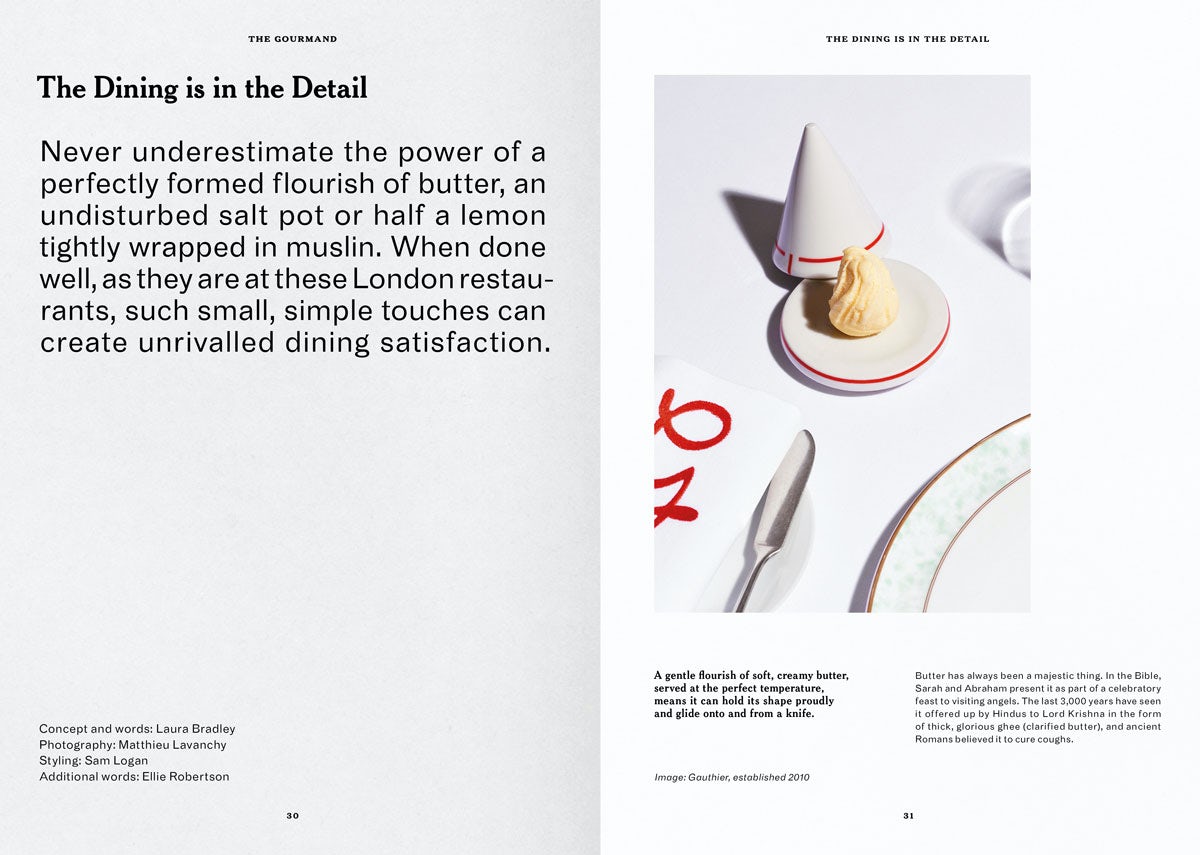 “This feature was about all the little details in restaurants, the sort of unnecessary details that you would never do at home. Ever since having a son and going out being a less frequent thing, it’s quite nice when you do go out for it to feel a little bit more of a show. While I used to love going to little neighbourhood places that felt like someone’s house, I think there’s something to be said for going somewhere that they wrap your lemon up in muslin, or make a nice shape out of your butter. The photography is accompanied by social-historical commentary on how these ideas came to be. They’re each shot at different restaurants around London so it wasn’t in the studio, and we worked with photographer Matthieu Lavanchy and the stylist Sam Logan to pick restaurants that were known for these little flourishes.” 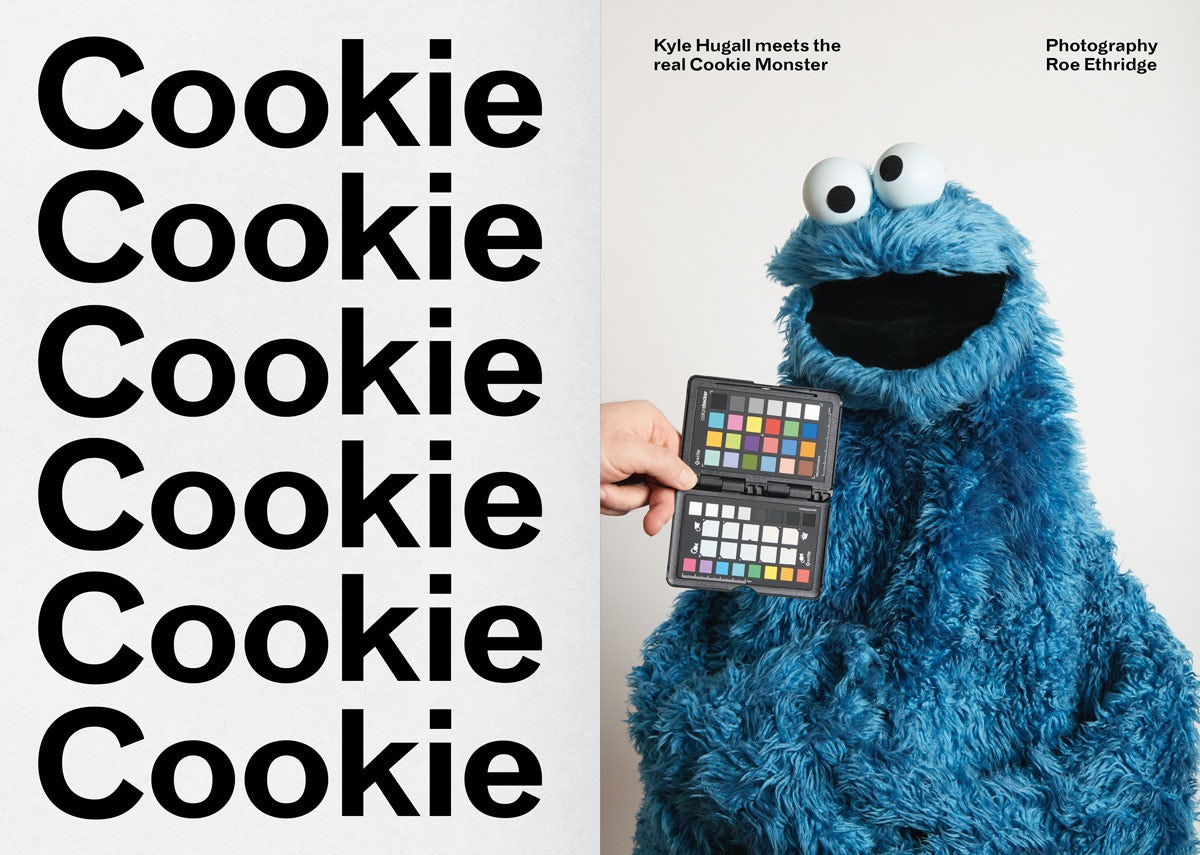 “We did an interview with the real Cookie Monster, which took a long time to organise and we had to have lots of conversations with Sesame Street. They were saying ‘Oh, what do you think about black and white imagery?’ and I was like ‘Well, it’s difficult because his USP is really that he’s blue’. We worked with Roe Ethridge who is one of those people who seems to be able to have an incredibly successful fine art career and a commercial photography career. Because his whole practice is about playing on the imagery of popular culture, he seemed like absolutely the best person to work with on this. We didn’t have lots of money, but once he told his kids that the Cookie Monster was coming over he had to do it. For the feature itself, we kind of liked this idea of a Vanity Fair style big interview, with the interviewer and photographer coming to the house of a celebrity. Cookie Monster had to have an art director just to make sure that his expressions were true to his character, and there were various drawers of different eyes with different expressions. His interview was really interesting actually, we were worried that it would be a bit like a press release but his ideal dinner party guests were mostly British singers from the 90s, like Neneh Cherry and Sade.” 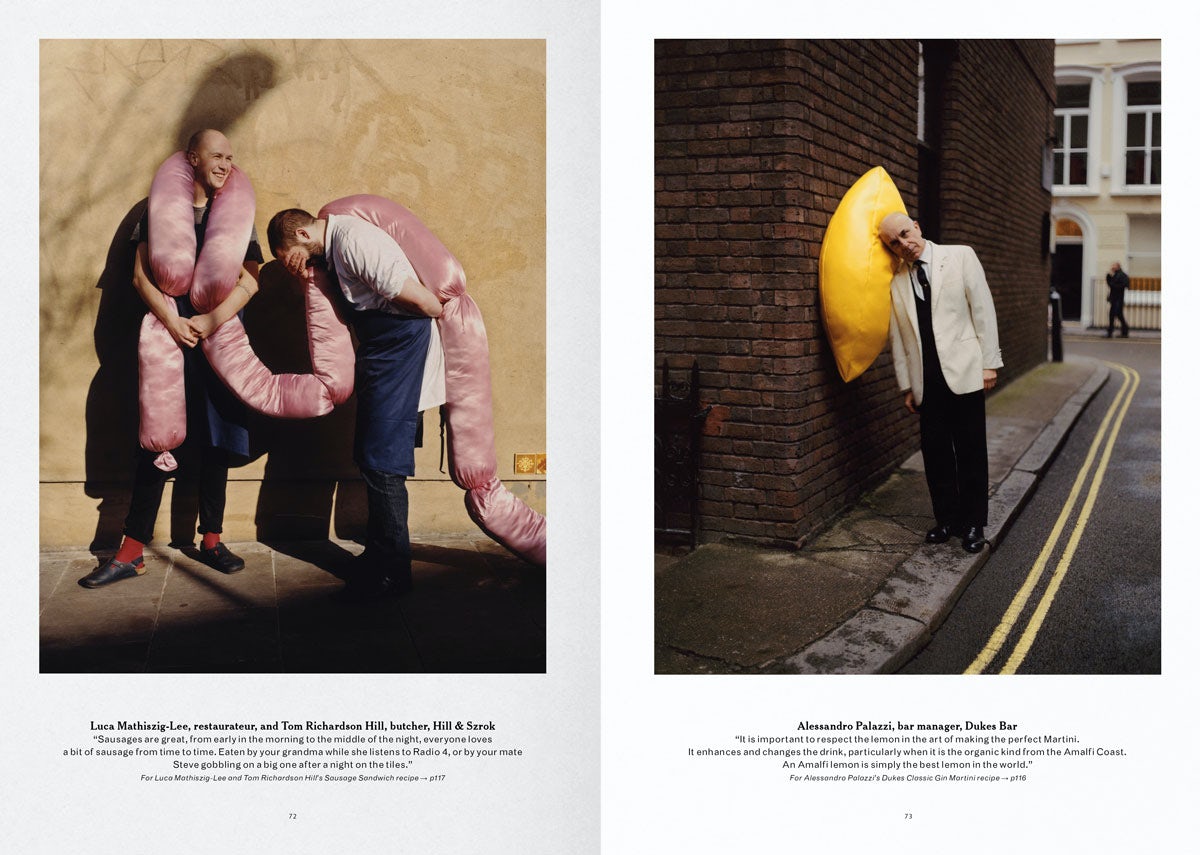 “We were talking to Jeremy Lee, the chef at Quo Vadis about how much he liked sardines, and he was saying ‘I just wish they were big so I could give them a cuddle’. We just really loved that idea, so we asked different chefs what their favourite ingredients were and worked with a set designer called Rachel Thomas to realise them in a huggable size. We worked with a photographer called Tom Johnson, who is fantastic and in his other work is slightly obsessed with twins. Jeremy was quite reserved in the end with his sardines, and there was also Sami Tamimi – the quieter half of Ottolenghi – who we photographed with his aubergine when it was snowing on a roof in Soho. Then there was Luca Mathiszig-Lee and Tom Richardson Hill from Hill & Szrok, and there was only one shot that was actually Insta safe. They then subjected passers-by to a little sausage show…”

The Princess and the Pea 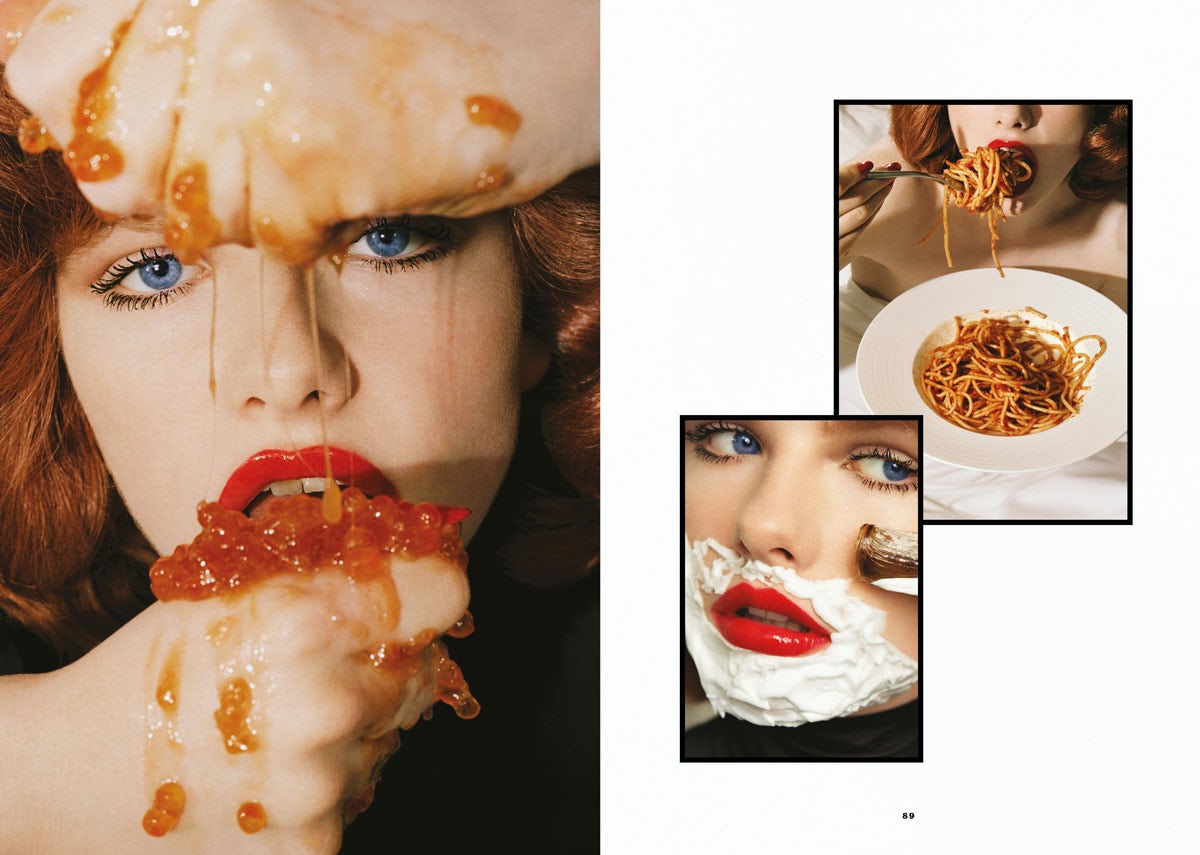 “This was a feature with photographer Harri Peccinotti who was the art director of Nova, an incredibly forward-thinking women’s magazine in the 60s and 70s. I’d seen his work in Nova and it was very ground-breaking at the time, but I didn’t realise he was still working actually. We said ‘Look we’ve got an idea about a girl who has a night off, goes to a hotel, orders everything and just has an amazing evening eating whatever she wants. Will you come and photograph it?’ And he did. There was something very raw and pre-retouched in his work. We mainly cast the model Edwina Preston because she just loves food so much and wanted to eat everything. It became a little homage to Peccinotti’s work.” 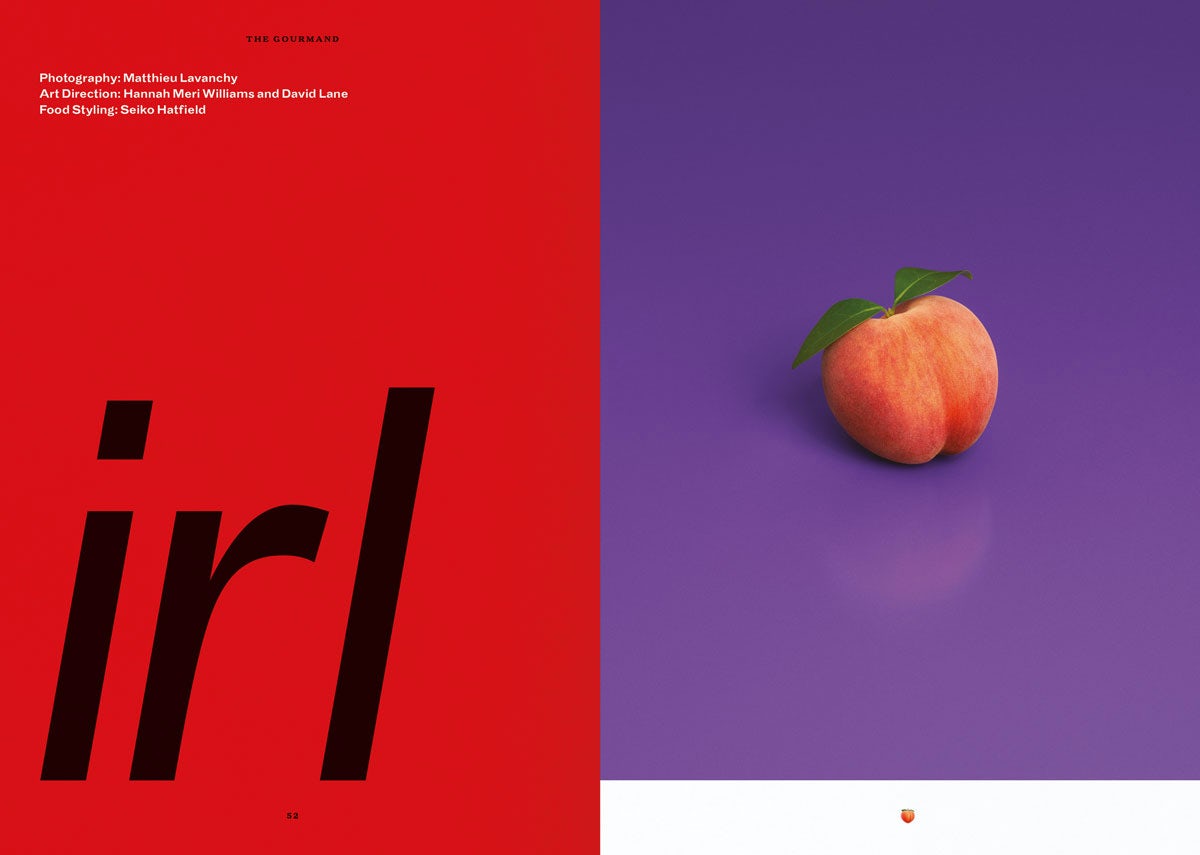 “This was the cover for the last issue. Art director Hannah Meri Williams, who was working with me at the time, said how much she’d like to create the food emoji that exist on our phones for real and work with a stylist to make the perfect representations of them. Emoji are something that we look at everyday and you kind of think they represent something, but when you start looking into it they’re actually quite far away. We worked with food stylist Seiko Hatfield and just started to look at the emoji. We realised that peaches, for example, simply don’t exist in that shape. Then we reproduced the emoji in real size on the page so that you can see them in context. We also made some t-shirts to go with the issue, and the banana, aubergine and peach became the bestsellers.”

David Lane was speaking at BBH London to coincide with its Insatiable exhibition, which is showcasing a selection of food photography from The Gourmand