Working Not Working canvased 6,712 members of its community to compile this year’s list. There was a dominance of freelancers in those contributing, with 58% participants being freelance, 24% full-time, and 11% describing themselves as full-time but moonlighting.

Those who took part answered a simple question: What are your dream companies to work for or collaborate with? It is important to note they were not encouraged to pick companies from a drop down list – instead were asked to write in their answers – and weren’t paid to take part. Over 4,000 companies were named this year, and from this a top 50 list, shown below, was defined. 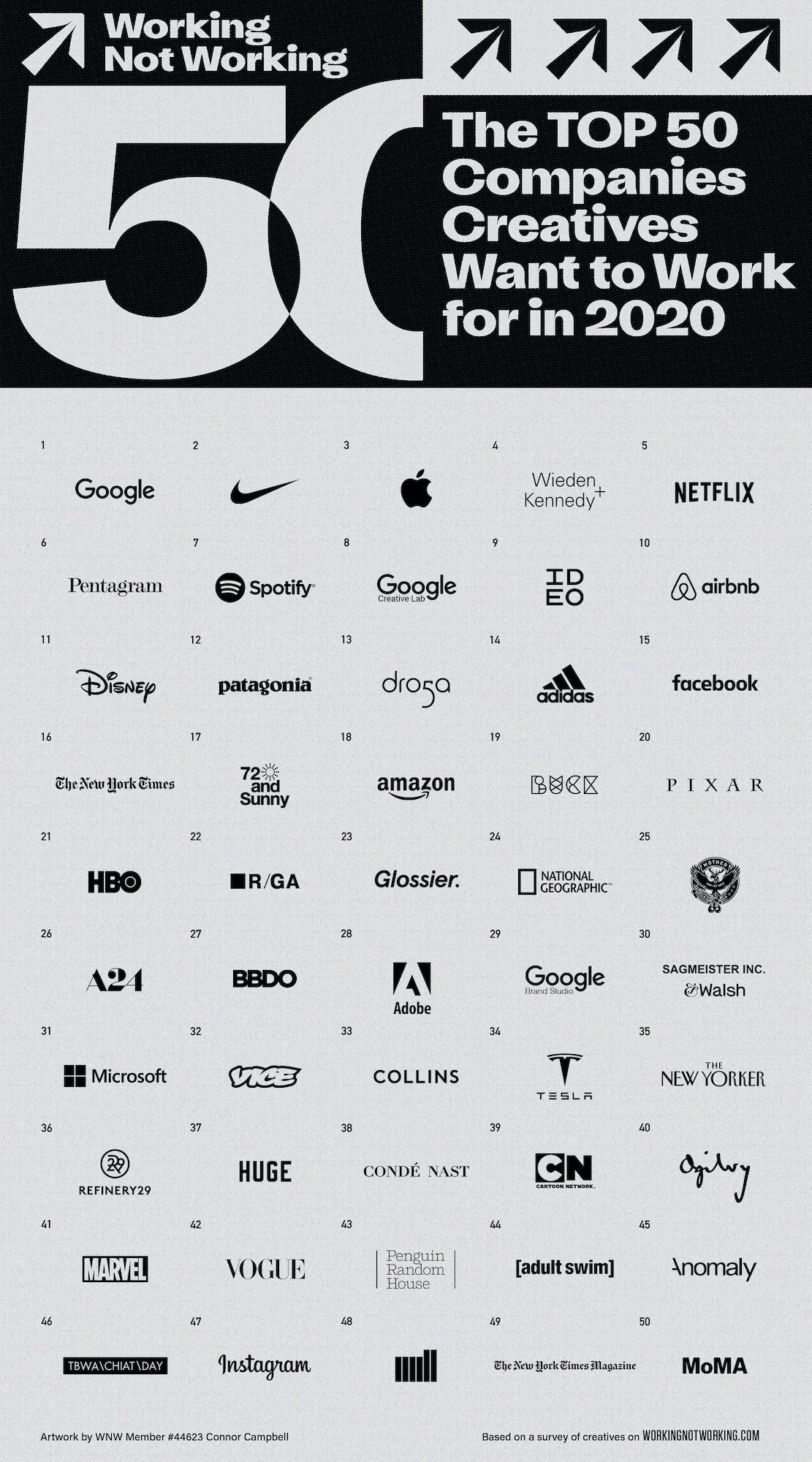 What can we glean from this? We all love a list but unlike some lists related to work, this one is not commenting on what it’s actually like to work somewhere – which would likely be more illuminating – it is instead asking for people’s ‘dream’ companies, meaning it is closer to a popularity contest than an informed list.

This is perhaps why so many brands and companies are included on WNW’s list for the sixth time in a row: this applies to Google, Nike, Apple, Wieden+Kennedy, Pentagram, IDEO, Airbnb, Disney, Patagonia, Droga5, 72andSunny, Buck, Pixar, R/GA, Mother, BBDO, and Tesla. Perhaps it’s more interesting to consider those that are new to the list, which include A24, Conde Nast, Marvel, Vogue, and New York’s Museum of Modern Art. Cartoon Network and The New York Times Magazine also return to the list for the first time since 2015.

As well as their dream workplace, participants were asked for additional input about what is most important to creatives in their career, with the top answers being creative independence at 26% and flexibility in hours and location at 25%. These responses perhaps reflect the amount of freelancers who took part although do tally with the growing demand for companies to offer more varied ways of working.

What is perhaps most telling here is the dominance of brands and tech firms (Google is on the list no less than three times, with the main company top, Google Creative Lab in at eighth and Google Brand Studio at 29th). There are a smattering of ad agencies and design studios throughout, but some of the UK’s biggest creative shops (adam&eveDDB anyone?) are entirely absent.

If this is a list of the companies that are the most alluring for creatives to imagine themselves at, it is also a sign that the notion of going in-house to work for a brand is no longer remotely off-putting to creatives, but instead thoroughly exciting – a fact that should make some advertising agencies and design studios distinctly nervous.